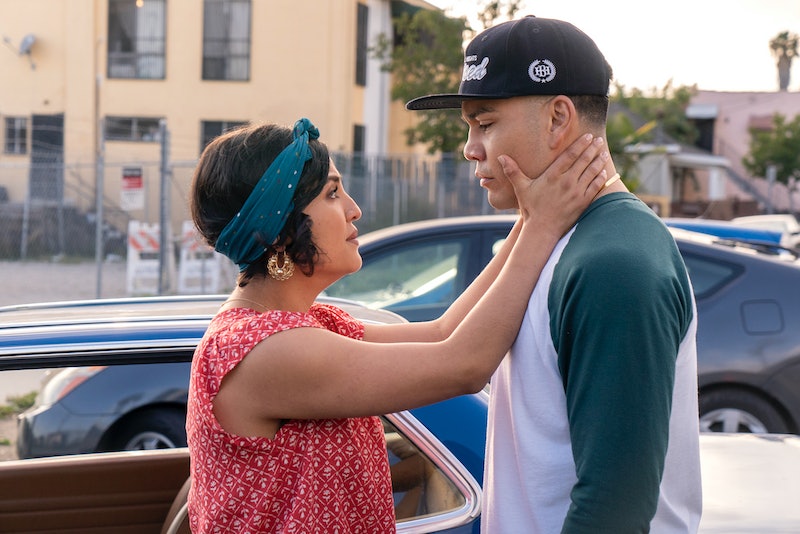 Netflix's Gentefied is a timely dramedy about what happens when the pull of community and heritage collide with the pursuit of the "American Dream." Co-creators Marvin Lemus and Linda Yvette Chávez explore this conflict through Chris, Erik, and Ana Morales, three millennial Mexican-American cousins living in L.A.'s rapidly gentrifying Boyle Heights neighborhood, who are trying to save their grandfather's taqueria while pursuing their own dreams. Lemus and Chávez tell Bustle that they didn't purport to have any straightforward answers for their characters' struggle to find a beneficial compromise through "gentefication."

Gentefied is a play on the term "gentefication," which is a combination of the English word "gentrification" and "gente," the Spanish word for people. It was coined by Mexican-American Guillermo Uribe, who opened the fancy Eastside Luv Wine Bar in Boyle Heights in 2007. Uribe defined the term to KPCC radio in 2011 as "the process of upwardly mobile Latinos, typically second-generation and beyond, investing in and returning to the old neighborhood."

"I started to see the potential of improving the community from the inside out," Uribe explained to Los Angeles Magazine in 2014. "If gentrification is happening, it might as well be from people who care about the existing culture." This is exactly what the Morales cousins attempt to do in Gentefied, with mixed results.

Formally trained chef Chris and business-minded Erik turn Mama Fina's into a hot spot for eager Yelpers and put it on an LA Weekly food tour map, but the changes inspire a local protest. Ana, meanwhile, finally gets her big break as an artist, but being commissioned by a white investor puts her at odds with her activist girlfriend and other Boyle Heights residents, who fear her art will attract tourists and hasten their own displacement.

The cousins' pursuit of the "American Dream," as Chávez puts it, is inherently individualistic and "very goal-oriented, the kind of culture where nothing can get in the way, even family." She continues, "But the cultural value that we carry, as Latinos and Mexicanos, is family. It's always coming back and showing up for them in any way that they need you to show up, which comes into direct conflict with taking that 'American Dream.' That's exactly the central core of what we're trying to explore in terms of identity in the show," the L.A. native adds.

It's fitting that Gentefied is set in Boyle Heights, an area that has seen an influx of upwardly mobile, college-educated, Mexican-Americans moving back into the area. Much like Chris and his chicken tikka masala tacos, these new residents are Latinx, but they're interested in the same fusion foods and Scandinavian aesthetics commonly associated with white gentrifiers. The argument for gentefication, as Ludwig Hurtado at Vice puts it, is it allows Latinx communities to "evolve without having their roots diluted into whiteness."

"For a long time, for our fathers and the older generations before us, to chase the 'American Dream' meant having to assimilate," Lemus says. In contrast, he sees gentefication inspiring in its own way, as Latinx creators rejecting the notion that they have to just be American and erase their multicultural identity.

"But of course, there's always the push and pull, and that's been so much of what we want to really dig into with the show," Lemus explains. It's a complex issue, and there are certainly people who disagree with anybody coming in and and trying to change Boyle Heights. After all, if young professional Latinxs move in, that potentially means higher costs of living, which could attract affluent white professionals to the community as well.

There's also the question of whether gentefication even stands a chance against gentrification. Despite Chris and Erik's efforts to modernize Mama Fina's and Ana's advancement in the art world, there's no happy ending in Season 1, and obviously there's a lot more struggles to come for the family and their neighbors.

"When we end the season, we find out no matter what they did, this bigger influence, which is gentrification, still comes in to take away everything they work so hard for," says Chávez. "So really the question is, is it worth sacrificing community for that? It's not black or white; this whole situation is very grey."

Gentefied offers no easy answers, but Lemus and Chávez hope the show will spark conversations about how nuanced and complex the issues are, and how even the most well-meaning Latinx professionals can have a hand in the way their community changes.

Lemus adds, "What we hope audiences take away is they'll no longer say that 'gentrification and change just happen.' I think that that's one of those things that really didn't sit right with us and we wanted to make sure that that's not something that people can really say after they watch."