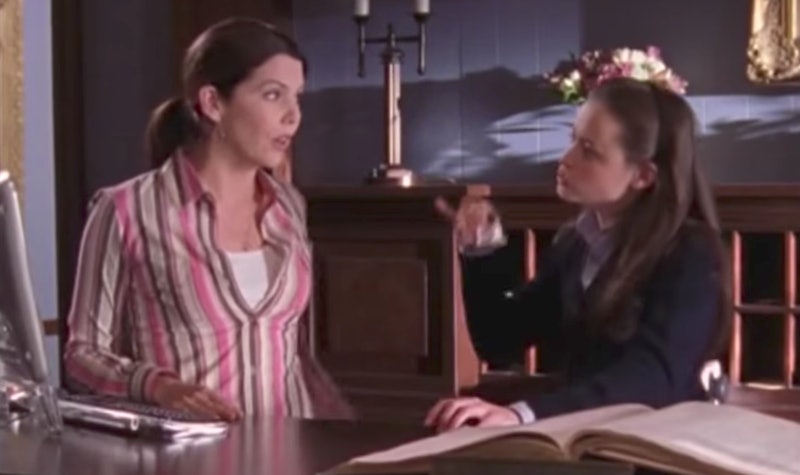 You might think you've got an encyclopedic grasp of the happenings in Stars Hollow, but there's still one Gilmore Girls cameo you never knew about, probably. At the Gilmore Girls Fan Fest in Kent in Connecticut, which took place over the weekend of October 20-22, the daughter of the late Edward Herrmann, Ryen, explained that she had made a cameo in an unlikely scene. While explaining that she finds "it a little surreal that you care what we have to say, even though we weren’t in it, we weren’t part of it," Ryen's mother Star broke in: "You were in it." Then, Star asked the audience, "Do you not recognize her?"

As Ryen then explained, Richard Gilmore's real life daughter got to take the role of one of Logan's sister's bridesmaids, Alexandra, in the Season 6 episode "Bridesmaids Revisited." If you're wondering why the episode sounds so familiar, that's because this is the one in which Rory discovers exactly how busy her boyfriend got during their break.

Playing the bridesmaid clearly made a mark on Ryen. She explained at the Fan Fest that she found it "overwhelming" and "very humbling" that Gilmore Girls still attracts so much interest years later and ascribed the show's success to it being "a timeless tale of just learning and growing and coming together" and tackling topics that "weren’t just for one generation but are these ongoing topics that you still have all the time."

Of course, it's easy to understand why she feels so warmly about the show. She was given a great, juicy role with Alexandra. When her fellow bridesmaid confides, "I want to hook up with someone tonight," Alexandra gets the wonderfully barbed line, “Just remember that pinning guys in corners and shoving your tongue down their throats can sometimes come off as desperate.”

When the other bridesmaids inadvertently contribute to the destruction of Rory's relationship when discussing possible hook up options, revealing one after another that they all either had sex or fooled around with Logan around Thanksgiving (or, OK, didn't, but only because they were in Biarritz), it's Edward's daughter who delivers some words of consolation without breaking character.

She points out to the younger Gilmore girl that, before she got with her own partner, he "slept with half of the Upper East Side and now he's as loyal as a dog." Despite the the slut shaming tone, it's a point that resonates with the audience long after Alexandra has left the room to go to the wedding. While it's clearly shocking to Rory that her boyfriend would hook up with so many people while they were on a break (not, from her perspective, a break up), her attitude seems a touch old-fashioned.

Sure, the fidelity question is huge. But her disgust seems as much about how many people he chose to sleep with — "a room full of girls you'd had sex with" — as about him cheating. Plus, as Alexandra's line emphasises, people's sexual behaviour isn't necessarily consistent.

Someone who's having a lot of sex in one phase of their life might never think of betraying their partner's trust later and these two things aren't mutually exclusive. Given Richard Gilmore's role in the series as someone embodying traditional values, it's ironic that Ryen's character's take on sexuality seems similarly old fashioned but still seems to raise progressive questions.

But it should be stressed that Ryen wasn't the only Herrmann daughter who got to craft memories on the show inspired by a key moment in Rory and Logan's relationship. Later in the panel, her sister Emma described her memory of being on set. She said, "I was maybe 8 and I was sitting with Alexis [Bledel]," who was babysitting her while wearing a blue dress and a scarf. "She was like 'Do you want to wear the scarf?' and I was like 'YES.' I realized later it was the dress and scarf she was wearing when jumping off the building." In other words, Emma got to wear the scarf the younger Gilmore wears during her brush with the Life and Death Brigade when she first seems to feel a spark for the wealthy blonde.

Of course, Richard Gilmore was one of the major characters on the show and it makes sense that his professional life and personal life would overlap on set. But who could have guessed it would do so in such a heartwarming way?

More like this
24 Years Ago, 'Friends' Dropped Its Most Underrated Ross & Rachel Episode
By Grace Wehniainen
Netflix Reveals First Look At Wednesday In The 'Addams Family' Spinoff Series
By Bustle Editors
20 Photos Of The 'Hocus Pocus' Cast Then & Now
By Radhika Menon
What Does Nancy Jo Sales Think Of 'The Real Bling Ring'?
By The Editors
Get Even More From Bustle — Sign Up For The Newsletter