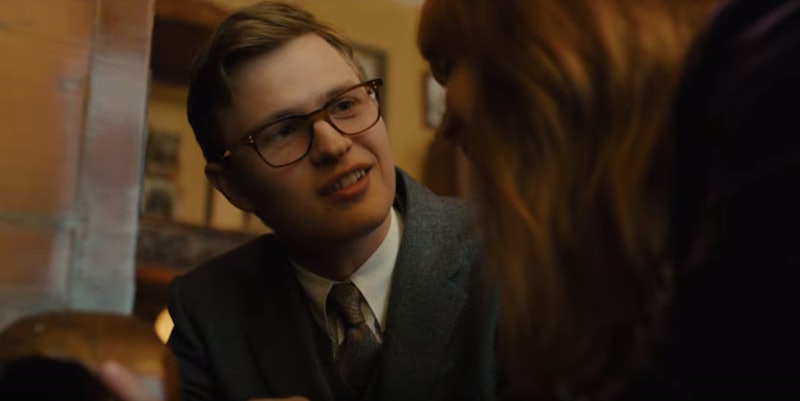 If you thought Donna Tartt’s Pulitzer Prize-winning novel The Goldfinch was an emotional shock to the system, that's nothing compared to what the film adaptation has in store. Starring Ansel Elgort and Nicole Kidman, The Goldfinch trailer — which was released by Warner Brothers on Wednesday, May 29 — tackles the concept of grief and tragedy and shows how it can go on to fundamentally shape someone's life.

The story centers around Elgort's Theodore “Theo” Decker, who is just 13 years old when his mother dies in a bombing at the Metropolitan Museum of Art. As one of the few survivors, Theo is overcome by guilt and sadness over what happened. His one form of comfort comes in the form of his mother's favorite painting of a goldfinch chained to a perch. He keeps the painting close to him at all times, feeling as though it serves as his one remaining connection to the loved one that he lost. Meanwhile, Kidman plays the role of Mrs. Barbour, a socialite friend of Theo’s mom who takes care of him after he is abandoned by his father.

It's a heartbreaking tale of grief and redemption and the complicated layers that come in the aftermath of severe trauma. So if you decide to see this one in theaters, you may want to bring a box of tissues with you.

Given the massive talent behind the project and the emotional gut-punch provided by just the trailer alone, it should come as no surprise that fans are already predicting that this movie could end up winning big during the next awards season. In fact, many believe that based on this footage alone, it could be one of the top Oscar contenders for next year.

Granted, there's still a long way to go before awards season nominations get underway, but from the look of things The Goldfinch will definitely be the one to watch this year. Whether you've read the book or are only now familiarizing yourself with the premise from this trailer, there's no denying how compelling these characters are and how quickly you can see yourself getting invested in what happens to them.

Elgort may be busy posting shirtless selfies on social media these days, but when this film hits theaters, he'll also be making you weep for an entirely different reason.

More like this
The First 'Percy Jackson & The Olympians' Teaser Comes With An Ominous Warning
By Grace Wehniainen
Read The First Pages Of Emma Rosenblum’s Highly Anticipated Debut, 'Bad Summer People'
By Samantha Leach
What Joyce Carol Oates Knows About Fame
By Erin Somers
Nicola Coughlan Shared A Lady Whistledown Excerpt From ‘Bridgerton’ Season 3
By Grace Wehniainen, Alyssa Lapid and Sam Ramsden
Get Even More From Bustle — Sign Up For The Newsletter