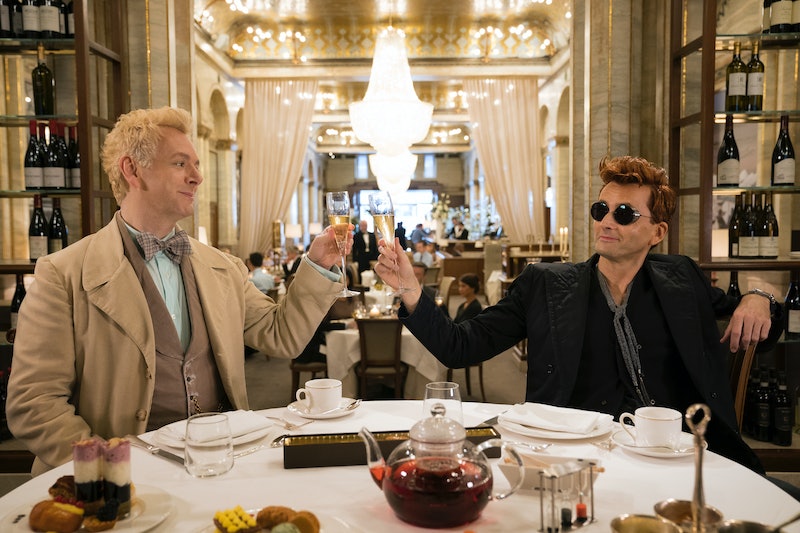 The end of the world is nigh in Neil Gaiman and Terry Pratchett's fantasy comedy Good Omens, a six-episode miniseries debuting on Amazon this Friday. Based on the 1990 novel Good Omens: The Nice and Accurate Prophecies of Agnes Nutter, Witch, the story centers on the angel Aziraphale and demon Crowley attempting to stop the Apocalypse because they realize they've grown to like their cushy Earth jobs, and in some strange way, even humanity itself. It's a comedic story about the ultimate clash between good and evil, so who better to narrate this tale than God? In the onscreen adaptation though, there's a major twist to this portrayal: in Good Omens, the narrator is Frances McDormand, which means that in this universe, God is woman, thank you.

According to The Hollywood Reporter, Gaiman announced at San Diego Comic-Con in 2018 that he always knew he wanted to be more creative with his casting: "We knew God had to be a woman. We were talking about great American actresses because we knew [we wanted it] to be an American voice."

Gaiman went on to describe how McDormand then emailed him out of the blue (despite the two having never met) and asked if she could use his house for a vacation in Scotland. Gaiman agreed, in exchange for McDormand coming on to the project. It's a pretty unusual turn of events, but a fitting tale for a show that seeks to push the boundaries of expectation and reality.

As God, McDormand is key to making sense of the story, as she leads the viewer through the centuries-long friendship between Aziraphale and Crowley. Voiceover narration is often despised in film circles because it goes against the "show, don't tell" rule often touted in school, but without it, many book-to-screen adaptations are unable to fully convey the intent and motivations of the characters. (We probably haven't forgotten that Game of Thrones didn't show Daenerys' conflicted thoughts from the books that led to her madness.) That holds especially true for a book like Good Omens, whose comedy and life is as much in the editorializing and footnotes as it is in the dialogue. Good Omens would just not be Good Omens if the whole thing was stripped down to only its characters words and actions.

"Pratchett’s witty observations and footnotes – those same flourishes that distinguished his Discworld series from all other fantasy novels – are present throughout, thanks namely to Frances McDormand’s fourth-wall breaking narration as an ineffable God," writes Jack Shepard at The Independent.

Like many portrayals of the divine, Gaiman and Pratchett's God is as knowledgeable as she is unknowable. She's there to serve as a sort of benevolent guide for the viewer, but it's also impossible to tell what her intentions are. One of the major themes of Good Omens is the question of divine will: does God actually know the end before it happens? If they successfully stop the Apocalypse, was that her will all along, or is it a sign that demons and angels can indeed outwit their own creator? Taking it one step further, does God not intervening either way mean she doesn't care what happens to them either way?

Speaking about the Christian creator in female terms has long been considered both a progressive and blasphemous act, so it's no wonder it's showing up in Gaiman's adaptation. Gaiman himself has often used his writing to deconstruct the meaning of gods and religion, and complicating the image of God seems like a fitting way to honor the late Pratchett's clever and satirical writing. Viewers can choose to read the writing as completely secular or actually religious — after all, someone who simply doesn't care about religion would not spend so much time exploring it. At the very least, it's clear McDormand plays an integral role in the show, and her position as the All Mighty lets viewers expand their conception of a religion traditionally thought of as patriarchal.

McDormand will be joining the likes of Alanis Morissette in Dogma, Ariana Grande in her "God is a Woman" music video, and Whoopi Goldberg in A Little Bit of Heaven for portraying God as a woman. Good Omens is likely to be full of delightful surprises, and McDormand as the narrator is definitely one of them.