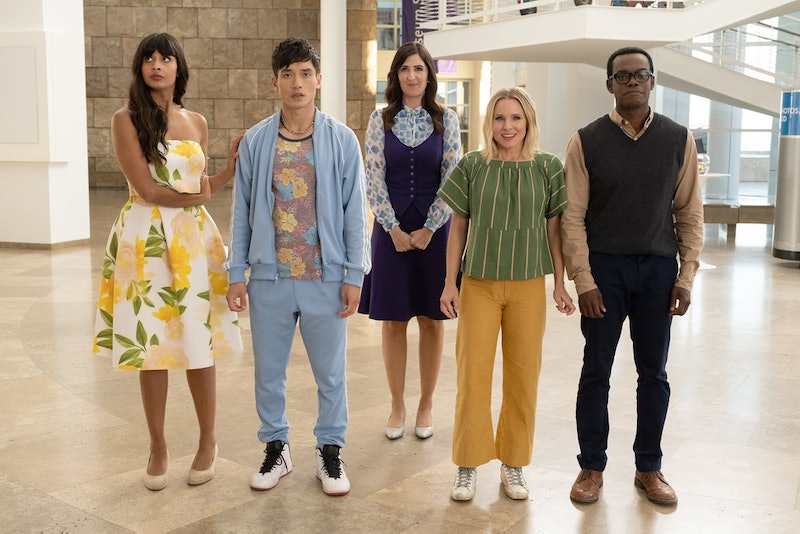 After more than three years on the air, The Good Place airs its series finale this Thursday, Jan. 30, which means the show won't be returning for Season 5. It's an unfortunate truth that might make you feel like you're being tortured in the Bad Place, but it's also something fans have known for a long time. Series creator Michael Schur announced last June that Season 4 would be The Good Place's last.

"After The Good Place was picked up for Season 2, the writing staff and I began to map out, as best we could, the trajectory of the show ... I began to feel like four seasons — just over 50 episodes — was the right lifespan," Schur said in an official statement posted to Twitter. "At times over the past few years we've been tempted to go beyond four seasons, but mostly because making this show is a rare, creatively fulfilling joy, and at the end of the day, we don't want to tread water just because the water is so warm and pleasant."

As a show that has made its reputation on reinventing itself, The Good Place was never intended to drag on forever. Its whole premise is that "you blow everything up before it gets boring," Schur told TVLine, and you can only do that so many times. Now that Eleanor and the gang have all become the best versions of themselves, saved humanity from eternal doom, and broached what feels like every possible moral and philosophical dilemma, there is an undeniable feeling of fulfillment and conclusion.

"It's such a specific idea, and it's such a specific flavor, and it has a very specific set of internal guidelines, in terms of how it runs, and so it'd just be betraying the very nature of the idea to try and drag it out any longer," Schur explained in the same interview with TVLine.

There are some questions we might never get an answer to, like what the Time Knife could possibly look like, but fans can be sure that the story is complete. "It is a full, series-ending, wrap-up," Schur promised to TVLine.

Much like the residents of the real Good Place must move on once they feel like their time in the afterlife has come to a close, so, too, must the show.

More like this
The 'Freeridge' Cast Shared Their Hopes For A Potential Season 2
By Grace Wehniainen
Netflix Shut Down 'Bridgerton' S3 Rumours About A “Very Dark” Storyline
By Bustle
'Bridgerton' S3 Will Show A *Very* Different Side To Kanthony
By Sam Ramsden
Shonda Rhimes Responded To The Surprise Exit Of A Day 1 'Grey's Anatomy' Figure
By Grace Wehniainen
Get Even More From Bustle — Sign Up For The Newsletter
From hair trends to relationship advice, our daily newsletter has everything you need to sound like a person who’s on TikTok, even if you aren’t.