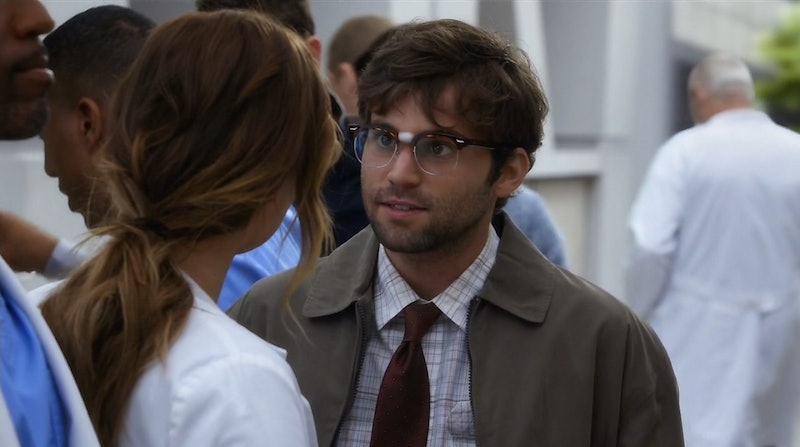 Let's be honest: Grey's Anatomy has only had one group of phenomenal interns. Way back and Season 1, viewers were introduced to George, Izzie, Alex, Cristina, and Meredith all fresh out of medical school and with no idea of what they were doing. But under the direction of Dr. Bailey and then Chief Webber, the five grew to become full-fledged surgeons. Well, most of them at least. (No shade to Izzie and R.I.P. George). Now, for Grey's Anatomy Season 14, six new interns will be entering the fold at Grey Sloan Memorial Hospital with seasoned faves (and the only two original interns remaining) Meredith and Alex to guide help guide them.

According to The Hollywood Reporter the long-running ABC drama will introduce the six new interns during Oct. 12's episode. Each new character will appear in their own "multi-episode arcs." And although it's likely that none of them will do heart surgery in an elevator, stick their hand in a bomb-laced body or cut an LVAD wire, the new group could provide some much needed comic-relief to the occasionally sappy series. The season's just started, but it's already brought to light plenty of romantic entanglements, surprise firings, deaths, and even an ironic brain tumor diagnosis for neurosurgeon Amelia.

So just who are the newbie doctors? Below meet the medical crew who have officially dubbed themselves "the six-pack," per one of the new actor's Instagrams. Not much is known about any of their characters or backstories, except that one of them has a bedroom decked out in comic garb and has a tendency to loose his spectacles at the worst possible times. We're also not sure of what's going to happen to each of them during their arcs, but let the hookups, drama, and botched surgeries that fans have come to expect from anyone studying at Grey Sloan begin!

Levi, played by Jake Borelli, made his debut to Grey's in the season premiere as a sub-intern. Someone should suggest that poor Levi invest in contacts going forward because while observing on his first day he leaned over the operating table and his glasses fell right into the open body cavity. Hence his nickname. One would think that this incident would cost him from going anywhere near the hospital or its doctors for a while, but no. In a semi-surprising turn of events, Levi hooked up with Jo, before she reunited with her longtime love Alex. Not sure what's next for Levi, but his awkwardness gives off some serious "George" vibes, so plan on seeing plenty of corny/cute moments from this intern.

Where you might know him from: CBS' Extant and Freeform's Famous In Love.

Where you might know her from: Grey's Anatomy! This will be her first credit.

Where you might know him from: NCIS, NCIS: Los Angeles, and 2 Broke Girls.

Where you might know her from: ABC's Of Kings and Prophets and Freeform's Bunheads.

Where you might know her from: MTV's Faking It and Blumhouse's upcoming Truth or Dare.

In their debut episode titled "Ain’t That a Kick in the Head," per the ABC press site, "Amelia confronts a difficult situation, while Meredith deals with the fallout from her conversation with Nathan. Maggie finds herself at an awkward family dinner, Jackson receives big news, and Richard and Bailey search for the stars of tomorrow." Could those stars be these six new interns? Find out when Grey's Anatomy airs Thursday at 8 p.m. ET on ABC.

More like this
'Grey's Anatomy's New Intern Got Advice From Dr. Bailey Herself
By Grace Wehniainen
'Heartstopper' S2 Just Welcomed Four Brand New Cast Members
By Nola Ojomu and Sam Ramsden
'Elite' Season 6 Is Arriving Sooner Than You Think
By Gretchen Smail and Grace Wehniainen
The ‘You’ Season 4 First Look Shows Joe’s New Identity And Potential Victims
By Bustle Editors
Get Even More From Bustle — Sign Up For The Newsletter