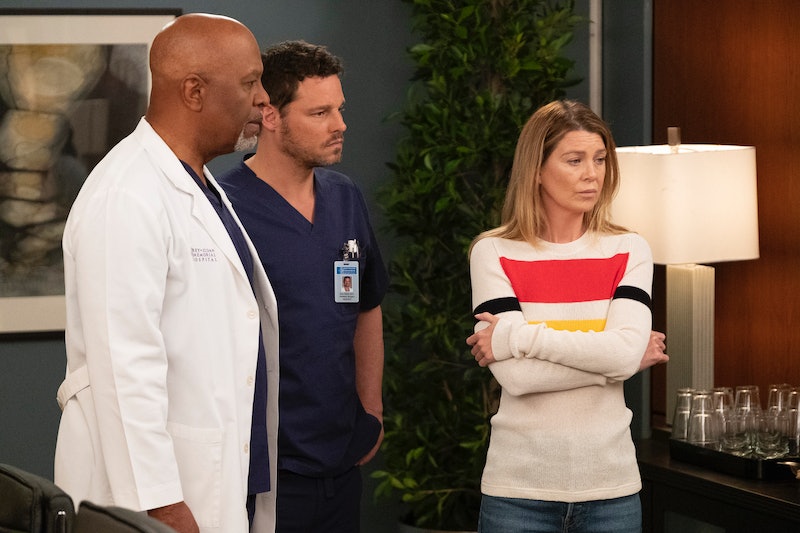 Grey's Anatomy fans have gotten used to the core players of the show mostly being OK when it comes to major cliffhangers and deaths and the like. For example, no one really thought Alex would go to jail for beating DeLuca up a few seasons ago. But in the Season 15 finale, Grey's Anatomy threatened Meredith, Alex, Jackson, and Richard Webber's careers and lives on the show. In fact, one of the only people who looks to be safe right now is the one who looked the least safe last week — Andrew DeLuca.

After Meredith got out of the oxygen chamber, she immediately went to try to help DeLuca. Last episode he tried to take the fall for Meredith after she committed insurance fraud to help a child seeking asylum. He was carted off to prison, but Meredith didn't want that for him. Even though he was trying to spare her family from losing her, Meredith has always stood by what she's done (good and bad) at the hospital, and this case was no different. And, just like when she got fired for messing up Derek's Alzheimer's trial, she got fired this time too when she confessed to Bailey that she'd committed the fraud, not DeLuca.

But Meredith wasn't the only one who got fired. Bailey also fired Alex and Richard Webber because they tried to take the fall for Meredith too (and because they'd both known about the fraud and not reported it).

At first it looked like it was going to be Denny's cut LVAD wire all over again. You know, when all the interns said they'd cut the wire to prevent Bailey from firing the true culprit. Bailey wasn't having it. She told them this was not the same, and they're not interns. So she fired them all. Even Catherine, Richard's wife, didn't step in to try to save him. At the end of the episode, Alex asked if he was really fired. "Alex Karev, I hate it more than you do," Bailey said, answering his question with a yes.

But while Alex and Webber may have lost their jobs, Meredith could be going to jail. At the end of the episode, she visited DeLuca in prison and told him that she was going to turn herself in to get him out. She told him that she stood by her decision to help the little girl, and how she went about it. She decided to take her chances explaining that to a judge, and she hinted to Alex earlier in the episode that she thought she stood a good chance of getting off because she was an award-winning surgeon.

In a real world circumstance, that wouldn't necessarily be enough to avoid prison time for fraud, but this is Grey's Anatomy and so Meredith Grey is essential to the show. It's possible the jail and court thing will play out over a few episodes next season, but expect Meredith to end up OK and eventually get her job back like she has every time before (Webber and Alex too.)

OK, but what about Jackson? His fate is a little fuzzier. Maggie and Jackson spent the whole episode trying to leave their campsite and get home in the severely rainy and foggy weather. They also had a pretty bad fight, where Maggie accused him of being too privileged to ever understand real hardship and he accused her of not being willing to try new things. They eventually reached their car but had to pull over because the fog was too thick. Jackson got out to check on something and, by the end of the episode, he'd disappeared. Maggie called out for him but he didn't answer. Is Jackson lost in the fog and in danger? Probably yes, but probably not for long. However, it is completely possible that the #Jaggie romance won't survive into Season 16 after that brutal argument. So there was technically one casualty this episode.

It was tough for fans to watch all their faves be put in jeopardy, but one good thing did happen. Teddy had her baby and she named her Allison after her friend who died in 9/11. Of course, it seems like she and Owen are back together which is a Very Bad Thing if you're me or anyone who thought Teddy and Koracick were way, way better together. Basically, Season 15 wasn't kind to your faves, but hopefully Season 16 will put everything back together again when it premieres this fall. Now the waiting begins.

More like this
'Grey's Anatomy's New Intern Got Advice From Dr. Bailey Herself
By Grace Wehniainen
This Episode 6 Moment Foreshadows Viserys' Fate On 'House Of The Dragon'
By Grace Wehniainen
Here’s Where You Can Stream 'Schitt's Creek' After The Comedy Leaves Netflix
By Brad Witter
Jeffrey Dahmer’s Arresting Officer John Balcerzak Got His Job Back After Being Fired
By Grace Wehniainen
Get Even More From Bustle — Sign Up For The Newsletter