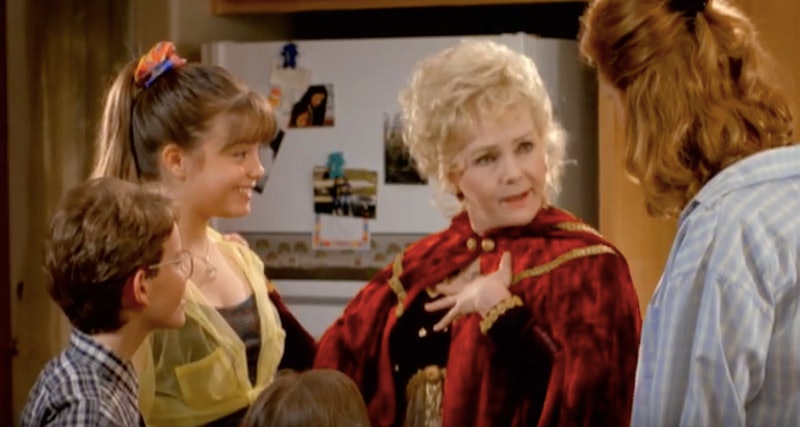 For nearly 20 years, Halloweentown has been a Disney Channel Original Movie staple. The seasonal classic has it all: Witches! Humor! Freakiness! A spooky bad boy! Now, after those two decades, one question will finally be answered. It's the question of which Halloweentown character you relate to most, based on your sign. Yes, Virgos; you're Dylan Piper. You don't love it, but you knew it was coming. Just figured it was best to get that one out of the way.

Halloweentown premiered in 1998, when the world looked more than a little different. For some reason, though, the film never gets old. Who cares if cell phones probably would have made a difference, or that if Marnie had a laptop, she'd for sure be a Tumblr queen? So much of the movie's magic (pun intended) stems from technology not being an option. Even the low-key special effects are a gem. Somehow, the authenticity is spookier than CGI could ever be.

Below you'll find the Halloweentown character you relate to most, based on your sign — and yes, a few characters from the sequel are included. Has anyone ever lost one sock without thinking of Gord? Unlikely. But which zodiac sign does Gord capture the best? Scroll down and find out.

Kalabar, one of the creepiest villains in the DCOM canon, is extremely Aries. Self-confident, self-assured, and self-centered, Kalabar kicks off the Halloweentown zodiac by trying to take over his hometown. It's not crazy to want power. His frightening, over-the-top, someone-absolutely-should-have-told-him-there's-a-less-intense-way-to-do-this methods are the bad part. Kalabar is like the only Aries who has ever finished a project. And how does it end for him? Not well.

Taurus men are typically relaxed and patient, and Taurus women are bold, unapologetic, and not always instantly likable. Sorry! Chalk it up to society's fear of powerful women? Anyway, Taurus and Libra are the only signs both ruled by the planet Venus, which is why it's so fun to watch the ticket-taking duo go head-to-head-to-head with Gwen Piper. After all, Venus presides over beauty and grace and love! Communication is Mercury's domain. These guys aren't 100 percent Taurus, but they're bullish and fussy enough to be an Earth sign on a bad day, which they're clearly having. And on Halloween, no less.

The Cromwell matriarch is playful and unpredictable. Aggie lives a double life, at once a cuddly grandmother of three and renowned witch from Halloweentown. The classic Gemini is quick-witted and sociable, but grows restless and introspective just as quickly. If your grandchildren's heritage was being squashed in a boring suburb, you'd be a lot to handle, too.

Admittedly, this one is a stretch, but the resident elf of Halloweentown is pretty Cancer. Astrid is naturally sweet and kooky. She's even friendly with people who are less than polite to her. When Kal casts a Gray Spell on Halloweentown, she just becomes bummed. Everyone else morphs into some degree of "normal," as it's understood by humans, but without her chipper, protective shell, Astrid is the mayor of Gloomsville.

Leos tend to exude an untouchable energy. They're hot, but they know it, and they literally do not care who disagrees. Anyone who's against a Leo is just jealous of their success. Kal is vengeful, but more restrained than an Aries would be. (It's fitting that he's the son of one.) A lion's gotta roar, though, and when they do, they roar loudly. Is it possible that your temper could use a little work?

Yup! No surprises here. Practical, skeptical, and bookish, Dylan Piper is the most Hermione aspects of a Virgo, personified. Virgos are way more fun than pop astrology gives us (uh, them) credit for, but Dylan's not there yet. Even when faced with literal evidence of his magical ability, he questions it, and would you look at that watch? Buddy. Virgo men are, by nature, obsessive, tense, and a little fragile. They will also be a little offended by this read.

Libra, the second Air sign, is similar to its predecessor, Gemini. There's a duality that occurs with both, with Gemini's twins and Libra's scales. When a Libra suppresses their instincts, they're thrown out of balance. For example: In trying to repress her family's supernatural nature, Gwen becomes uptight, anxious, and exasperated. An actual witch trying to cancel Halloween? What did she think was going to happen?

In a world brimming with inscrutable men, the Scorpio reigns king. Scorpio men are passionate, charming, and impossible to read. Luke is the resident jerkoff of Halloweentown, but he's also a cutie with a good (if damaged) heart. Luke's blasé demeanor, dumb vest, and the fact that you kind of hate him make him the ultimate '90s crush. He's so Scorpio, it's weird that his "real" look is just a goblin.

Sagittarius is, undeniably, the most fun of the Fire signs. Sagittarians are less aggressive than Aries, and less psyched on themselves than Leos. They're also more artistic, energetic, and easygoing. Like a true Sagittarius, Sophie could do with a bit of impulse control. To be fair, though, she's a teeny witch deprived of Halloween. Who could blame her for having a sweet tooth?

Oh, Gord. Brisk, aloof, Gord. Cold, intimidating, iconic Gord. Whose home is, somewhat confusingly, as colorful and cozy as his personality is not. Capricorn — Winter's Earth sign — this Gord's for you. Check in about it next week? Or, you know, whenever you're ready to be around other people again.

Intelligent, individual, determined: These are the qualities of an Aquarius girl. Marnie may get a little wrapped up in her own uniqueness, but that's only because her real identity has been concealed from her. Aquarian energy is positive, and directed towards others. No wonder she spends the entire Halloweentown franchises trying to help other people. Interestingly, Sophie's Sagittarius energy and Marnie's intelligence make for an excellent (and creative) problem-solving pair.

Benny's having a good afterlife! He's a chatterbox with a job that lets him jabber the ears off of his customers. That makes sense; empathetic, emotional Pisces does best when surrounded by the good energy of other people. The most gregarious cab driver in Halloweentown is sensitive to criticism, but endearing nonetheless. Tip your Pisces, folks. They'll fall in love with you either way.

So, there you go — the question of which Halloweentown character you relate to most, according to astrology, has officially been answered. Quick note: A protective spell was cast over this list, so no changes can be made. The pairings are final. Happy Halloween!

And for more spookiness, check out Bustle's new docu-series, What's Up Boo?, where ghosthunters seek out feminist spirits from the past.