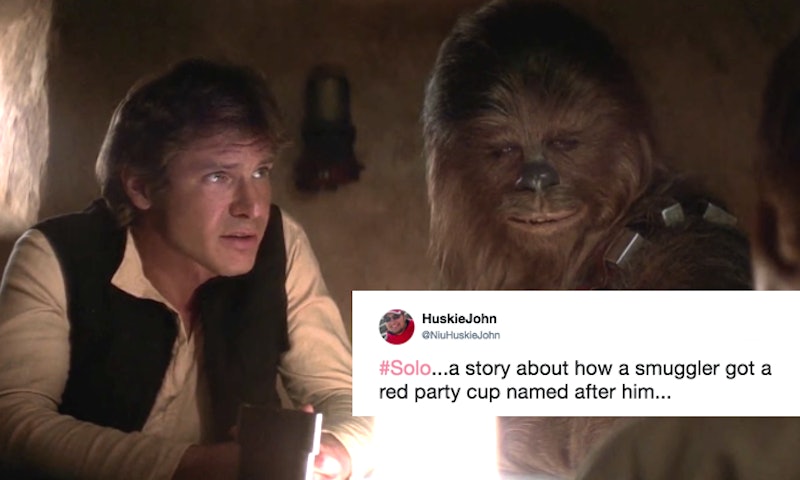 One of the moments that Star Wars fans have been waiting for has finally arrived. The Han Solo spin-off has a title, and it's very short: Solo. Or, rather, Solo: A Star Wars Story. No, really. The message came directly from director Ron Howard, who tweeted a video revealing that the film starring Alden Ehrenreich, Emilia Clarke, and Donald Glover just wrapped production. Given the fact that simply calling it "Solo" makes the upcoming spinoff sound like it is a spoof of a James Bond movie or something, Twitter was quick to respond to the news, in the best way Twitter knows how to respond to news.

In his video, Howard speaks into the camera and thanks the cast and crew before saying, "To the fans out there, I hope you've enjoyed the pictures that I've been sharing, pictures that I've taken from the set — can we even say the name of the movie?" Then, Chewbacca, Solo's co-pilot on the Millennium Falcon, hans Howard a poster with the movie's title, Solo: A Star Wars Story. Then Howard tells his fans, "I'll see you next year," as the film is set to hit theaters on May 25, 2018.

And then check out the best responses — some of which making jokes about Solo cups. It was bound to happen, after all.

Other commenters didn't hold back in straight-up dissing the lack of creativity in the Han Solo film.

And corny dad jokes were made.

Without the "Han" part, Han Solo's name can be a little confusing, apparently.

And others voiced their concerns that maybe they should have taken a little bit more time to workshop some ideas before making the big announcement.

Dan Casey of Nerdist cut to the chase and edited the title to be the movie that everyone actually wants.

Reading everyone's responses to the unveiling of the title for the film about Han Solo is almost as satisfying as reading everyone's responses to the news about the Star Wars spinoff's director drama. No, it hasn't exactly been smooth sailing for this film to get off the ground after the duo behind Solo, Phil Lord and Christopher Miller, dropped out of the film in June. It was a surprising move, especially considering that the film had garnered so much excitement, what with newcomer Alden Ehrenreich taking on the role of young Solo and big-names like Emilia Clarke, Woody Harrelson, and Glover, joining him.

At the time, Twitter was again ready to provide jokes about the hyped-up film lacking a director, so it's no surprise that now Star Wars fans are quick to laugh about the reveal of the name, Solo.

Despite the director drama midway through filming, Solo still maintains its May 2018 release date, and its writers had experience working on other Star Wars films so it will likely have a similar tone to other films that are so well-loved. The plot sounds exciting too, as Solo will provide the long-speculated backstory of the infamous smuggler who Harrison Ford played Solo in Lucas' first three Star Wars installments. Considering that Donald Glover is playing Solo's untrustworthy "frenemy" Lando Calrissian, it has potential to be one of the funniest Star Wars films yet, so really everyone's jokes on Twitter about the obvious name choice could be fitting for the film's tone.

While not too much else besides the cast, the director drama, and now the title is known about the upcoming Han Solo origin story, all of the behind-the-scenes pictures that Howard posted on Instagram make it look like everyone had a lot of fun on set. They might call it a singularly good time. Or, more fittingly, a Solo good time.

More like this
Mariah Carey Is Releasing Her “Lost” '90s Grunge Album
By El Hunt
A Deeply Scientific Investigation Into Alex Turner’s Many, Many Hairdos
By El Hunt
Margot Robbie Breaks Her Silence On *That* Viral 'Barbie' Moment
By Maxine Harrison
The First 'Percy Jackson & The Olympians' Teaser Comes With An Ominous Warning
By Grace Wehniainen
Get Even More From Bustle — Sign Up For The Newsletter