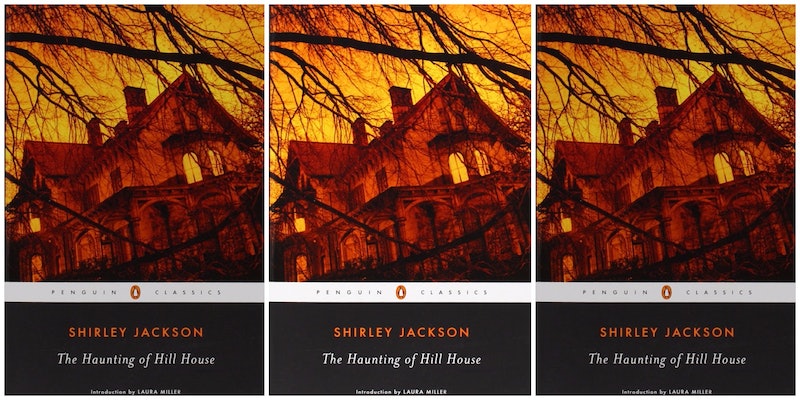 Good news, horror fans! Shirley Jackson's 1959 novel The Haunting of Hill House is coming to Netflix as a 10-episode limited series. I've got all the details we know so far, so grab your security blanket and keep reading!

The Haunting of Hill House has entranced and horrified readers for nearly 60 years. The novel follows a hastily assembled team of paranormal investigators into the eponymous, abandoned manor. The group's leader, Dr. Montague, is sure he will find scientific proof of ghosts and ghoulies inside, in spite of the fact that Hill House has not had any supernatural occurrences in its past, just a lot of unfortunate deaths. Montague's "assistants" on this quest are Eleanor, a woman who has spent more than a decade in service to her ailing mother; Theodora, an enigmatic social butterfly; and Luke, whose aunt owns Hill House. During their stay, the team finds themselves affected by something inside the house — its legacy, perhaps, or maybe actual ghosts — and at least one of them will meet a grisly end before the final page.

Netflix's The Haunting of Hill House adaptation won't be the first time that Shirley Jackson's novel has made it to the screen. Two film adaptations, both titled simply The Haunting, hit theaters in 1963 and 1999.

The Haunting of Hill House by Shirley Jackson, $11, Amazon

When it comes to an Internet-connected device near you, The Haunting of Hill House will likely differ much from the Jackson novel and previous film adaptations. Some fans may take issue with the fact that the Crains — the unlucky family that initially owns Hill House in the book — have been recast as the Cranes this time around. The Netflix series will focus on Steven Crane, who garnered fame from the books he authored about growing up in Hill House with his siblings.

Netflix has put together a crack team to bring The Haunting of Hill House to its streaming platform. Mike Flanagan (Hush, Gerald's Game) will write, direct, and executive produce the series, which is currently set to star Timothy Hutton, Carla Gugino, Michel Huisman, Elizabeth Reaser, Kate Siegel, and Henry Thomas. Best known for his role as Daario Naharis on HBO's Game of Thrones, Huisman will portray Steven Crane himself. Although little information is known about who has been cast in what roles, Deadline predicts that Reaser and Siegel are slated to star as the Crane children, with Hutton and Gugino cast as their parents.

No release date for Netflix's The Haunting of Hill House has been announced at this time.

More like this
These 25 International Horror Movies On Netflix Prove Fear Is A Universal Language
By Bustle Editors
Read The First Pages Of Emma Rosenblum’s Highly Anticipated Debut, 'Bad Summer People'
By Samantha Leach
What Joyce Carol Oates Knows About Fame
By Erin Somers
What Is A "Hot Girl Book" & Why Is Everyone Talking About Them?
By Samantha Leach
Get Even More From Bustle — Sign Up For The Newsletter