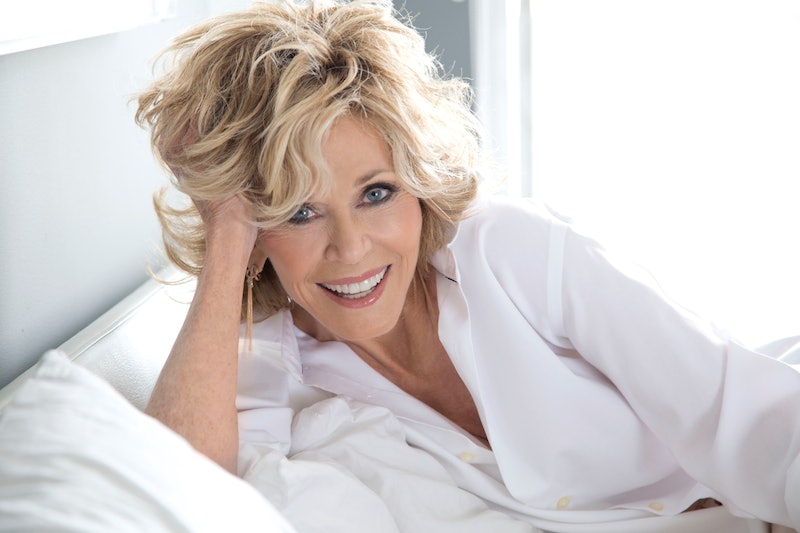 You could say Jane Fonda is fed up: with the current administration, with the fact that so few people vote in midterm elections, and with the way female farmworkers are treated in the U.S. But don’t, for a second, make the mistake of thinking the 80-year-old icon is getting tired of fighting, because that's far from the truth. Fonda, though largely known by many fans for her decades of acting in movies like 9-to-5 and Barbarella, has also dedicated 60 years of her life to political activism — much of which is chronicled in the new documentary, Jane Fonda In Five Acts (directed by Susan Lacy and available on HBO Sept. 24). And while many of the fronts she fought on long ago — for equal pay for women and civil rights, and against war and the spread of misinformation — are the very same fronts so many of us are fighting for now, she’s got more than a few things keeping her fueled up.

First, she’s seen that her activist work, well, works. “I have experienced in my own self and witnessed in others, profound change, really from black to white, like flipping a coin," she says over the phone one late September afternoon. "When you know that that potential exists for a profound transformation of a human being, that gives you a lot of your engine is constantly stoked."

Second in line is Fonda's dedication to self-care — and not the Netflix, PJs, and delivery variety. “I go full throttle and I’ve done it for as you say over 60 years but I also make sure I get a lot of sleep, I eat healthy, I work out," she explains. "Health has a lot to do with it. It’s hard to keep going if you’re not healthy and a lot activists let themselves burn out.”

Third is curiosity and a thirst for knowledge. Says the actor, “I’m constantly studying and listening and watching and that also gives the wherewithal to keep going and not burn out.” While all this is clearly effective, what's been most impactful for Fonda is a term itself probably isn’t going to enthrall the masses any time soon: Empathy. “When you have empathy and you really want to do something for people, that fuels you, that gives you energy,” she says.

Fonda has been doing interviews to support the HBO doc all day, but when she speaks that one simple e-word, it’s impossible not to feel the energy coming through her. She’s downright fired up. And of course, she’s got reason to be. “I think that because of the attitudes and values of the current administration, empathy has become a precious commodity, there’s not enough of it. We need more of it," she says. "In other words, we need to be able to feel compassion and empathy for those who are outside our own particular [spaces], including empathy for people who don’t agree with us. She specifies that she means those who voted for President Trump, many of whom, she points out, felt left behind and excluded in national conversations.

Of course none of this is a new concept — crossing the aisle, seeing things from both sides, understanding the voters who felt dismissed for decades. But when Fonda speaks about it, something tells me she’s not paying lip service, simply repeating the mantras we’ve all been taught to say in these tumultuous times.

That something is the breadth of her entire life; as the documentary details, Fonda has come a long way in her 80 years on this earth. She’s been through three marriages (director Roger Vadim from 1965 until 1973, activist Tom Hayden from 1973 to 1990, and billionaire Ted Turner from 1991 to 2001). She’s weathered family turmoil, including losing her mother when she died by suicide when Fonda was just a girl, and attempting to patch up her difficult relationship with her father, who she says often called her “fat” when she was a teen. She’s been accused of rooting against U.S. troops thanks to an ill-advised anti-war tour which resulted in a photograph of her behind enemy lines during the Vietnam War, misinformation about which still survives all these years later (just take a look at Megyn Kelly’s 2018 comments about the “Hanoi Jane” period for evidence). “It still makes me sad,” the actor admits.

But she’s come through all of it to live her best, most authentic period of life yet (the “Jane” act of the doc's titular five). To get there, as the film details, Fonda not only had to find herself, she had to root out her empathetic side, and learn to see things from the perspectives of her mother, her father, her ex-husbands, and those who were so certain her activism was, and is, anti-American.

“Something that I’ve learned as I’ve gotten older is the importance of forgiveness. It’s really hard to get old and hold a lot of grudges,” she says with a slight chuckle. “It’s important to go back and understand why people did what they did even if they’ve hurt you, to try and understand what their reasons were. Half the time, you’ll find out it had nothing to do with you, it was their own issues they were dealing with, and you’re able to forgive them and yourself.”

Of course, even after taking that journey of understanding into the past and finding forgiveness for herself and the people who raised her, Fonda still considers herself “vulnerable” to the effects her upbringing had on her, most notably the societal pressure for women to remain youthful and beautiful for as long as possible.

“Girls and young women who grow up with feminist mothers who were brave enough to resist the cultural pressure and who allowed the daughter to feel good in her own skin and that she is worthy as a person in her own right. These are women who are going to be less vulnerable about societal pressure as to how they’re supposed to look and how they’re supposed to behave. Not all women have that kind of mother or female influence,” she says, noting that though she’s surrounded by a circle of fierce feminists now, including Gloria Steinem and Lily Tomlin, she lacked that perspective as a young girl.

In the doc, which was filmed in 2016, Fonda admits that she caved and had plastic surgery in the past, something she now regrets. But there’s one very important reason she is exercising some self-facing empathy and isn’t exactly chastising herself for bending to that pressure: we’re all only human.

If I had stopped at any point in my life prior to right now it would have been pathetic because I wasn’t who I could be.

That “knowing” didn’t happen without spending her life in constant revolution, always reinventing and changing and growing. Fonda is not who she was at age 30, when she was getting drunk enough on vodka in order to work up the nerve to shoot the striptease scene that opens Barbarella (though she still drinks vodka — never wine); she’s not who she was when she was 32, barely eating and subsisting on uppers to fuel her through political rallies; she’s not even who she was when she was married to Ted Turner in the late ‘90s, when she became a mountain woman and found herself compromising her own passions for the billionaire. In a world where most people are concerned that their lives have to be set and perfected by a certain age, Fonda is walking proof that the compulsion to figure it all out on a regimented timeline is indeed “poppycock,” as she calls it.

“If I had stopped at any point in my life prior to right now it would have been pathetic because I wasn’t who I could be. I was part of myself, a work in progress and still searching. And I thank God I had the wherewithal to say, ‘This is great but this isn’t really it. There’s more to life than this and I’ve gotta move on,’” she says. “That’s not always easy to do, but I don’t think young people should feel that if they don’t have it together, [that’s it]. Look, we live a whole adult lifetime longer than our parents and grandparents. That means that it’s kind of advantageous to be a late bloomer, so if you haven’t found yourself until you’re 50 or 60 that’s OK too.”

Luckily, it looks like Fonda finally feels like she’s genuinely found herself — not in a sweeping, end-of-a-Hollywood-movie sort of way, but in a grounded, practical, unshakeable way. She spends most of her time working on things she truly cares about (a Netflix film with her longtime friend Robert Redford; using her celebrity to spread awareness of causes like jail reform, protecting women from FGM, and the need for a fair wage for restaurant workers; filming a PSA to convince voters to turn out for the midterms). She co-stars in the revolutionary series Grace & Frankie, alongside her pal Tomlin, doing the work to change the way women of a certain age are perceived. She's planning a sequel to 9-to-5 with Tomlin and Dolly Parton, a contemporary expansion upon the 1980 film she originally produced to raise awareness of the wage gap. And she spends exactly zero time, she says, worrying about what anyone else thinks of her.

More like this
At 28, Rosie Perez Risked Her Career To Stop Playing Stereotypes
By Gabrielle Bondi
Pamela Anderson Is Still A Hopeless Romantic
By Ilana Kaplan
Keyla Monterroso Mejia Is Finally The Star Of The Show
By Gabrielle Bondi
At 28, Debra Jo Rupp Was Living A Much Different '70s Show
By Grace Wehniainen
Get Even More From Bustle — Sign Up For The Newsletter
From hair trends to relationship advice, our daily newsletter has everything you need to sound like a person who’s on TikTok, even if you aren’t.