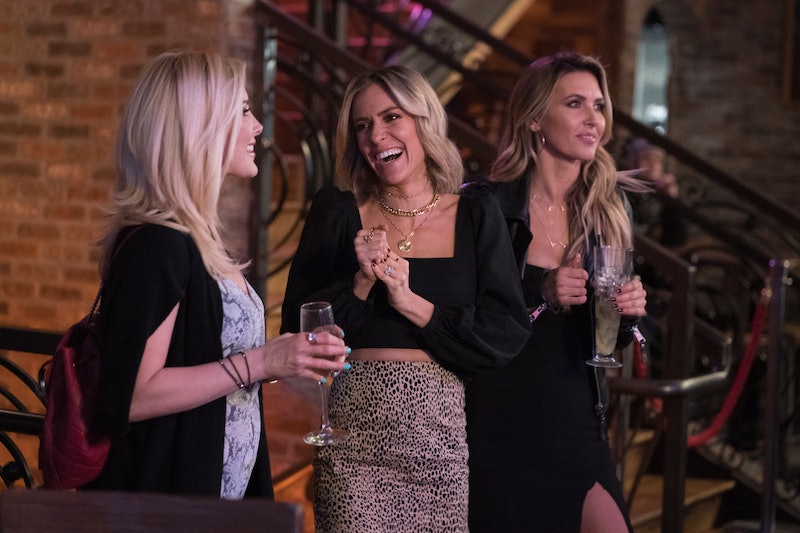 Kristin Cavallari may have moved on from The Hills and gone country, settling down in Nashville with husband Jay Cutler, but that doesn't mean she ignores her friends on the West Coast. Kristin Cavallari had a Hills reunion on Very Cavallari with Heidi Montag and Audrina Patridge, when they visited her in Nashville. And in a new clip from the episode, they reveal a major behind-the-scenes secret that almost changed the course of Hills history.

As the former Hills co-stars sit down for dinner in Nashville in the clip, they start chatting about Kristin's fall-out with former best friend Kelly Henderson, who turned on her during the second season of Very Cavallari. "Cameras and a little bit of fame, it brings people's true colors out," Audrina remarks, before reminding Heidi that she went through something similar with her own former best friend, The Hills' main star Lauren Conrad.

Heidi then drops the bombshell that LC apparently tried to get her kicked off the show for good. "She turned on me. She said, 'Alright, we're not friends. You're off the show'," Montag tells the girls. The reason for this spat? None other than Spencer Pratt, her now-husband. "Oh. She was like, 'Oh, I don't like Spencer. If you keep dating him, you're off the show.' And I said, 'Then I'm off the show.'"

Obviously, things didn't exactly go to LC's plan, considering that Heidi and Spencer ended up outlasting her on her own show after LC famously left The Hills before its final season. Cavallari replaced her, and the bond between her, Heidi, and Audrina remains strong to this day. In fact, if Audrina had it her way, they might just move to Nashville to be with Kristin full-time.

"I love Kristin, we've stayed in touch," Audrina told E! in an interview on Tuesday, Feb. 11. "With us three together, we had the best time. We're like, 'Heidi, let's just move to Nashville and be on her show!'" She and Heidi still have obligations out West, as they're set to start shooting the second season of The Hills: New Beginnings "in a couple weeks." However, Audrina still "hopes" that Kristin will make an appearance on the reboot, so another Hills reunion may very well be on the way.

More like this
How To Stream 'Pretty Wild'
By Arya Roshanian
Tristan Thompson Proposed To Khloé Kardashian & She Said No
By Jake Viswanath
What Is 'Pretty Wild' Star Tess Taylor Up To Now?
By Morgan Leigh Davies
Netflix Reveals First Look At Wednesday In The 'Addams Family' Spinoff Series
By Bustle Editors
Get Even More From Bustle — Sign Up For The Newsletter