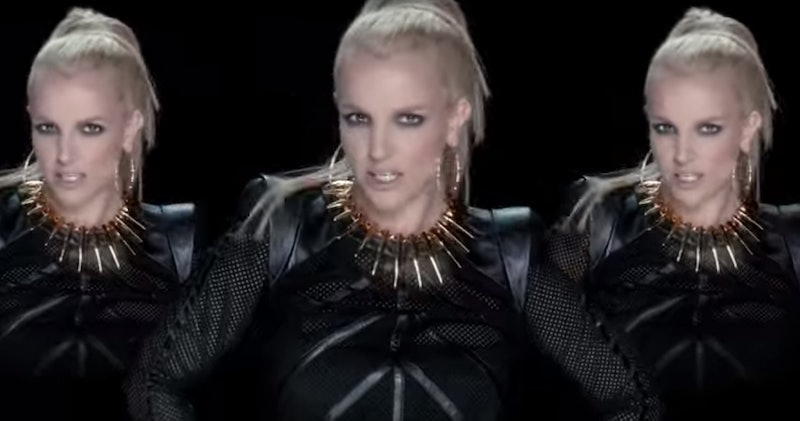 Every great hero deserves an origin story. And the history of "It's Britney, b*tch," is Britney Spears' own indelible cultural turning point, transforming a frenetic, floundering moment in the superstars career to one of strength and empowerment. Entering the consciousness of popular music in 2007, it was the bold, surprising phrase that started "Gimme More" — Spears' comeback single following her public breakdown just eight months earlier. The phrase is Spears' own superhero cape, giving her flight at a time when she looked to be sinking.

Since then, it's remained a cultural point of reference, repeatedly and lovingly recalled in TV shows and sampled in songs. Say it, and you summon the spirit of Britney in '07, rising from the ashes, announcing her rebirth, and reclaiming her autonomy. But it's also a fun shorthand for survival. Of all the battle cries committed throughout history, "it's Britney, b*tch," is by far the silliest, and the most satisfying.

It's a hair-flip of a response aimed squarely at a culture who were happy to consume, pass judgement on, and even laugh, at Spears as she struggled in the midst of a harrowing personal crisis. To repeat the phrase as your own is to throw on Spears' sparkling body armor with wit and cackle belligerently in the face of your own enemies, whatever, or whoever they may be.

In a 2010 interview with MTV, Jim Beanz, who was a producer on "Gimme More," revealed the simple origin of "it's Britney, b*tch," and said:

[Spears] was basically open to any and everything that I mentioned. The phrase came last minute right at the end of the session ... We needed that one catch phrase to really bring her back and put her stamp on the industry and that stamp was 'It's Britney, bitch.'

Off the cuff and piquant, the statement is as boisterous as it is dynamic. Though many of her fans immediately recognized the admonition as a declaration of self-efficacy, critics of the song, and the statement, failed to comprehend it alongside Spears' continuing personal struggles, which included a ferocious custody battle with ex-husband Kevin Federline. Following the release of "Gimme More," for example, Fox News noted that the phrase sounded, "cocky and fun," when it started receiving radio airplay but then trilled, "now that Spears’ entire life has fallen apart, the whole idea may be causing winces instead of knowing clucks."

Meanwhile, a Sound Check review of Blackout, the album from which "Gimme More," was released, suggested that the phrase was simply laughable. Speaking about the line, writer Eric Danton said, "The comedy starts right away, when she plays the role of your drunk friend calling at 3 a.m., slurring, “It’s Britney, b*tch.”" What Danton perhaps failed to realize is that many fans of Spears' would legitimately go on to take great pleasure in reciting, "it's Britney, b*tch," as a playful admission of their own. One that they could make while enjoying their own messy, chaotic moment and refusing to be shamed for such experiences.

Ultimately, the line could elicit a laugh from listeners, but it was never at Spears' expense. Instead, the catchphrase gave a candid reminder that the singer was as human as anyone else and as liable to make mistakes and encounter failure as the rest of us, too. In doing so, Spears rejected the widespread invisibility of celebrity flaws to take ownership of her own foibles with pride. "It's Britney, b*tch," rebranded Spears as a savvy showgirl who was making missteps, but was armed with exactly the right self-awareness and quips to survive them.

Like Spears herself, the phrase has managed to remain as an enduring part of pop culture, and it's to the credit of the singer's legacy. In TV, for instance, one of the most beloved jokes in The Office is still the moment where Michael Scott mistakes Lady Gaga for Spears. In a scene that reflects just how eminent the catchphrase still was in 2010, he stares straight into the camera to say, "it's Britney, b*tch," while "Just Dance," awkwardly blares out of his car radio. The significance? He was making his very own comeback with the "Michael Scott Paper Company," which could be considered to be the character's business equivalent of "Gimme More."

Meanwhile, in the cult Australian satire Kath And Kim, a character screams the catchphrase before starting a bar fight. In doing so, the scene perfectly evoked both the innate humor of the phrase, and also it's gleeful power as a hawkish introductory statement.

In 2012, the phrase was also given a prominent resurgence by being featured in Will.i.am's collaboration with Spears, "Scream & Shout." And the very next year, Jay-Z even sampled the phrase in "BBC," from Magna Carta Holy Grail, which some fans speculated was used as a drug euphemism in the song. However, in 2015, Jay-Z revealed himself as a fan of Spears' when he attended one of the singer's legendary Las Vegas concerts with Beyoncé. So it isn't too far-fetched to assume that J-Hova was simply delivering a straight up tribute to Spears with the reference.

As all of these references prove, "It's Britney, b*tch," is still a cultural asset with plenty of life left in it, and it comes with a certain versatility, too. It works as a fun tribute to the singer, but also as knowing callback to Spears' perseverance through hard times. Crucially, however, the phrase likely remains so ubiquitous as it works as a dynamic declaration for those times when we're pulling ourselves out of our own hardships. Like us, TV characters can reference the phrase in times that they're owning their mistakes, or simply eager to celebrate autonomy over their own lives and bodies. Even when they might not be using that freedom to necessarily make the best decisions they could be.

Surprisingly, though the phrase has continued to hold cultural ubiquity in the ten years since "Gimme More" was released, it would appear that the phrase may not be as memorable to Spears as it is to the rest of the world. In 2016, for instance, Spears revealed that she didn't know where "it's Britney, b*tch," comes from during a radio interview with 99.7 Now. Speaking about where she thought the phrase originated, Spears said, "I really don't remember… I think we were in the studio, and me and [will.i.am] were just playing and it came out."

But Spears really doesn't need to remember such details, because clearly, the rest of us will never allow for the phrase (or it's rich history) to be forgotten any time soon. "It's Britney, b*tch," is more than just a catchphrase at this point. It's become a cultural gesture, a knowing nod between friends, and a camp way of humorously acknowledging our humanity, in all of it's messy, imperfect glory. And, just as Spears did back in '07, it's a cape we can all throw on in order to take flight when we may feel like we're sinking, ourselves.