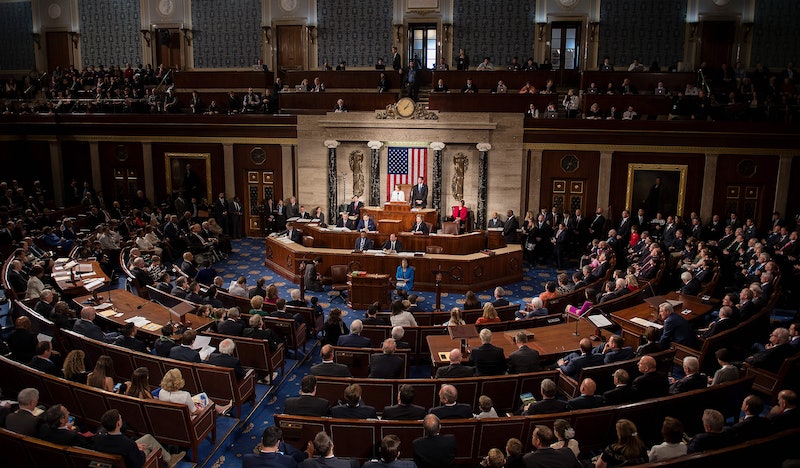 Okay, so this time all the fuss was about nothing — or was it? House Republicans decided not to gut the Office of Congressional Ethics, so everything is right in the world. However, there are two problems with that line of thinking. First of all, the tactic they used to propose stripping the group's power in the beginning was a dangerous one, and they haven't disavowed trying it again. And secondly, President-elect Donald Trump's response to the decision, hailed by many as a principled rejection, was really nothing of the sort.

The move to take power away from the OCE actually has a close parallel in recent political memory: the passing of HB2 in North Carolina. Both happened quickly and behind closed doors, without public debate or even debate from the opposition party in the House. In this case, House Republicans called a meeting when Congress wasn't even in session and effectively voted to release themselves from the scrutiny of the independent body that makes sure that they act ethically.

Basically, they voted to take away the transparency that attempts to stop corruption, and even the vote itself was done with no transparency. So yes, they've now walked back that decision, but it's only one decision, and it's one that created a huge amount of public backlash. Who's to say that they won't use the same sort of tactic again?

Trump's objection, which of course he expressed on Twitter, had nothing to do with the effect of the measure or the way in which they went about it. Instead, to him it was an issue of priorities. Why bother the "Independent Ethics Watchdog" (as he seems to think it's called, given that he capitalized the words in the phrase) when there are "so many other things of far greater importance"? He also laid the groundwork for future criticism of the OCE, calling it "unfair."

With his business ties, Trump's potential to run into corruption scandals is like no other president's before him, so it's not entirely surprising that he wouldn't put his weight behind protecting an ethics watchdog, even if this one deals with Congress instead of the office of the president. But instead of taking his rebuke of House Republicans as some big stand for government ethics, it needs to be seen for what it is: a response in line with the public outcry, putting the president-elect exactly where he wants to be. As he reminds the world with the #DTS at the end of the tweet, he wants to be in line with the people and not Congress. This is the swamp at work, and now he can use House Republicans' latest decision to say that he's hard at work draining it, before he's even become the president.

In the end, it's a good thing that the OCE still exists with its power intact, because it could become very necessary in the coming years — as it already has been in years past. But all in all, the 115th session of Congress has not gotten off to a heartening start.