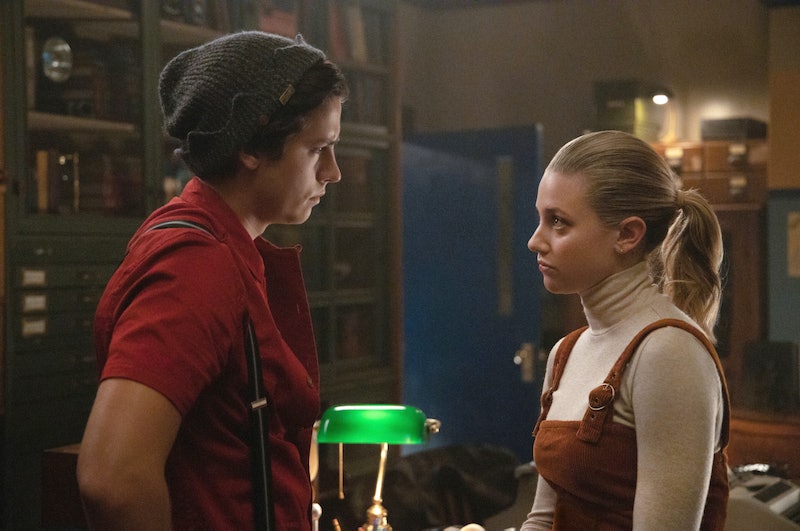 Spoilers ahead for Riverdale Season 4, Episode 13. Unfortunately for fans still holding out hope that Betty didn't kill Jughead on Riverdale, the evidence is really starting to stack up. In fact, the show snuck in a massive clue you probably glossed right over (you know, in addition to all their very heavy-handed clues).

In the Feb. 12 episode, we find out that the Stonewall Prep students are apparently very into the Ides of March: in order to celebrate, they throw a huge toga party in the woods. It may seem like an odd day for a bunch of teens to go all out for, but it's a telling one: the Ides of March is the day that Roman ruler Julias Caesar was stabbed by his own senate members, including his protégé Marcus Brutus, because they felt that he was becoming too powerful.

Fittingly, it would be very Caesar-esque for Jughead to die by the hand of his own girlfriend, which is what the episode clearly wants us to believe. After Donna secretly visited Evelyn Evernever, she learned another secret word Betty had been brainwashed with — not tangerine, but one that makes her go into a full-on fugue state and hurt the ones she loves.

Donna assumedly says this word, and when Archie and Veronica find Betty, she's standing over Jughead's body holding a bloody rock in her hand. Jughead appears to have been hit on the head, and Archie confirms that he has no pulse. The scene (which we've seen before in a flash-forward) is reminiscent of the time Betty's father manipulated her into killing her cat by hitting it with a rock. Perhaps being triggered by Donna's word made Betty think she was reliving (or merely remembering) killing her cat — only this time it was Jughead who paid the price.

It's still possible Betty didn't kill Jughead, though. Just before Betty and Donna's conversation in the woods, Jughead and Bret had gone off to "settle" matters themselves. Jughead had a knife with him, but it's possible that Bret was armed too. Maybe Bret killed Jughead and left him there for Betty to find in her fugue state, leading her to believe she'd murdered her own boyfriend. Bret was literally dressed in a Roman toga for the Ides of March party, so perhaps he's the one who acted as the Brutus to Jughead's Caesar — not Betty.

Riverdale isn't on next week, but when it returns on Feb. 26, it picks up with an episode called "How to Get Away with Murder," which is very well what Bret might have just done.