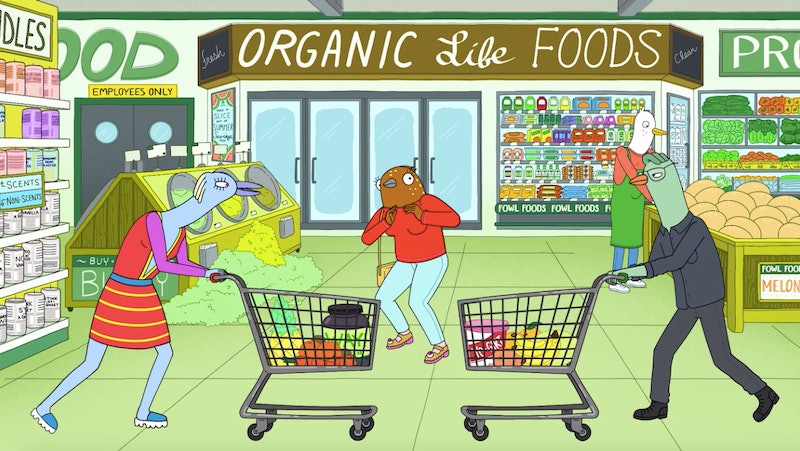 Spoilers ahead for Tuca & Bertie Episode 4, "The Sex Bugs." Much like Abbi and Ilana from Broad City (which is, in many ways, the spiritual predecessor of this show), Tuca and Bertie are total opposites. The former is a confident go-getter who never follows instructions, while her best friend is a chronic-apologizer with General Anxiety Disorder. But they balance each other out, as is evidenced in Tuca & Bertie Episode 4. While they're on a quick errand, the songbird becomes overwhelmed by what she deems a stressful environment, which she can only express through a musical number. Bertie's "I'm Losing My Sh*t" song is a realistic portrayal of someone on the verge of a panic attack and the people around her who just don't get it.

The songbird is having what Tuca calls "A Case Of The Berties." In fact, the timid songbird was supposed to give a work presentation but began spiraling out about what could go wrong, eventually calling in sick to avoid the problem altogether. Speckles immediately knows what's happening, saying that she's having a "pre-panic attack," where she spins out over something small. This, apparently, happens a few times a month.

Tuca, on the other hand, needs sex bug medication and drags her best friend to the grocery store, which proves too overwhelming for the anxious bird to handle. The toucan leaves her best friend unattended in the grocery aisle while she applies the sex bug creams in the bathroom. Bertie proceeds to have a panic attack, which is portrayed through song. While she explains that she's "losing her sh*t for so many reasons," the other shoppers double as a skeptical Greek chorus, returning that she actually has "no reason" to freak out like she is.

When they ask her what exactly she's afraid of, Bertie hesitates, then sings, "Uh, there are too many fears to name / snakes, earthquakes, blood, and hurricanes." To the outside, these worries are entirely irrational, and the songbird becomes frustrated that no one understands her completely valid fear of snakes! "Look at these dang *ssholes making fun of my pain," Bertie sings. "Lady, it's not our fault that you're clearly insane," they return, condescendingly.

A health-crazed flamingo offers that it "sounds like general anxiety," while a hog suggests, "Might want to try drugs or therapy." A goose claims, "Yoga and meditation are key," while the hog's monstrous daughter croons, "Mental health is as important as brushing your teeth!" While this is all great advice, their tones are more patronizing than helpful. Plus, who are they to talk? From the way they're speaking to Bertie, it doesn't sound like they have any first-hand experience, and their advice backfires.

And despite the fact that Bertie in no way wants their advice, the shoppers continue, singing, "She's sick in the head / She should stay in bed or take some kind of meds," causing her to crouch in the fetal position. The worry wart then builds herself a yoga mat fort, hugging her knees in full panic mode.

While it's true that those who suffer from anxiety often need outside observers to give them a reality check, that's what Tuca and Speckles are for. While Bertie's friend probably shouldn't have left her alone while she was on the verge of a panic attack, the toucan was wise enough to know that Bertie needed to get out of her head and out of her apartment. Speckles has another approach, using his invisible "Worry Vacuum" to suck all her anxieties away.

In an interview with the New York Times, series creator Lisa Hanawalt stated that Tuca and Bertie represent the two contradictory sides of herself — one that's excessively confident and the other that can't turn off her brain. And according to the Atlantic, Hanawalt performed "I'm Losing My Sh*t" in front of Netflix executives during her pitch meeting for the episode, which speaks to her investment in both the song and the character who performed it.

In fact, she told the NYT that when she was pitching the show, she was met with some confusion as to why exactly Bertie was so scared all the time. "She's anxious because she has anxiety," Hanawalt recalled saying. Indeed, it's difficult for those who have anxiety to explain why exactly they're afraid, when their worst fears sound so irrational to people around them. Take Bertie's chain of "what ifs" that she spouts off to Speckles at the beginning in Episode 4: "What if a snake crawls in my mouth, lays eggs, and baby snakes slither out of my mouth in the middle of a meeting?"

Just like Bertie, Hanawalt also suffers from anxiety, telling the NYT, "I have friends who aren't as anxious as I am, but something about them makes me want to be a braver, better person. In a way, it's more relaxing to be around someone who's bolder and less afraid." This is certainly true of Bertie, who is buoyed by Tuca's shameless confidence. Even Speckles, while not a cocky-go-getter, is content with his newfound role as the "bad boy of architecture" and tends to take life as it comes.

Furthermore, Hanawalt explained that her therapist had her personify her worries, which she named Kyle. The NYT article went on to describe the sentient anxiety as "a man-spreading bro in Adidas slides who barges into [Hanawalt's] brain. He is an oddly disarming presence: an oblivious doofus who doesn't know any better." As a result, the Tuca & Bertie creator able to dismiss her fears, saying, "Oh, it's just Kyle."

And while her character, Bertie, hasn't named her anxiety just yet, Hanawalt has big plans for her beloved songbird. "I would love for Bertie to go to therapy and further explore her past trauma and her current anxiety and ways of dealing with that," the showrunner told Entertainment Weekly. "I think therapy is great but also very funny, very rich with material."

But for now, luckily Bertie has understanding friends who both comfort her without giving too much credence to her irrational thoughts. And the next time she loses her sh*t, hopefully it won't be in Fowl Foods.

More like this
Mike Flanagan Teases 'The Midnight Club' In This Exclusive, Creepy Clip
By Grace Wehniainen
Caleb McLaughlin Details Racism From 'Stranger Things' Fans
By Radhika Menon
Glenda Cleveland Died 2 Decades After Trying To Turn In Neighbor Jeffery Dahmer
By Brad Witter
What’s New On Netflix: Ana De Armas’ 'Blonde' & A Nick Kroll Special
By Arya Roshanian
Get Even More From Bustle — Sign Up For The Newsletter