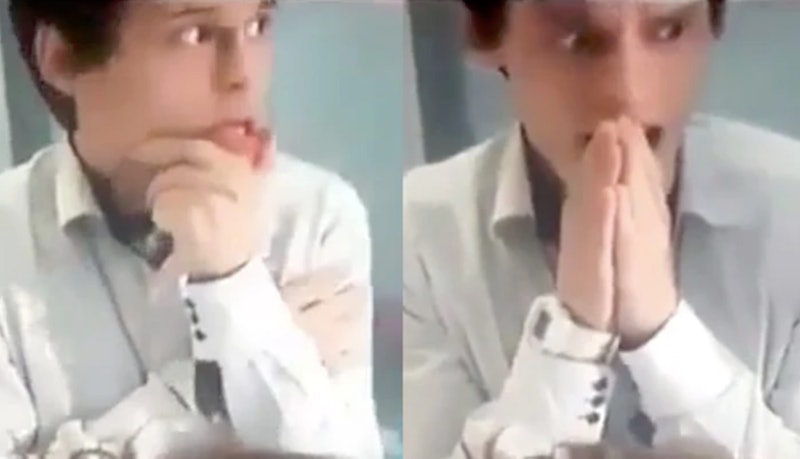 Childbirth is an experience so magnificent we colloquially regard it as a miracle. And with good reason: the strength of a pregnant body is something to behold. But miracles aren’t necessarily cute and clean, y’all, as evidenced by this guy’s reaction to witnessing childbirth. His face is a reminder that labor can be, to put it gently, horrifying AF.

The original video appears to be from the Dutch reality show “Vier Handen Op Eén Buik,” which loosely translates to “Four Hands On A Belly.” This episode showed 17-year-old Quintana giving birth as her boyfriend Dalo watched in what can only be described as complete terror. It was revealed at the end of the episode that Dalo was not the father of the newborn. At the time the episode aired, it was reported that the couple was still together.

The video of Dalo’s reaction was posted on the Facebook page Karma and has since been viewed over 3.7 million times. The comments section is filled with people tagging their partners because Dalo’s face is likely a lot of our faces if we were to ever witness someone else giving birth. The caption to the video roughly translates to, “when you realize that babies aren’t brought by the stork.” Dalo’s face needs no translation.

The shock. The horror. The visible confusion about what is even happening. Around 16 seconds in you can see him reach for his girlfriend’s shoulder in a brief moment of support and comfort. Then, he quickly regresses back to completely losing his chill. Oh, Dalo. You truly had no idea what you were in for, did you?

You don’t have to do more than a quick Google search to find people reacting to childbirth videos with equal horror and awe. A few years ago a radio station in Ireland challenged childless men and women to watch a birth video. Their reactions are what you’d expect: shocked, amazed, kind of grossed out, and only partial reactions as many spend the majority of the video looking away.

All of this isn’t to say that the experience of childbirth feels normal and cool from the viewpoint of the mother. In 2015, Bustle spoke to 25 women about what labor actually feels like, because childbirth is truly nothing like the movies. Experienced ranged from “It feels like your core muscles are ripping apart your abdomen” to “The worst diarrhea of your life” to “You are ravenous when you finish, but instead of an ugly t-shirt, you get your own baby.” Basically, we are all some variation of this guy at some point during childbirth.

Regardless of whether you want children, have children, or plan on witnessing a birth anytime soon, we can likely all relate on some level to Dalo's reaction. At the very least, we can all hope he was a little less horrified when he, you know, actually held the baby.

More like this
Why TikTok Is Obsessed With Caesar Salads Right Now
By Alexis Morillo
Behind The Hilarity Of The "POV: You Walk Into My Room" TikTok Trend
By Lexi Inks
Why TikTok Is Flooded With Controversial Videos About "Pick Me Girls"
By Courtney Young
This TikTok Song About An Unrequited Romance Has FYPs In Shambles
By Emma Carey
Get Even More From Bustle — Sign Up For The Newsletter