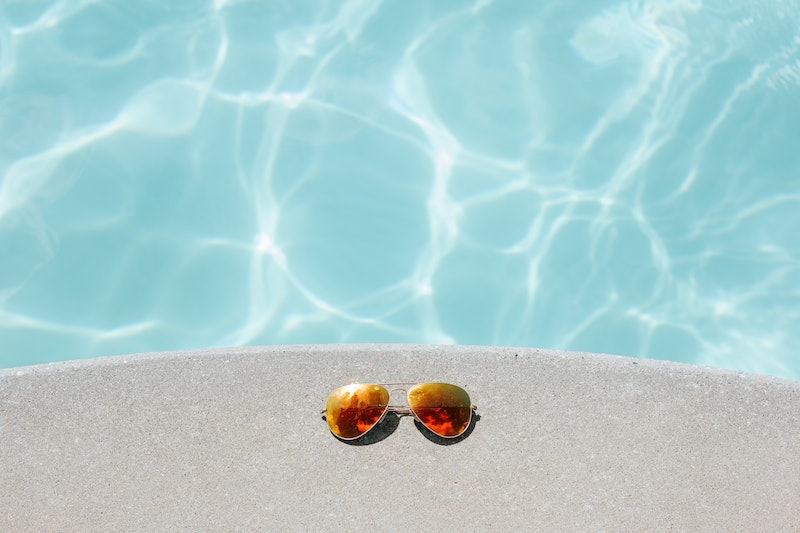 There comes a point in every period-haver's life when they realize that certain menstrual products are just not meant for the pool — until now. On Monday night, the Internet was all aflutter over a maxi pad-shaped pool float that allows riders to catch both chlorinated and crimson waves. I would say that floating around in a bikini on a giant menstrual pad is a dream come true, but it's really more like a nightmare I would have had in middle school.

The float was initially posted on Imgur on Saturday, but it went viral a few days later when Twitter user Jillian David pointed out its uncanny resemblance to the contents of the zippered pocket in your purse. In fact, the comparison is so obvious that I was legitimately shocked to realize that the float's familiar shape may not have been intentional. "Focus group," David tweeted. "This could have been avoided with 1 focus group (of women)."

Because this is the kind of unintentional hilarity the Internet thrives on, the tweet quickly shot to fame. On Tuesday morning, David's post had 76,000 likes on Twitter and 2,000 comments poking fun at what is, again, basically a panty liner for giants. I suppose mythical creatures have menstrual needs, too, although they may want to double up on protection — despite its shape, the float doesn't appear to be made of particularly absorbent material.

See what I mean? Whether or not you get a period, you would have to be willfully blind to miss the fact that there is a massive maxi pad pictured above. Needless to say, Twitter had a field day roasting the float's very existence.

Some users pointed out that the pool float's shape speaks to the power of menstrual stigma. Surely, someone had to notice what they were developing, but either they were too embarrassed to speak up, or they were ignored. (Then again, maybe the company is just trolling us all.)

If you have $80 to drop on an unintentionally hilarious pool floatie, you might as well lean into the theme: Grab some wine, a magazine, and a box of pizza, and let the summer sun act as your heating pad. For the finishing touch, don't forget to wear your red bikini.