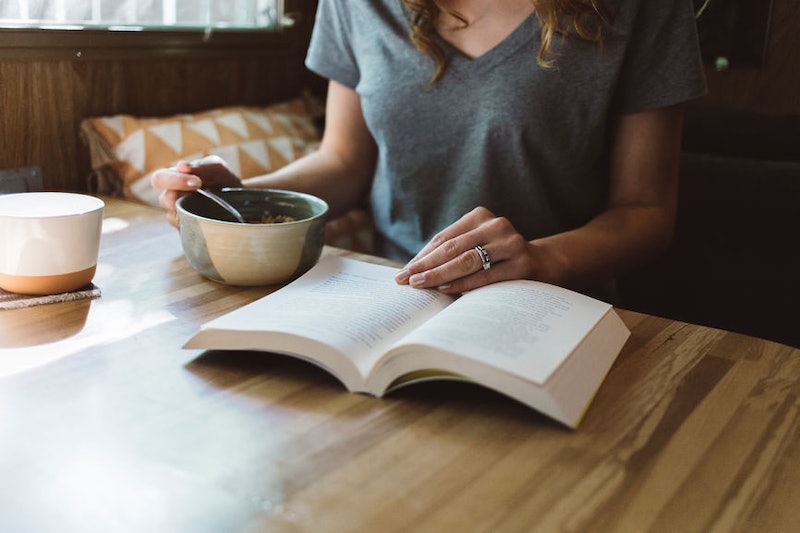 So you’ve decided to give up dieting in 2019: Congratulations! Amid all the talk of cleanses, detoxes, “fresh starts,” and 30-day shreds ushered in at the start of each new calendar year, any resolution to stop treating your body like it’s a problem that needs to be fixed is a downright radical choice. The journey to healing your relationship with your body is an exciting, though scary process. Where the heck do you even begin? Enter Intuitive Eating, a book originally published in 1995 by Evelyn Tribole (MS, RDN, CEDRD-S) and Elyse Resch (MS, RDN, CEDRD) that outlines a mindful approach to eating and making peace with food for recovering chronic dieters.

This is a book that proposes to have the answers you’ve been searching for — a step-by-step guide comprised of 10 core principles for learning how to honor your hunger, respect your fullness, and get back to a place of innate wisdom around your body’s ability to self-regulate its needs. “Only when you vow to discard dieting and replace it with a commitment to Intuitive Eating will you be released from the prison of yo-yo weight fluctuations and food obsessions,” the book states. “Intuitive Eating will not only change your relationship with food; it may change your life.”

This all sounds wonderful — miraculous even — but is Intuitive Eating accessible to all? Are its principles universally applicable and relevant across cultures, races, religious practices, body sizes, and levels of physical ability? Maybe Intuitive Eating really does work, but who is it designed to work for? These questions seem pressing (if not troubling). While undeniable value exists in the book as an alternative approach to recovering from disordered eating behaviors, there are certain elements to the text — both in how it reads and how it’s used — that may make exploring some of the perceptions around its flaws worthwhile.

For writer and speaker Melissa Toler, there are intersectional realities that make the experience of Intuitive Eating more complicated for some. "There is a conversation that needs to be had around privilege and Intuitive Eating," says Toler, who suggests that applying a social justice lens to the way we read the book is crucial. "The solutions are offered from the perspective of very privileged people. Even from just a cultural standpoint, this is written from an American — a white specifically — American perspective. Which unfortunately is thought to be universal, but it’s not.”

"The solutions are offered from the perspective of very privileged people."

Toler’s point invites an interesting question around whether Intuitive Eating adequately addresses the socio-political complexities around the cultures of what and how we eat. From a socio-economic perspective alone, there’s a case to be made that the practice hinges on being middle or upper-middle class by assuming that readers have the means to eat consistently, “explore” new foods, and afford multiple meals a day. “The first thing that comes to mind is for people who live in lower-income households,” says Katie Nunziato, a case manager at the nonprofit Community Access. “Because when you’re living with food insecurity, how can I tell you that you can eat whatever you want if you can’t even afford to eat whatever you want?”

Intuitive Eating presents undeniable complications for those living in poverty. “If we consider Intuitive Eating the definition of listening to your body’s hunger and fullness cues and feeling at peace with food — if we’re looking at just that point of view — then I think poverty and its financial consequences and decreased access to food is going to be something that’s going to be a block,” says Julie Duffy Dillon, registered dietitian and host of the Love Food podcast. “And honestly — Intuitive Eating, that’s not the big deal at that point. The most health promoting thing to do is increase access to food.” For people whose freedom of choice is restricted for reasons bigger than dieting alone, telling people to honor their hunger and follow their cravings seems like an impractical (if not inappropriate) solution.

Within the disability community, similar roadblocks exist. Imogen Fox, a disability rights activist who runs the radical body politics Instagram @the_feeding_of_the_fox, explains how disabled people with health conditions requiring medical supervision might have little ability to manage their food intake at all. “For disabled people, I’m just like well we’re triply f*cked,” Fox tells Bustle. “Your options are so drastically reduced in so many ways. So okay, who is supporting you at the supermarket? Because carrying bags is heavy… then you’ve got the medics to worry about, who’s judging your food intake, who’s talking to you about diet culture, who’s weighing you, measuring you, telling you what your BMI is, shaming you. ‘We won’t do this surgery until you’ve lost five stone’ — like that’s a thing.”

Then there’s the experience of those navigating Intuitive Eating while living in larger bodies. “If you’re fat, people are telling you not to eat or telling you that you shouldn’t be going back for seconds or commenting that your body is disgusting,” says Nia Marie, an Instagram blogger who runs the eating disorder recovery account @thefriendineverwanted. “Thin people don’t have to go through that. There’s no one who’s like, ‘Yeah thin people shouldn’t eat.’ Thin people are totally allowed to eat. They’re allowed to overeat and eat whatever the hell they want and eat unhealthy food and still be praised because they are thin.”

Given the way cultural stigma around weight creates this double standard, the process of making peace with food and getting to a place of body acceptance is significantly more difficult for those who don’t benefit from thin privilege. “Intuitive Eating IS EASIER emotionally for naturally smaller people, because they do not have to go up against cultural body ideals the same way,” says Caroline Dooner author of The F*ck It Diet, coming out March 26. “We all have to re-examine the way we relate to our bodies, but people who are naturally thin or even medium-sized — people with thin privilege — don't have to deal with weight stigma the same way.”

All of these nuances considered, finding a way to improve the way we talk about Intuitive Eating and make the practice more inclusive is becoming a priority amongst some practitioners. For Julie Duffy Dillon, the answer resides in approaching the book with a critical mindset. “As I’ve kind of been teasing apart my own methods with people and this process, something I’ve been thinking about is what as a clinician I need to do to help people to continue to feel in their body in a world that is continuously traumatizing them," she says. So much of Intuitive Eating is about body neutrality and self-acceptance, and, as Dillon points out, not everyone has the privilege of being able to practice these concepts peacefully in a world that stigmatizes populations in a constant struggle for recognition. “For some people, it’s also if they have permission to live in the body they’re in right now,” says Dillon, “And not everyone has that culturally. Not everyone’s going to have that.”

That said, encouraging greater flexibility around individual interpretations of the book’s content may help wider demographics of people explore what approach to food and eating works best for them. “It’s very much like take what works, leave what doesn’t,” says Paige Smathers, registered dietitian at Positive Nutrition. “You’re not trying to ‘become an Intuitive Eater.’ You’re trying to use that to figure out how you want to feed yourself.” With a looser definition in place — one that focuses less on pushing people to identify as an “Intuitive Eater” and more on empowering people to figure out how best to care for themselves with the resources they’re equipped with — readers may be able to find deeper resonance with the book.

“You’re not trying to ‘become an Intuitive Eater.’ You’re trying to use that to figure out how you want to feed yourself.”

Still, if the problem with Intuitive Eating resides in its exclusivities, coming up with ways to accommodate space for people within a flawed system seems less meaningful than thinking through a revised alternative that prioritizes a variation of human experiences from the fore. Until the book caters its approach to more social, cultural, and political realities, readers shouldn’t pressure themselves to connect with the material. “The authors of Intuitive Eating don’t know more about your body than you do,” says Megan Kacmarcik, registered dietitian and nutrition therapist at New Moon Nutrition. “I think that what they have to say is very valuable. But if things don’t sit right with you [...] you don’t have to justify it to anyone.”

Perhaps the biggest takeaway then is not that Intuitive Eating should be disqualified as a method for healing, but that the book cannot be expected to deliver a one-sized-fits-all solution. To the extent that readers can use the book as an educational framework on the biological and psychological effects of dieting — while keeping in mind that more stories, more nuance, and more appreciation of intersectional identities are needed — Intuitive Eating sits within what is hopefully a growing library of books that are changing perceptions of food and bodies. “If a person looks at those ten principles or anything on Intuitive Eating and just aren’t connecting with it,” says Julie Duffy Dillon. "Then again it’s something wrong with the tool — not them.”