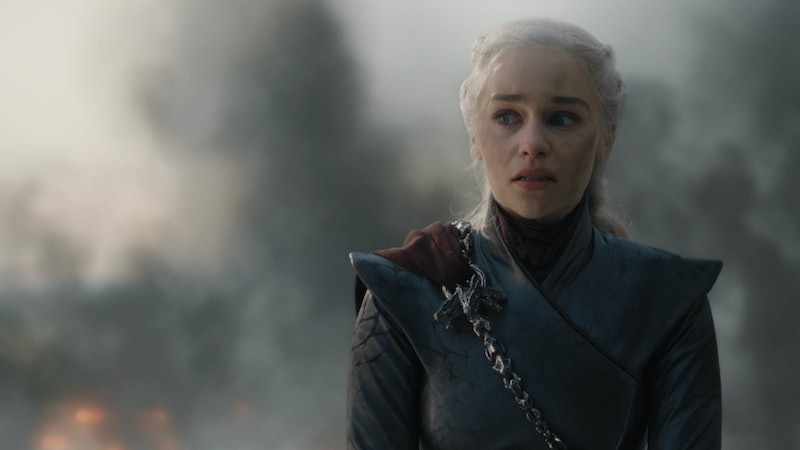 Quite literally, the events of the series began as a fight over the Iron Throne, with Robert Baratheon rebelling against the "Mad King" Aerys Targaryen and taking control of Westeros. From there, the entire show has followed Dany (Emilia Clarke) on her journey to recapture the Iron Throne for the House Targaryen, while over in King's Landing, Cersei (Lena Headey) and Tywin Lannister (Charles Dance) fought to keep the Lannisters on the Throne. After years of battles, bloodshed and heartbreak, Dany finally had the Iron Throne within her grasp in the series finale, only to be murdered by Jon (Kit Harington) in order to protect the people of Westeros from her tyrannical rule.

In the wake of Dany's death, Drogon melted the Iron Throne down to a puddle of lava, symbolically marking the end of an era, and taking away the main focus of everyone's quest for power in the Seven Kingdoms. In addition, it feels like another way for Jon to highlight the fact that he promised Dany that she would always be his queen, no matter what. By melting down the Iron Throne, Drogon ensured that nobody will ever be able to replace her on the throne, or in his heart. Jon later underlined the idea of her always being his queen by abandoning his post at the Night's Watch to join Tormund and the Free People beyond the Wall, thus making sure he's not ruled by anyone in Westeros.

In addition to making sure that nobody will sit on the Iron Throne after Dany — who, in keeping with her vision in Season 2, never actually got to sit on the Throne before her death — the destruction of the Iron Throne also marks the end of the traditional way that the rulers of Westeros were decided. In the world of Game of Thrones, kings and queen were previously determined either by rebellion (which involved usurping and killing the current ruler) or by the line of succession.

Instead, after Dany's death, Tyrion (Peter Dinklage) suggested that any future leaders of Westeros are instead decided by the lords and ladies who make up the Great Houses of the Six Kingdoms, since Bran (Isaac Hempstead-Wright), who was named king, is unable to have children. The era of Westeros ruled by bloodshed and destruction is officially over, and a new time has dawned for the Six Kingdoms. That becomes even more symbolic when you consider the fact that the Iron Throne was created from the swords of Aegon Targaryen's enemies — it's the end of the Targaryen rule, the bloody fight for power, and quite literally, the Game of Thrones.

For the past 8 years, there has been a popular fan theory that the Iron Throne is cursed, because of its bloody origins, and thus, the lust for power that it inspires caused people to go crazy. While that wasn't the case for Dany, her quest to acquire the Iron Throne at all costs certainly contributed to her transformation into the "Mad Queen." Destroying the Iron Throne could help protect Westeros from another years-long war in the future, now that the object that seems to symbolize both power and bloodshed is gone for good.

Even if the destruction of the Iron Throne is mostly symbolic, it does seem to be a fitting way to wrap up Game of Thrones. After all, with no (literal) throne left to fight for, maybe the era of King Bran the Broken will be a bit more peaceful.