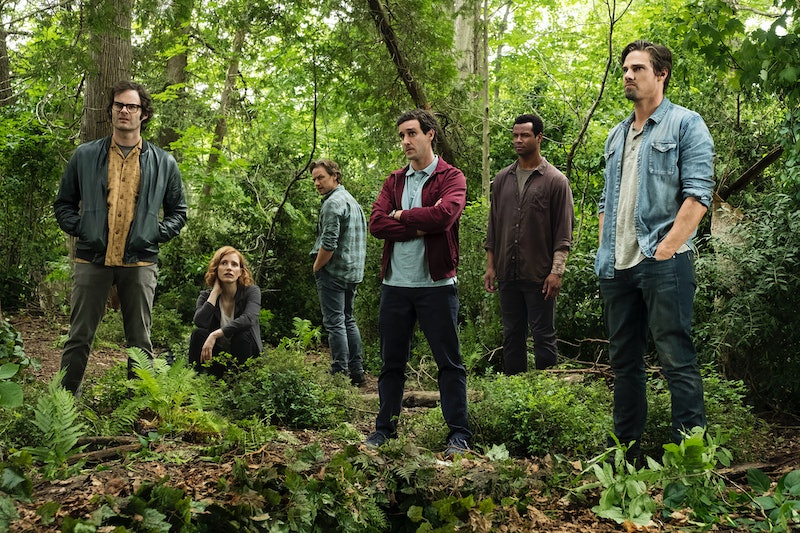 It's once again time to float. From the looks of the official It: Chapter Two trailer, Pennywise is back and he's still up to his old tricks. The demented clown, played by the somehow even scarier Bill Skarsgård, still has his paper boats, red balloons, and that alarming cackle. Unfortunately, for the now grown-up Losers Club, he's also found some new ways to terrify them that will be nightmare fuel long after the movie hits theaters on September 6.

In the first shot of the trailer for the It sequel, an all grown-up Beverly Marsh, played by Jessica Chastain, is back in town. Specifically, she's back at her old house where she meets a kind old woman that seems a tad bit off. First, there's the dead stare that will send chills down her spine. Then there's the old lady's constant scratching and off-handed comments like, "But you know what they say about Derry? No one who dies here ever really dies." Um, OK.

And as if you needed another sign that Beverly was in danger there's the reveal that the old lady has a deeper connection to Pennywise: that circus clown is her father and she's "always been daddy's little girl." So, yeah, all these years later Derry still as scary as ever.

The first trailer for the It sequel also gives a closer look at the now adult Losers Club reunion. The club now includes James McAvoy as Bill, Bill Hader as Richie, Isaiah Mustafa as Mike, Jay Ryan as Ben, James Ransone as Eddie, and Andy Bean as Stanley. And as McAvoy's Bill says, they're going to have to stay together if they're going to beat this clown.

But, it's this older Pennywise that you'll want to keep an eye on. Skarsgård told Entertainment Weekly in a new interview that while Pennywise may look the same in It 2 — yes, he's still rocking that garish makeup — he's actually a whole lot different. According to the actor, Pennywise is even more bloodthirsty in the sequel, which is definitely not what you want to hear.

What's stemming this extra anger? Well, Pennywise finally felt fear for the first time in the last movie and now, he can't go back. “He’s inflicted fear on his prey, and he’s very focused on fear, but he’s never experienced it himself,” Skarsgård said. “Now he’s experienced something that he has been inflicting on others and … there’s a shift leading into the second movie.”

According to Skarsgård his fear "fuels hatred and anger towards the kids, who will be adults in this one, so I think there might be an even more vicious Pennywise. He’s really going after it.”

This newly inspired Pennywise is now ramping up his game and finding new ways to scare the life out of the Losers Club. No surprise, it's through his shapeshifting. So get ready to see Pennywise transform into way scarier things than an old lady. And fans should also be prepared to watch It: Chapter Two through their fingers.

More like this
These 25 International Horror Movies On Netflix Prove Fear Is A Universal Language
By Bustle Editors
The 'Bachelor In Paradise' Schedule Shifts To 4 Hours Every Week After The Season 8 Premiere
By Brad Witter
Nicola Coughlan Shared A Lady Whistledown Excerpt From ‘Bridgerton’ Season 3
By Grace Wehniainen, Alyssa Lapid and Sam Ramsden
The 'Andor' Timeline, Explained
By Gretchen Smail
Get Even More From Bustle — Sign Up For The Newsletter