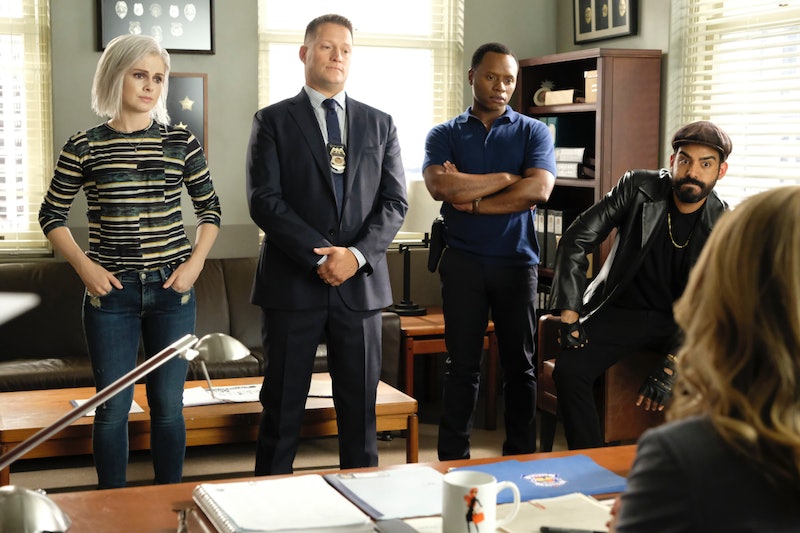 Deciding on an ending for a long-running, beloved TV series is no easy task. You simply can't please every single fan, and even some of the most revered series finales have been divisive (The Sopranos, anyone?). But when it comes to iZombie's series finale, the stars are confident that showrunner Rob Thomas won't leave fans unsatisfied.

Sitting on iZombie's Vancouver set with Bustle and a small group of journalists last winter, stars Rose McIver, Robert Buckley, Rahul Kohli, and Aly Michalka expressed confidence that the series would end in a way that is true to the tone of the first four seasons.

"I spoke to Rob a few weeks ago; I just was curious where we were headed," Kohli says. "And I know tonally what we want to do. I know what they feel this show and the fans deserve and what note they want to leave it on."

"It's not going to be a Sopranos ending," Michalka adds, referencing the notorious final cut to black of that iconic series finale in 2007, which drew ire from some fans for its ambiguity. Kohli, however, says he wishes iZombie would end on a similar note. Judging from how he speaks about it, it's clear that's not the direction the show is headed.

"I think three times in the hiatus I had reached out to Rob and asked him to kill Ravi," he says seriously. Michalka laughs and promises that the showrunner would "never do that." But Kohli doubles down on his desire for a melancholy, divisive ending.

"Honestly, I really wanted it because I know the fans think of him as a puppy, and I really wanted to punch the fans in the stomach," he says. "I know it's sadistic, but that's what I love in Game of Thrones. It's Shakespearian. I thought if you really want to hurt them, let's just kill Ravi in the most awful way. I'm dead serious. I just wanted it to be real nasty."

But Kohli is alone in that regard, and it sounds like that's not what happens. Michalka just wants "some form of a happy ending." And McIver smiles as she reveals she's still in denial that iZombie is ending altogether. "I haven’t found myself with time or brain capacity to think too far ahead," she says with a laugh. "And also I don’t want to spoil it yet. There’s already going to be a bit of separation anxiety, so, I’m like, 'Let me just pretend it’s not ending for a minute longer.' I’m still ambitious that we are going to get some spinoff movie at some point."

One bucket list item that the stars can agree on is wanting iZombie's ultimate villain Blaine (David Anders) see some kind of justice by the time Season 5 ends. "It would be great to see some revenge in terms of Blaine," Michalka says.

"He's gotten away with being a big bad for five years!" Kohli adds. "I'd love to see Ravi punch him in the face once. Honestly, I would love Ravi to go English on him. Just one head-butt."

And while Buckley jokes that McIver went "full diva" while filming the last season — "Rose reminds us weekly that she’s like, 'As soon as they call cut on that last scene, you don’t know me, I don’t know you,'" he deadpans — it turns out that Liv and Major are actually doing pretty well onscreen after last season's turmoil.

"We’ve been saying that we would love Liv and Major to work out, but we certainly need them to get a good couple’s therapist," McIver says of if they'll end up together by the end of Season 5. "They have really had a journey. We’re also thinking it would have been a good opportunity for Ravi to eat the brain of a therapist and treat them. That will be the spinoff. I don’t know, we’ll work on it."

As for whether or not McIver and Buckley want to see their onscreen alter egos fall back in love by the time the series finale ends, their answers are a bit more complicated.

"I think if it’s going to be a healthy, good relationship, I do," McIver says. "But I don’t think that you can pretend that the last few years haven’t happened and just mask over it. They have to have a common goal and to want the same things. I think they love each other very much and would be a great couple. But it’s a big world with a lot going on. It would have to be for the benefit for them both."

And Buckley jokes again, "I think it's contingent upon Liv acknowledging what a jerk she’s been. Maybe if there was a sincere apology."

As for the other major relationship of the series, Peyton and Ravi ended Season 4 finally back together and on a really great note. According to Michalka, fans can expect that to last throughout the entire final season of iZombie.

"Honestly if they pulled out the rug from underneath us in Season 5, I think the two of us would just boycott the show," Michalka says as Kohli nods. "The back and forth that we've had is insane, so it's good that we've read up to Episode 10, and we're still going strong. I think that will ride out to the end. It should be that way."

At least that's one happy ending fans can count on for iZombie's final season. Here's hoping for even more.

More like this
Nicola Coughlan Shared A Lady Whistledown Excerpt From ‘Bridgerton’ Season 3
By Grace Wehniainen, Alyssa Lapid and Sam Ramsden
Ruth Wilson’s New Thriller Spotlights A Controversial Irish Institution
By Darshita Goyal
Stanley Tucci Is Next Level In The BBC's 'Inside Man' Trailer
By Sam Ramsden and Sophie McEvoy
How A Location Blunder Changed The Outcome Of 'The Capture' S2.
By Darshita Goyal
Get Even More From Bustle — Sign Up For The Newsletter