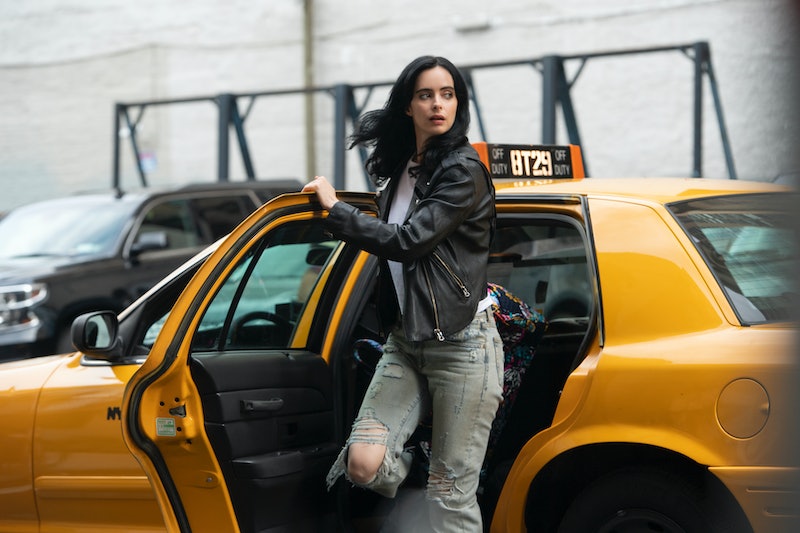 Jessica Jones has faced many enemies over the years, but in the final season of the Netflix series, it won't just be her life that's on the line — it'll be her reputation as well. The Jessica Jones Season 3 premiere date was confirmed in a new teaser that also introduced a new villain. And, from the look of things, this vigilante's private investigation days may soon be behind her, thanks to a new foe lurking in the shadows and labeling her as a "fraud."

Who is this person and why are they coming after Jessica now? Netflix is keeping details about the final season pretty close to the vest these days; however, the official description, obtained by Bustle in a press release, could help fans gain a little insight into what to expect and reads as follows:

"When Jessica (Krysten Ritter) crosses paths with a highly intelligent psychopath, she and Trish (Rachael Taylor) must repair their fractured relationship and team up to take him down. But a devastating loss reveals their conflicting ideas of heroism and sets them on a collision course that will forever change them both."

Sounds pretty ominous, though, whenever you string the words "intelligent psychopath" together it never leads to anything good. So if this really is the show's final season — which is set to premiere all 13 episodes on June 14 — it's certainly going to go out with a bang.

The news that the third season of Jessica Jones would be its last was initially announced back in February, following the cancelations of all the other Marvel TV shows provided on the streaming platforming, including Daredevil, Iron Fist, and Luke Cage. “We have decided that the upcoming third season will also be the final season for Marvel’s Jessica Jones,” Netflix said in a statement obtained by Deadline at the time, adding:

“We are grateful to showrunner Melissa Rosenberg, star Krysten Ritter and the entire cast and crew, for three incredible seasons of this groundbreaking series, which was recognized by the Peabody Awards among many others. We are grateful to Marvel for five years of our fruitful partnership and thank the passionate fans who have followed these series from the beginning.”

Thankfully, it seems the series isn't holding back any punches and plans to deliver one more epic Jessica Jones adventure before closing the book on this phenomenal character. The last we saw of our beloved heroine, she was recovering from the shock of discovering her mother was still alive only to lose her again shortly thereafter. However, the biggest emotional blow to her life was arguably the fallout she had with her best friend Trish, and while the two will be forced to work together to fight off this new enemy (whoever he may be), they still have a long way to go before their friendship could ever return to the way it once was.

The teaser may not show a ton of footage from the season, but it does feature the new mystery foe (above) and finds Jessica looking more worried than fans have ever seen her before. (Even her official Twitter account has turned on her because of this dude.) So if there was ever a time to be concerned for our favorite PI, now would be the time.

More like this
Nicola Coughlan Shared A Lady Whistledown Excerpt From ‘Bridgerton’ Season 3
By Grace Wehniainen, Alyssa Lapid and Sam Ramsden
The 'Andor' Timeline, Explained
By Gretchen Smail
Alicent's Green Dress In 'House Of The Dragon' May Be An Act Of War
By Kadin Burnett
Watch The Thrilling Teaser Trailer Of 'Shadow And Bone' Season 2
By Gretchen Smail, Jack Irvin and Sophie McEvoy
Get Even More From Bustle — Sign Up For The Newsletter