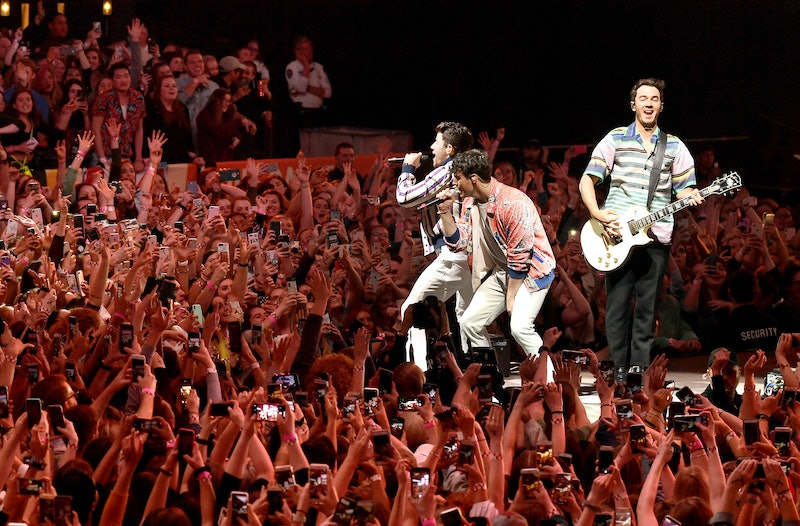 After a long six-year hiatus, the Jonas Brothers are officially back. Not only have they released two singles within the span of a month, but now they've reunited onstage, too. And the Jonas Brothers' 2019 Billboard Music Awards performance was the perfect mix of nostalgia and new beginnings.

During the Wednesday night show, they performed their new single, "Sucker," but not before giving the crowd a taste of the things they've each done during the JoBros hiatus. Nick and Joe teamed up to take on Nick's single "Jealous" before rolling into Joe's band DNCE's "Cake By The Ocean." Then, Kevin joined his brothers and let loose in a fiery guitar moment, and finally, it was time for "Sucker."

You might say that this was a fire comeback. Get it? Flames shot up around the brothers throughout the entire performance, and it was clear that everyone in the audience was loving it. Nostalgia mixed with solid new tunes — you really can't go wrong!

Since the Jonas Brothers broke up in 2013, it's been a long road to their reunion. Wednesday night's performance marked their first televised performance together in more than a decade, according to Billboard, but they didn't waver from any possible nerves. Instead, the brothers were true pros, delivering the quality performance longtime fans have come to expect. As you might imagine, those who have longingly and (im)patiently waited for the JoBros resurgence were flooding social media with excitement.

The brothers are all in very different places in life than they were when they first skyrocketed to fame as teenagers. For one, they're all in long-term relationships: Nick and Priyanka Chopra recently tied the knot, Joe is in the midst of planning his wedding with Game of Thrones star Sophie Turner, and Kevin has been going strong with his wife Danielle for more than nine years. They're also a few years older — and maybe wiser.

Perhaps they needed those years working solo to figure out who they all were as artists and as people. But as Nick told The Elvis Duran Show, they still felt connected as musicians after all that time, and there were were a lot of reasons why they got the band back together. They first started talking about it when they began working on a documentary about their early years as a group.

"We wanted to tell our story, where we came from, what happened on our journey back then together," he said. "In that, I think we started spending a lot of time together. We realized that there was a magic when we were together that we missed... I sort of started the conversation of doing this again. After a few conversations, they came around to it."

If the Jonas Brothers' BBMas performance is any indication, they're ready to keep churning out hits for a fanbase that is still as dedicated as ever. Who knows — maybe next year they'll be back at the same ceremony with a few new nominations under their belt.

More like this
Twitter Is Freaking Out Over Rihanna’s 2023 Super Bowl Halftime Show Announcement
By Stephanie Topacio Long
Everything To Know About Taylor Swift’s 10th Studio Album, 'Midnights'
By Grace Wehniainen and Jake Viswanath
Is Dua Lipa Dating Trevor Noah? New Photos Show Them Kissing & Hugging
By Brian Anthony Hernandez and Martha Sorren
Jason Derulo Is Launching A New Singing Show In The UK
By Maxine Harrison
Get Even More From Bustle — Sign Up For The Newsletter