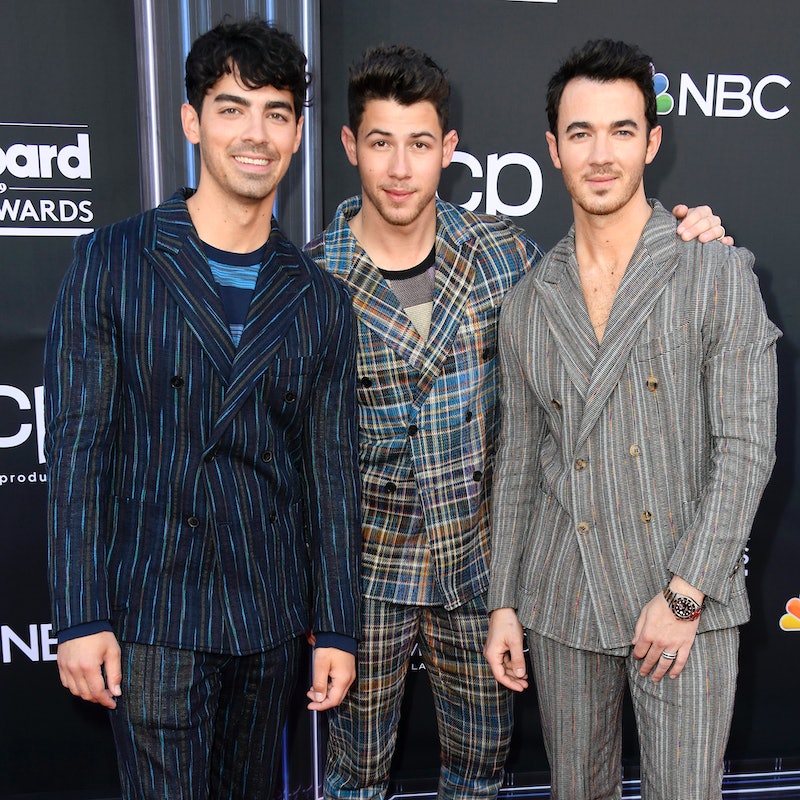 The song "Sucker" may be about their wives, but everyone knows that the Jonas Brothers are also suckers for a good corny joke. So naturally, the Jonas Brothers celebrated Star Wars Day by photoshopping themselves into a Star Wars movie poster, and fans went crazy for it.

The image — an altered version of the 1983 Episode VI: Return of the Jedi poster — was posted by the band's official Twitter page. Nick's face was photoshopped onto Luke Skywalker's, Kevin became Han Solo, and Joe's face was edited onto Princess Leia's. And instead of reading Star Wars: Return of the Jedi, the poster reads "Sucker: Return of the Jonai." Below the title, the parody continues with: "Jonas Brothers presents a six years in the making production in association with DNCE and Nick Jonas Solo efforts." The tweet amassed over 4,300 retweets and 25,000 likes in one day.

Many of the replies included appreciation for the band's unabashed nerdiness. One fan, @andrewsfancyhuh on Twitter, said it should be the promo art for their upcoming tour. "Star Wars VI: Happiness Begins," the user wrote.

The past few months have been full of exciting releases for the brothers, including the release of two singles, "Sucker" and "Cool," the announcement of their upcoming album, Happiness Begins, and the accompanying North American tour. Tickets for the 40-stop trip go on sale on May 7 and the album is set to release on June 7, according to Rolling Stone. The tour will open at American Airlines Arena in Miami, Florida on August 7.

While most fans replied in adoration of the funny Star Wars post, some shared criticism. "Where’s the 4th???????," @barbieSrdz on Twitter wrote, tagging their youngest brother Frankie Jonas. Another user, @kalianefayepoet, had the same question. "Honestly the blatant disrespect of not adding Frankie, the fourth brother, to this meme," the user wrote. "Astounding."

Apparently, Frankie wasn't the only one missing from the pic. Another account, @WhereisBigRob, which is dedicated to rediscovering the Jonas bodyguard and "Burnin' Up" rapper, noticed that Lando Calrissian's character hadn't been photoshopped even though that would have been the perfect spot for a Robert Feggans cameo. The user shared an updated photo that included him.

If fans are correct in their speculations, Joe may have been the one to create the Star Wars Day masterpiece. There were multiple replies insisting that the edited masterpiece was the work of the middle brother. Twitter user @mxchbetter wrote, "this has joe written all over it." Another user agreed. "This tweet is 100% by Joe. Hi Joe!" @colorautunno on Twitter wrote.

It would make sense that Joe was the mastermind behind it, considering he's definitely the jokester of the band. Take the video of him pretend flirting with a picture of his now wife, Sophie Turner, for example. Ironically enough, he posted it the day the two got surprised hitched in Las Vegas after the band performed at the Billboard Music Awards. "You heard of the Jonas Brothers?" he asks the picture. "No? OK."

No matter who actually created the brilliant image, it definitely got fans that much more excited for what else the JoBros have in store. They truly are a force, and it has only just begun.

More like this
Everything You Need To Know About ‘Black Panther: Wakanda Forever’
By Bustle Editors
Lin-Manuel Miranda & Tituss Burgess React To 'Little Mermaid' Casting Backlash
By Radhika Menon
UK Viewers Will Have To Wait For The Terrifying 'Hellraiser' Reboot
By El Hunt
Margot Robbie Breaks Her Silence On *That* Viral 'Barbie' Moment
By Maxine Harrison
Get Even More From Bustle — Sign Up For The Newsletter