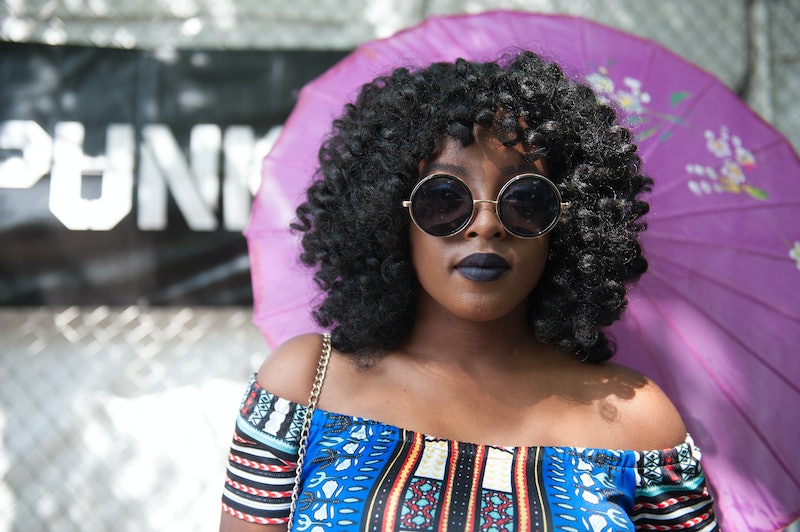 Considering we're all still recovering from the hot mess that was last December's Mercury retrograde, the fact that we're hurtling headlong into the century's longest total lunar eclipse literally a day after Mercury goes back into retrograde may set off your mental alarm bells. But never fear, folks; the fact that you're here and reading this means you can prep yourself for what might go down when the July 2018 total lunar eclipse and Mercury retrograde cross paths.

First, let's recap the astrology: Mercury retrograde is a period where Mercury seems like it's reversed course to move in the opposite direction, going from west to east instead of east to west. But per Mother Nature Network, that's not actually what's going on. What's up is that Mercury is actually just orbiting the sun more slowly than we are, so it appears to be moving in a different direction as our orbits criss-cross. But though Mercury's movement doesn't actually change, astrologers say it can be a rocky period for signs across the board, and it turns out the upcoming eclipse can actually have an effect on your horoscope as well.

Donna Page, a professional astrologer with a graduate degree in counseling psychology, told Women's Health, "In general, eclipses help shed light on certain areas of your life," and that this one in particular "will give you clarity about knowing what your heart wants, especially when it comes to friendships."

The reason this eclipse is so unique is that the sun is in Leo and the moon is in Aquarius, Page explained. She broke it down thus: Leo is "all about being able to connect with people who line up with your beliefs and philosophies;" and Aquarius "has a friendship energy," which means this eclipse "will make you re-evaluate your feelings about different relationships in your life, and whether you can accept people for who they really are," Page told Women's Health.

Now, as for how Mercury retrograde is going to play into this astrological cocktail, Page explained that it will "definitely" affect signs during the eclipse. "Overall, it can prompt a major re-think of whether you want your pride to get in the way of your life and the decisions you make," she said.

Mercury retrograde is ripe for fights with those you love, and the fact that the sun is in Leo may actually exacerbate that, astrologer and psychic Cindy Mckean told another Bustler. "This Mercury retrograde occurs in Leo, a zodiac sign known for drama, forgiveness, love, over-reactions, self-centeredness, and warmth, among other things," she explained. "When Mercury does its backwards motion in Leo, you can count on mountains becoming molehills."

Per Page speaking to Women's Health, the signs that most need to watch out during these next few days will be Leos and Aquariuses, of course, but also Taurses and Scorpios, which she said are the "fixed signs" — aka, people with them "tend to really want life to be a certain way, and may feel that even stronger around the eclipse," she said.

Of course, with preparation, any sign can weather the storms a double astrological event may throw your way. With the total lunar eclipse promising a super gorgeous blood moon this Friday, July 27, you can rest easy knowing that even if the stars (and the moon) have a bumpy ride in store for us, this astrological double whammy will be all wrapped up by the weekend. And even if that means a few more weeks to go until Mercury goes direct, with proper planning and a good attitude, any sign can make the most of it.

More like this
Here’s Your Daily Horoscope For February 1, 2023
By Mecca Woods
These 3 Signs Are The Master Chefs Of The Zodiac
By Kristine Fellizar
When Is The Next Full Moon? Your 2022 Calendar
By Nina Kahn and Brittany Beringer
Here’s Your Daily Horoscope For January 31, 2023
By Mecca Woods
Get Even More From Bustle — Sign Up For The Newsletter
From hair trends to relationship advice, our daily newsletter has everything you need to sound like a person who’s on TikTok, even if you aren’t.