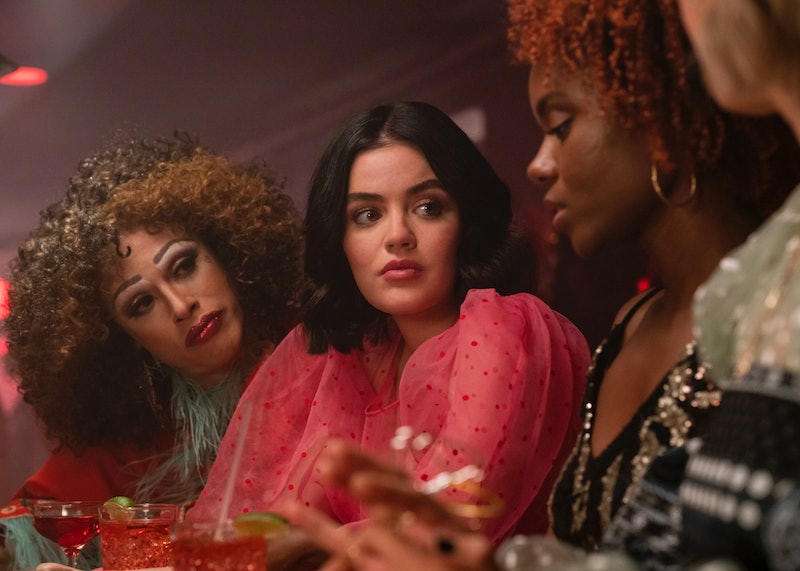 Riverdale spinoff Katy Keene is.... pretty much the exact opposite of Riverdale. Instead of a group of over-their-heads high schoolers navigating murders and Gargoyle Kings and family battles over rum recipes, the Katy Keene cast is just a bunch of hard-working New York artist-types trying to make their dreams come true in the big city. Overall, the show is more like Carrie Diaries or Gossip Girl in tone and plot, but it does share a major thing in common with Riverdale: Josie McCoy.

Katy Keene takes place five years ahead of the current Riverdale timeline, with a now 20-something Josie fresh to New York and ready to try and make it as a solo artist. Considering she already survived living in Riverdale — the apparent murder capitol of the world — she may be the one person for who the whole "If you can make it here, you can make it anywhere" cliché applies.

In addition to Ashleigh Murray as Josie, the series is headlined by Lucy Hale as the titular Katy Keene, and spotlights a bunch of familiar faces from stage and screen. Here's everyone you can expect to see pop up throughout the show.

Katy is an aspiring fashion designer who works at a high-end department store called Lacy's. She lives with her two roommates Josie and Jorge, and in her spare time, designs her own clothes.

Hale's most recognizable role is as Aria on Pretty Little Liars, which ended in 2017. Since then, she's starred in The CW's short-lived Life Sentence, and is set to lead the upcoming horror movie Fantasy Island.

Murray previously had a handful of minor episodic roles, but playing Josie on Riverdale and Katy Keene is inarguably her biggest to date.

Jorge is an aspiring Broadway star who hasn't managed to get his break, though he's beloved in the drag queen community as his alter-ego Ginger.

Before Katy Keene, Beauchamp was known for playing Angelique on Penny Dreadful and starring as Ray/Ramona in Stonewall.

Pepper is a a close friend of Katy's and an "it" girl about town who seems to know everyone.

You may recognize Chan's voice from Bojack Horseman, on which she voiced Pickles. She also played Dr. Maggie Lin on Saving Hope.

Make It Or Break It fans will recognize Holtz as Austin Tucker. He's also had roles in The Perks of Being a Wallflower, From Dusk Till Dawn: The Series, and Hunter Killer.

Alexander is the CEO of an entertainment company who's hoping to bulk up their music division. When he meets Josie, he immediately wants to sign her to their label.

Previously, Laviscount played Earl Grey on Scream Queens and had recurring roles on shows including Coronation Street, Episodes, and Snatch.

Alexandra is Alexander's twin sister who also works at Cabot Media. She doesn't take a liking to Josie, which puts her in conflict with her brother.

Before Katy Keene, Hyde played Gabi Granger on American Vandal, Nicole in The Wedding Year, and a young Jessica Pearson on Suits.

Gloria is Katy's demanding boss at Lacy's Department Store. She's played by Katherine LaNasa, who's been in shows like Two and a Half Men, Longmire, Devious Maids, Future Man, and the Dynasty reboot.

Luisa is Jorge's mother who runs the bodega underneath their apartment. She's also a former Rockette, so it's easy to see where he gets his love of performing from.

According to ComicBook.com, Miss Freesia a rich woman from the Upper East Side who loves a good con. She's sort of a mother figure to Pepper, and has taught her everything she knows.

Peters, meanwhile has been in a number of big-ticket shows including The Good Fight, Grey's Anatomy, Ugly Betty, The Jerk, Animaniacs, and Mozart In The Jungle.

According to Screen Rant, Big Time Rush's James Maslow is slated to play Alan M. Mayberry, who's being set up as a love interest for Josie.

Katy's big work rival at Lacy's is Amanda, played by Heléne Yorke. In addition to Katy Keene, York stars in Comedy Central's The Other Two and has appeared in The Good Fight, Masters of Sex, and Quantico. She's also voiced characters on Bojack Horseman and Family Guy.

In the Katy Keene comics, Randy Von Ronson is a wealthy man who becomes one of Katy's love interests, per Fan Sided. There's already a character named Randy Ronson on Riverdale played by Darcy Hinds, so perhaps Knight is playing a slightly older version of him?

As for Knight, viewers may know him from 17 Again or Sonny With A Chance. See him and the rest of the cast onscreen when Katy Keene premieres Feb. 6.