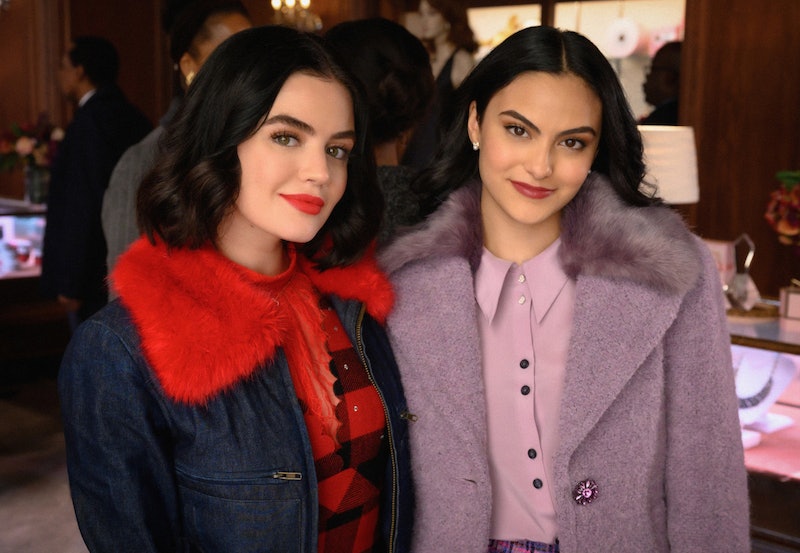 Spoilers ahead for Riverdale Season 4, Episode 12. The Katy Keene crossover in Riverdale's Feb. 5 episode does a lot to set the stage for the upcoming spinoff series, which stars Lucy Hale as the titular Katy. Namely, it fills in a lot of gaps about Katy's friendship with Veronica Lodge (Camila Mendes), which has until now only been alluded to vaguely.

Katy Keene takes place roughly five years ahead of the current Riverdale timeline, so you can think of the crossover as semi-prequel. In the episode, Veronica goes to New York for an interview at Barnard College, where she meets up with her old friend Katy for a shopping spree at Lacy's department store. When they take a break to catch up, we learn that Katy and her mother helped design Veronica's Quinceañera dress. "The dress that launched this beautiful unexpected relationship," Veronica fondly remembers.

This plants several seeds for Katy Keene. In the show, Katy is an aspiring fashion designer working at — you guessed it — Lacy's. She also tells Veronica that she's only just made it official with her boyfriend K.O., and they're still together five years later when Katy Keene kicks off. Plus, she mentions going to see a drag show at Molly's Crisis, where Katy's roommate Jorge regularly performs on Katy Keene, and that her mother is sick (in Katy Keene, her mother has sadly passed away).

According to Roberto Aguirre-Sacasa and Michael Grassi — executive producers on both shows — this is just the "first Riverdale/Katy crossover." They told E! News in a statement that they wanted to start by taking "Veronica to Katy's world — New York City — and [establishing] Katy in the Riverdale universe." Now, they're looking ahead to the next crossover, which could see Archie (who is notably into boxing) pop up in NYC. Grassi teased to Deadline that we "will definitely see someone from Riverdale and K.O. face off in the [boxing] ring" at some point. And whenever that someone does show up on Katy Keene, Aguirre-Sacasa told Variety that the show will "fill in [what] the character's been doing the past five years."

Until then, every week of Katy Keene will sort of feel like a crossover, since Riverdale's Josie McCoy is a central character in the cast. She's now in her 20s, still chasing her music dreams, and living with Katy — probably thanks to a little introduction from Katy's old friend Veronica.