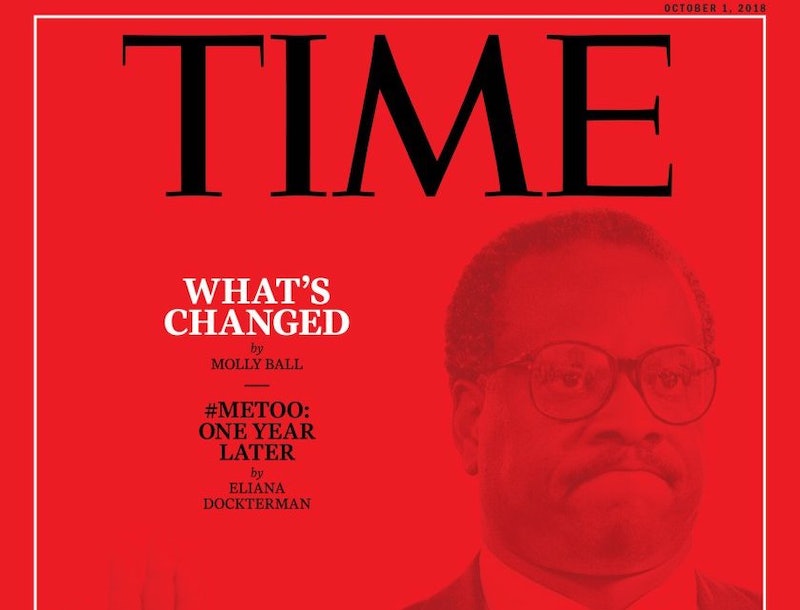 The parallels between the current Supreme Court nomination process for Brett Kavanaugh and how it went for now-Supreme Court Justice Clarence Thomas are hard to overlook. In both cases, the men with conservative-leaning opinions were nominated by a Republican president for the Supreme Court, and in both cases, the process seemed to be heading smoothly towards a successful nomination — until allegations of sexual misconduct came out (allegations which both deny). The new Kavanaugh and Clarence Thomas TIME cover addresses these eerie similarities, while pointing out what's changed in the 27 years between them.

The cover features a stark red backdrop. In the bottom-right corner of the cover, in the foreground, there's a picture in full color of Kavanaugh holding up his hand to swear to tell the truth in his nomination hearing. But looming in the background is the shadow of the parallel image of Thomas holding his hand during his own 1991 hearing process. There are two headlines listed on the cover: "What's Changed" by national political correspondent Molly Ball and "#MeToo: One Year Later" by culture writer Eliana Dockterman. Both of those articles speak to a larger narrative. While there are certain similarities between Thomas' and Kavanaugh's nomination processes, they're coming at wildly different times for American society.

The timelines for both men's nomination processes were extremely similar. Both were nominated to fill a seat that was vacated by a justice who announced his retirement in the summer, as the Supreme Court's term year ended. Both men met with senators, and both men had public confirmation hearings in September under the Senate Judiciary Committee's purview. In both cases, the Senate Judiciary Committee was prepared to move forward with a vote (although in Kavanaugh's case, that came with heavy protests from the Democrats in the room, who currently make up the minority) — and in Thomas' case, the committee actually did vote to send the nomination to the full Senate without a recommendation, according to the Cox Media Group National Content Desk.

But then, in both cases, stories from women that were supposed to be confidential were brought to the public by media reports. Anita Hill alleged that Thomas sexually harassed her at work. Thomas "categorically denied all of the allegations, and denied that I ever attempted to date Anita Hill," as he told the committee. Christine Blasey Ford alleged that Kavanaugh attempted to sexually assault her at a party when they were in high school, which he "categorically and unequivocally" denies.

Hill ended up testifying to the Senate Judiciary Committee, which at the time was completely made up of men. Ford was invited to testify to the committee, which now has four women — all on the Democratic side — but has not yet agreed to do so. Hill's testimony was a personal grilling, filled with shaming questions — largely owing to the time, when sexual harassment wasn't considered as serious of an issue — and, ultimately, Thomas was confirmed anyway. Ford appears to be at least somewhat influenced by that in her waffling on whether or not to testify — "Why suffer through the annihilation if it’s not going to matter?" she told The Washington Post.

But today, as the Time cover and its stories allude, society has made some changes. In the 27 years since Hill's testimony, more women entered politics and workplace sexual harassment has been taken more seriously. Last year, the #MeToo movement spurred this on to an even greater degree as many men across industries lost their jobs over allegations. The types of questions senators asked Hill would today be a major mark on their record for many voters across the country.

While there are those differences, though, sexual harassment and sexual violence against women still happens, despite a change in the conversation. And while maybe the discussion has changed, it's not clear that it will be enough to completely change the course of Kavanaugh's nomination.