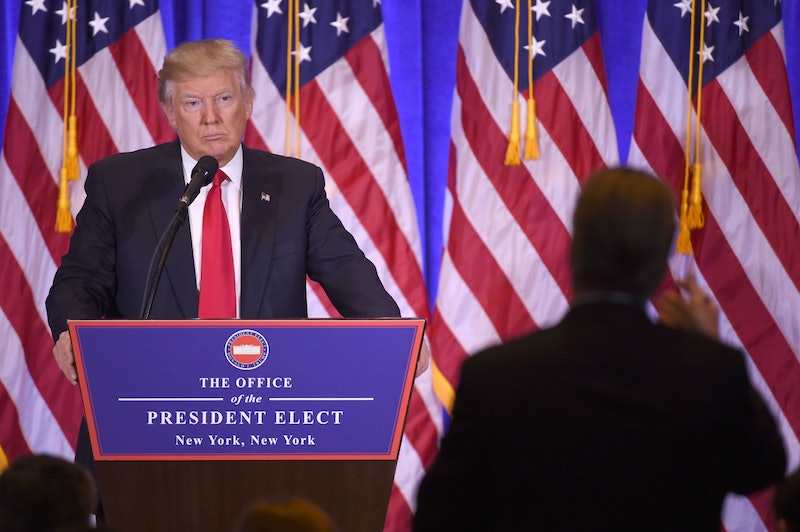 President-elect Donald Trump gave a press conference on the morning of Wednesday, Jan. 11. It was his first since July of last year, and his first since winning the presidency. Although it was a bizarre and intimidating affair for what it signaled about freedom of the press in the Trump era, (he denounced CNN as "fake news"), something extremely notable happened at the very end. Trump evaded the final question of his press conference, refusing to answer if anyone on his campaign had contact with Russia prior to the election.

That was a core piece of the unverified, controversial intelligence memo CNN reported on just one day earlier, which was ultimately followed up (and somewhat drowned out) by the lurid allegations revealed by BuzzFeed's subsequent document dump. Trump called this BuzzFeed report "FAKE NEWS" in a tweet.

An additional report by The Guardian stated that the FBI attempted to secure a FISA warrant in order to "monitor four members of the Trump team suspected of irregular contacts with Russian officials." The warrant was ultimately refused, which is notable for just how rare it is for a FISA court not to hand over such a warrant (although the FBI secretly monitoring members of a presidential campaign seems like a uniquely loaded and fraught request).

But basically, from a reporting perspective, this is a piece of information that ought to have a giant, bright red circle around it. Who in the Trump campaign was believed to be in contact with Russian government, and more to the point, did it actually happen?

One of the useful tools journalists have to try to answer questions like these is to get the people involved on the record with clear, concise denials or explanations, which is precisely what the final reporter at the presser tried to do. Here's what she asked:

Can you stand here today, once and for all, and say that no one connected to you or your campaign had any contact with Russia leading up to or during the presidential campaign, and if you indeed do believe that Russia was behind the hacking, what is your message to Vladimir Putin right now?

Although the first part of the question was a commendable attempt to make Trump provide a definitive answer, and in a public setting in which he still faced throngs of reporters, he was sadly able to use the second part of the question like an escape hatch. He began as though he were answering the points in reverse order, then never actually went back around to the question of whether anyone connected to him or his campaign had any contact with Russia.

Here was Trump's answer in full ― it's more than a little rambling, but hey, better get used to that now:

He shouldn't be doing it, he won't be doing it, Russia will have much greater respect for our country when I'm leading it than when other people have led it. You will see that. Russia will respect our country more. He shouldn't have done it, I don't believe he'll be doing it more. Now, we have to work something out, but it's not just Russia, take a look at what's happened, you don't report it the same way. 22 million accounts were hacked in this country, by China, and that's because we have no defense. That's because we're run by people that don't know what they're doing.

Russia will have far greater respect for our country when I'm leading it. And I believe, and I hope, maybe it won't happen, it's possible, but I won't be giving a little reset button like Hillary, here press this piece of plastic, guy looked at her like 'what is she doing?' There's no reset button. We're either going to get along or we're not. I hope we get along, but if we don't that's possible too. But, Russia, and other countries, and other countries, including China, which has taken total advantage of us economically, totally advantage of us in the South China sea by building their massive fortress. Total. Russia, China, Japan, Mexico, all countries will respect us far more, far more than they do under past administrations.

And with that, Trump was off. After a brief explanation what the piles and piles of file folders on the table next to him were ― "just a piece of the many many companies that are being put into trust," he said ― he left the stage. All the while, a reporter's voice in the crowd could still be heard calling out: "sir, you did not answer whether any of your associates were in contact with the Russians."

It was a pretty glaring omission, especially with the reporting that's currently swirling. CNN, for its part, has released a statement following the presser, criticizing Trump for labeling them "fake news" in his testy back-and-forth with their reporter Jim Acosta, distancing themselves from BuzzFeed's dump of the full unverified memo, and accusing the president-elect and his team of knowingly conflating the two.

If this is the precedent-setter for what press conferences will look like during the Trump era, it's no stretch to say that getting straight, unvarnished answers from the administration ― a task that's never easy, regardless of who's in power ― is going to be a huge challenge. And with the president-elect of the United States openly warring with a CNN reporter and deriding them as "fake news," it's clear that freedom of the press is going to be a forefront issue for the next four-to-eight years.