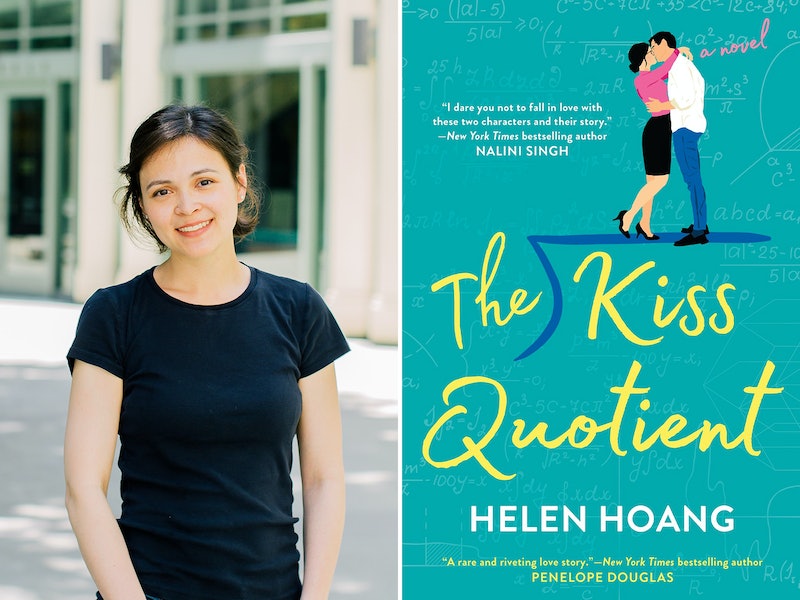 If you read one book this summer, let it be The Kiss Quotient by Helen Hoang. The perfect blend of sexy and sweet, the new romance novel is the story of Stella, a brilliant statistician on the autism spectrum who knows everything there is to know about algorithms but doesn't know anything about romance. In an effort to grow comfortable with the idea of dating and falling in love, she hires a male prostitute to teach her everything there is to know about sex and relationships — but she doesn't expect that they will find themselves completely entranced by one another. Not only is this book seriously hot, but it also does a brilliant job of showing what it's like to navigate relationships as a person on the autism spectrum.

Like Stella, Hoang is autistic, but she wasn't diagnosed until adulthood. While researching autism on behalf of her preschool-aged daughter, she learned about the unique ways it presents in women and was blown away by how familiar it felt to her own experiences.

The realization that she might be on the autism spectrum had a huge impact on Hoang's writing. "It was the startling knowledge that other people like me exist, that I’m not alone," she tells Bustle. "Ever since I was little, I’d been watching others and struggling to emulate them because I didn’t think I was acceptable the way I was. Discovering that there are entire groups of people who have similar quirks and experiences as I do changed everything."

She had already began writing a version of this book at the time. But when Hoang began to learn about autism, she decided to make it a part of the story. It unlocked Stella's character for her in a major way. "When I wrote Stella, I embraced the parts of myself that I’d always been trying to change or hide," Hoang says. "At the same time, I quit trying to copy other authors, and I wrote the way [that] felt right for me. This helped me find my unique writing style or voice, and it was just plain fun. Also, as my therapist and I explored my childhood and analyzed my habits and interests, I got a better understanding of myself, which translated into a clearer and more real Stella. I feel like she and I grew together."

"Discovering that there are entire groups of people who have similar quirks and experiences as I do changed everything."

At the beginning of The Kiss Quotient, Stella has never felt comfortable in romantic situations, and her sexual experiences have been not-so-great. But when her mother pushes her to get a boyfriend, Stella becomes curious and decides to do the logical thing: hire a professional to help her out.

Enter Michael. He's a sexy male escort with his fair share of secrets. Years ago, he left his life as a fashion designer to return home and take care of his mother after she was diagnosed with cancer. Unbeknownst to his family, he has been working as a sex worker to pay for her treatment.

"I got a better understanding of myself, which translated into a clearer and more real Stella. I feel like she and I grew together."

Michael and Stella are immediately attracted to each other in a way that far extends the bounds of their professional agreement. In fact, Stella convinces Michael to break his one-time-only rule and give her "lessons" on sex and relationships. She even writes out a curriculum.

Stella doesn't tell Michael she has autism, but he quickly realizes that she has unique needs. Instead of having sex immediately, they work together to figure out how to make her comfortable in romantic situations. It's sweet and steamy and oh, so good.

Honestly, what makes these "lessons" truly enticing is the intimacy that forms between Michael and Stella as they get to know each other and learn each other's sexual desires. "The biggest thing when I’m writing love scenes isn’t really how to make it sexy, but rather how to make it emotional," says Hoang. "I want the characters naked on all levels and connecting with their bodies, their minds, and their hearts, otherwise it’s just IKEA assembly instructions."

Soon, Michael and Stella's lessons go beyond the bedroom. The two go out on dates together, and Stella even meets Michael's large, bustling family. On these dates, readers witness how Stella's difficulty understanding social situations can make things challenging. For instance, on her first visit to Michael's mother's home for dinner, Stella accidentally treads on some sensitive topics and upsets his mother without realizing it.

"I want the characters naked on all levels and connecting with their bodies, their minds, and their hearts, otherwise it’s just IKEA assembly instructions."

"Writing the scenes where Stella failed socially was extremely challenging. I can’t predict when I’m going to horribly offend people (if I could, I wouldn’t do it!), and devising those situations twisted my brain in a new way," says Hoang. "My goal for those scenes was to show why someone might fail spectacularly in social situations despite their best efforts and how horrifying and bewildering it feels. I hope it inspires empathy and kinder judgement."

Another major challenge for Stella is her increased sensitivity to her surroundings. She panics and shuts down when she's overstimulated. Factors such as loud noises, large crowds, and being touched can easily send her spiraling. One pivotal scene in the book comes when Michael and Stella go to a club together, and Stella becomes completely overwhelmed. Fortunately, Michael's cousin, Quan (whose brother is autistic), realizes what's going on and helps her.

"My goal for those scenes was to show why someone might fail spectacularly in social situations despite their best efforts and how horrifying and bewildering it feels. I hope it inspires empathy and kinder judgement."

"The first time I went to a club, I shut down from overstimulation and panic and got lost in the crowd. I was too scared to even cry, and a friend noticed and led me out. I still remember his hand on mine," says Hoang. "Quan was inspired by that moment, and when I get lost in my writing, he leads me out. He’s done it multiple times."

As the novel progresses, Stella and Michael start to uncover each other's secrets. And the more they learn about one another, the harder they fall for each other. Perhaps what makes The Kiss Quotient so particularly sweet is that ultimately, it's not a story about how to change yourself to be in a relationship. Rather, it's a story about finding a relationship that works for who you are and what you need.

"As someone who was diagnosed later in life, one of my biggest struggles has always been self-acceptance," Hoang says. "I used to put a lot of effort into changing myself to please people, and that worked—I was able to develop relationships of a sort. But they exhausted me, and as a result, they frequently ended in failure. In order to have real relationships, I needed to feel safe being who I am. In other words, I had to learn trust and self-acceptance."