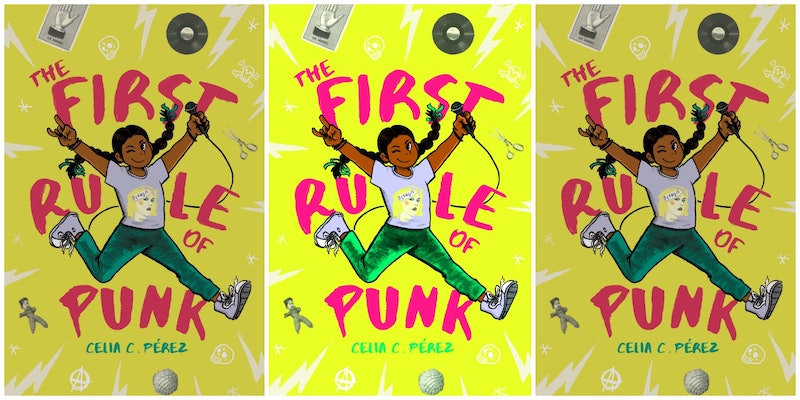 Have you ever been asked, "What are you?" by a seemingly well meaning new friend or stranger? I always want to respond with something like "I don't answer existential questions before I've had my coffee!" but of course, I know what these people really mean. "What are you?" can be directly translated to: "What is your ethnicity?" "Where are you from?" "I can't place you and it's making me uncomfortable!" And it often gets even weirder when I answer that I am proudly made up of a hodgepodge of a few different heritages, but I identify as Latina. Spoiler alert: I am white and do not speak fluent Spanish.

And because I do not look or sound like the "typical" Latina (though, guess what, there is no such thing!) what I hear most often is that I don't seem Puerto Rican at all. I didn't realize that people thought I was someone who could be considered weird or different from what I seemed until I was in middle school, around the time my classmates had gotten old enough to be fully indoctrinated by the stereotypes we see all around us. And, for the most part, there just weren't stories fighting back against these stereotypes, showing Latinx stories about people who were as diverse, unique and undefinable as we know we are.

So when I read Celia C. Pérez's middle grade novel The First Rule of Punk this year, I was absolutely blown away; not only by how relatable the story would have been to middle school me, but how recognizable it still is to me, even now. This is, quite simply, the story I wish I had when I was a kid. And there is one huge, and hugely exciting, reason why The First Rule of Punk feels so authentic: the book was created by a core team that is nearly entirely Latina, including author Celia C. Pérez, illustrator Kat Fajardo, editor Joanna Cardenas, and agents Linda Camacho and Stefanie Von Borstel.

"It was definitely special to be able to create this book with a team of Latinas," author Celia Pérez tells Bustle. "I was fortunate that I didn't have to fight for it, but I think it's unfortunate that this kind of partnership is still an anomaly in publishing. My interest in and desire to see a more robust representation of Latinos in children's literature, naturally led to wanting to support and align myself with other Latinas when it came to creating this book."

The First Rule of Punk follows 12-year-old Malú (or Maria Luisa, if you want to annoy her) who has just moved to a new town with her mom. On her first day at school, she inadvertently upsets Posada Middle School's queen bee, violates the school's dress code with her punk rock look, and disappoints her college-professor mom in the process, who just wants her to be a proper señorita. Her dad, who now lives a thousand miles away, says things will get better as long as she remembers the first rule of punk: be yourself. And the real Malú loves rock music, skateboarding, zines, and Soyrizo instead of chorizo (hold the cilantro, please.)

"I knew that identity and culture would be at the heart of the story I wanted to write," Perez says. "Growing up as a bicultural person, I did have a similar experience as Malú. I never felt like I fully fit in anywhere. I grew up in Miami in the 80s. Being half Cuban, I never felt Cuban enough. But there were also a lot of things about Mexican culture that I wasn't exposed to because we lived in an area that didn't have a large Mexican population, so I never felt Mexican enough. It wasn't until I left home for college that I started to really think about and explore what culture meant to me. Embracing my Cuban and Mexican heritage became very important. I needed these anchors to my past."

"I never felt like I fully fit in anywhere."

And it is just that which Malú begins to explore when she meets Mrs. Hidalgo, a local coffee shop owner and the mother to one of Malú's classmates. Mrs. Hidalgo listens to Mexican punk bands and wears cool clothes, and she begins to introduce Malú to the parts of Latinx culture she never quite realized existed. She starts to learn about Selena and The Zeros, Lola Beltran and "Cielito Lindo." Soon after, Malú assembles a group of like-minded misfits at school and starts a band, feeling at home for the first time both in her new hometown and in her own skin, embracing tradition while staying true to herself.

"I related to this book in a big way. Even though the details of Malú’s experience obviously aren’t identical to mine, Celia hit a nerve," Joanna Cardenas says. "Here was a book that invoked Selena Quintanilla, zines, conchas, vinyl, toilet paper dolls, ranchera music I grew up hearing, 'sad Mexican stories,' tattoos, El Chavo, and hair dye all in one narrative. I thought about what a book like this would have meant to me as a kid and what it would mean for kids today to grow up with it."

It is this beautiful combination of Latinx pride, love for the arts, and a fierce splash of feminism (as Malú stands up to an anti-punk school administration to fight for her right to express herself) that made this such a raw, realistic read for me, and for its creators. It felt like this perfect mix of who I was as a kid, and who I am now; what I felt then, and what I still struggle with now. No doubt this will be the case for tons of readers, of all ages, who will see themselves within these pages, too.

"I think it's safe to say that most kids dealing with different cultural identities will struggle with the inevitable feeling of Ni de aqui, ni de alla (neither here or there)," illustrator Kat Fajardo says. "From my experience, it's really tough balancing both worlds and not feel like an outcast for being 'too American' or 'too Latina.' And it's the worst when you're battling those emotions alone. But having access to books like The First Rule of Punk, [will] help kids understand that it's a common feeling shared by most people, and just like Malú, they should embrace that uniqueness. I'm slightly jealous but also very happy to know there will be kids growing up with this book and seeing themselves in it."

I think it's safe to say that most kids dealing with different cultural identities will struggle with the inevitable feeling of Ni de aqui, ni de alla (neither here or there.)"

And of course, it's this that we need now more than ever — Own Voices reads for every voice, celebrating who we are now and our journeys on the way to who we want to be, stereotypes be damned.

"For me, the message is that there's no barometer for being Latinx or of any particular culture," literary agent Linda Camacho says. "Be your authentic self and don't try to fit into an impossible mold created by others."

And as Malú's creator, Pérez knows just how influential art, music and, of course, books, can be in helping you piece together that ideal version of your authentic self... and it's one that I hope a generation of kids like me, like Pérez, Fajardo, Cardenas and Camacho, and maybe even like you, will benefit from for years to come.

"Everyone has the need to find a sense of place in the world. Being true to who you are can be such a difficult thing to embrace when you're facing pressure from friends, family, society, the media, and when you don't see yourself reflected in the world around you," Pérez says. "Ultimately, I hope readers will find a little bit of themselves in this story and realize that there's no one way to be anything. And if there's something they need and don't see in the world, I hope they feel inspired to create it."

More like this
There’s A Brand New Drag Race Spin-Off & It’s Dropping Very Soon
By Sam Ramsden
The Most Anticipated Books Of October 2022
By K.W. Colyard
For Mur Lafferty, Genre Is Everything
By K.W. Colyard
'Firefly Lane' Season 2 Will Be The Show's Last — But There's A Twist
By K.W. Colyard and Grace Wehniainen
Get Even More From Bustle — Sign Up For The Newsletter