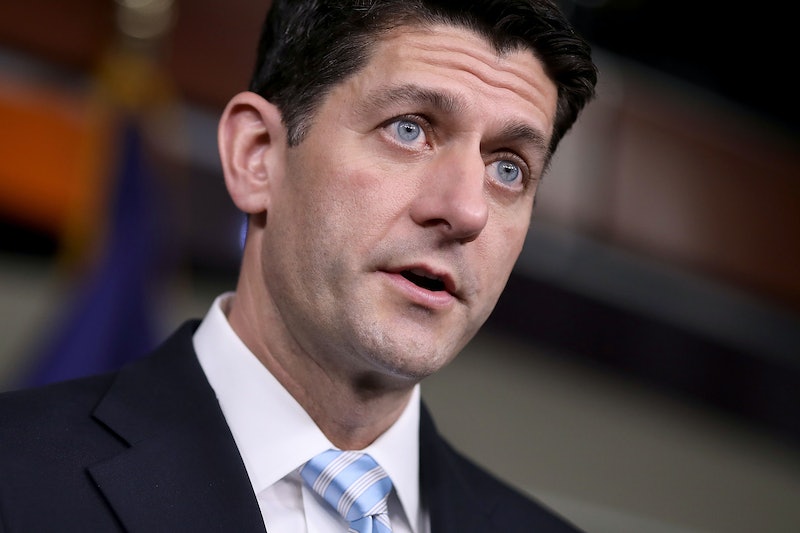 At a town hall on Thursday, CNN's Jake Tapper asked House Speaker Paul Ryan about his longstanding opposition to Planned Parenthood and the recent Republican proposal to defund the organization. He responded with a time-honored linguistic trick: He implied, inaccurately, that funding Planned Parenthood is tantamount to "taxpayer funding for abortion." That's simply not true, and judging by the flustered response that Ryan gave when called out on his misdirection, he knows it. He said:

Notice the bait-and-switch here. First, Ryan speaks against "taxpayer funding for abortion." Seconds later, he's talking about "taxpayer money to an organization providing abortions." There's a world of a difference between those two  — a difference that Ryan would rather you not spend too much time thinking about.

Tapper, who was moderating the town hall event, pointed out that federal law already prohibits taxpayer money from funding abortions, thanks to the Hyde amendment. This begs the question: That being the case, what's the argument for defunding Planned Parenthood?

Ryan is normally a very well-spoken politician. When he suddenly becomes discombobulated and starts awkwardly cutting off his own sentences, it's usually a good sign he's trying to mislead you, and that's certainly the case here. With his word salad, Ryan was trying to imply that Planned Parenthood takes federal dollars and reallocates them to pay for abortions. But that simply isn't true.

What the Hyde Amendment specifically prohibits is the use of taxpayer dollars being "expended for any abortion" or "expended for health benefits coverage that includes coverage of abortion." From a practical standpoint, this means that the federal government can't offer Medicaid plans that cover abortion.

And it doesn't. If you get your health insurance through a federal Medicaid plan, and you then seek an abortion, your insurance plan won't cover it. This is the Hyde Amendment in action.

But Planned Parenthood does a lot more than just provide abortions (including offer contraceptive services, which reduce the need for abortion). Around 2.5 million men and women receive health care from the organization every year, but annually, abortions account for only three percent of the services it provides. This is why it's eligible for federal funding to begin with, but again, none of the federal dollars it receives are used to pay for abortions.

It's not even clear how such a conspiracy would work. In order for Planned Parenthood to be violating the Hyde Amendment, which is what Ryan is implying, it would have to be secretly hiding its federal funds in an undisclosed account and then offering free abortion services to uninsured or Medicaid-insured women. That's not happening, and in fact, the Planned Parenthood states explicitly in its website that it doesn't offer free abortion services.

In his comments, Ryan repeatedly promoted "federal community health centers" as an alternative to Planned Parenthood.

"There's no conflict by [sic] making sure that these dollars go to federal community health centers," Ryan said, "which provide these services and have a vastly larger network than these Planned Parenthood clinics."

But this is incorrect. Federal community health centers are indeed a great resource for low-income Americans, but to say that they have a "vastly larger network" than Planned Parenthood is absurd. In Texas, for instance, there are a grand total of just three federal community health centers, and because they're all within 30 miles of one another, huge swaths of the state can't access them. But there are 39 Planned Parenthood locations spread throughout the state.

What Ryan really believes is clear: Any organization that provides abortions at all should not exist, even if it provides many other invaluable, life-saving services. But he knows it's a losing argument. So, he simply fudges the details instead, and hopes that you don't notice.