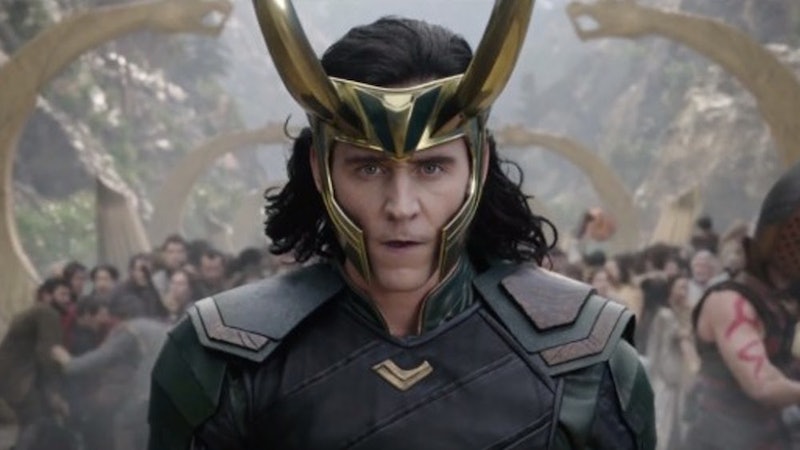 We already know that the God of Mischief is coming to the small screen, but it turns out that he might not be the only beloved Marvel character featured in the series. Warning: Endgame spoilers ahead! According to Endgame directors Joe and Anthony Russo, the Loki TV show could also include Captain America, which would help to tie up a particularly intriguing loose end left behind in the wake of Avengers: Endgame. This, of course, is in reference to when Past Loki from 2012 stole the Tesseract and teleported away during the time heist. Originally, Loki was supposed to return to Asgard with his brother Thor, but after his escape, where he ended up going is anyone's guess.

During a recent interview with Business Insider, the Russo brothers hinted that the answer to that question could potentially get resolved in the new Loki series, which will be available on Disney's upcoming new streaming channel Disney+, and the key to doing so may fall to America's favorite hero: good ole Cap. In fact, catching Loki might be one of the missions Captain America took on when he journeyed back to the previously disrupted timelines in order to restore the Infinity Stones they had borrowed to defeat Thanos. Cap ended up deciding to stay in the past and do a little of that living Tony Stark had always suggested. But that doesn't mean he couldn't have had a Loki run-in along the way.

“Loki, when he teleports away with the Time Stone, would create his own timeline. It gets very complicated, but it would be impossible for [Cap] to rectify the timeline unless he found Loki,” Joe explained to Business Insider. “The minute that Loki does something as dramatic as take the Space Stone, he creates a branched reality.”

It gets a little tricky when you start dealing with different timelines and the concept of the multi-verse, but it makes sense that Loki's escape wouldn't be able to go unchecked. And considering it was Cap's mission to return everything that they had altered in the past back to normal, Loki's Tesseract heist would have to be included in that. So basically a Loki and Cap face-off feels imminent. And hey, you never know, perhaps it'll even end up evolving into a full-blown friendship along the way.

Additionally, the Russo brothers divulged to the outlet that they think that when Cap went back to the past to live happily ever after with his former flame Peggy Carter, it happened in a separate timeline of his own creation, unconnected to the MCU fans have come to know. "So he would have to come back to this timeline in order to hand off the shield,” Joe stated. (Though how Old Cap would find his way back to his original timeline after creating a brand new one remains to be seen. Also, is anyone else's head spinning?)

Either way, now there's just one more reason to get excited for Disney's new Loki series. Consider this the bromance we never knew we always wanted.

More like this
Nicola Coughlan Shared A Lady Whistledown Excerpt From ‘Bridgerton’ Season 3
By Grace Wehniainen, Alyssa Lapid and Sam Ramsden
The 'Andor' Timeline, Explained
By Gretchen Smail
Alicent's Green Dress In 'House Of The Dragon' May Be An Act Of War
By Kadin Burnett
Lin-Manuel Miranda & Tituss Burgess React To 'Little Mermaid' Casting Backlash
By Radhika Menon
Get Even More From Bustle — Sign Up For The Newsletter