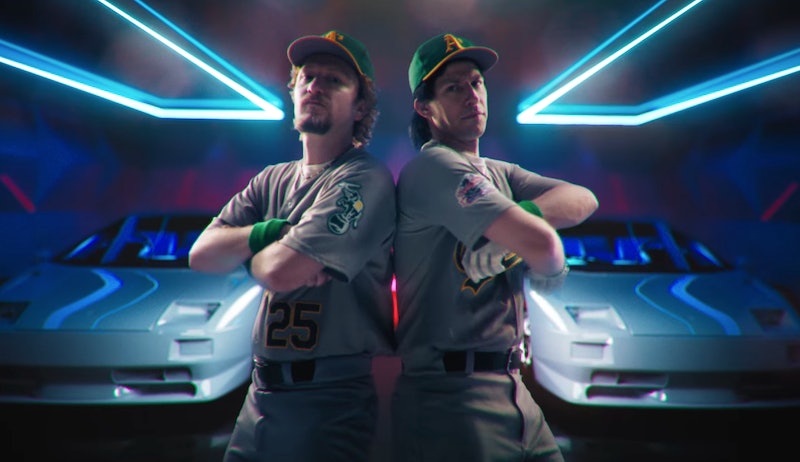 The Lonely Island has gone Lemonade for their "visual poem" on Netflix with The Unauthorized Bash Brothers Experience. While Beyoncé herself doesn't show up, the cameos in the Lonely Island's Netflix special will absolutely make fans of Andy Samberg's other projects happy. For the trio's latest endeavor, Samberg and Akiva Schaffer portray the "Bash Brothers" of '80s baseball — Jose Canseco and Mark McGwire. And even if you aren't so well-versed in these former Oakland Athletics players, you'll be just fine following along to the Lonely Island's visual rap album — especially when it features such stellar cameos.

The Unauthorized Bash Brothers Experience is chock full of '80s references with shoutouts to Steven Seagal, Madonna, Rambo, supermodel Kathy Ireland, and Michael J. Fox's Family Ties character Alex P. Keaton. Third Lonely Island member Jorma Taccone even pops up in the credits as a version of NFL quarterback Joe Montana. Within all these references to big hair, leggings, and steroid use are some great guest stars that help to make the music videos grand slams. Many of the actors have worked with Samberg on shows like Brooklyn Nine-Nine and Saturday Night Live before, but there are a few surprises. So no worries if you have no idea who the home-run-hitting Canseco and McGwire are because you'll recognize these stars in The Unauthorized Bash Brothers Experience.

More like this
Snoop Dogg & Michelle Pfeiffer Lead Moving Tributes To Coolio
By El Hunt
Is Dua Lipa Dating Trevor Noah? New Photos Show Them Kissing & Hugging
By Brian Anthony Hernandez and Martha Sorren
Everything To Know About Taylor Swift’s 10th Studio Album, 'Midnights'
By Grace Wehniainen and Jake Viswanath
Twitter Is Freaking Out Over Rihanna’s 2023 Super Bowl Halftime Show Announcement
By Stephanie Topacio Long
Get Even More From Bustle — Sign Up For The Newsletter