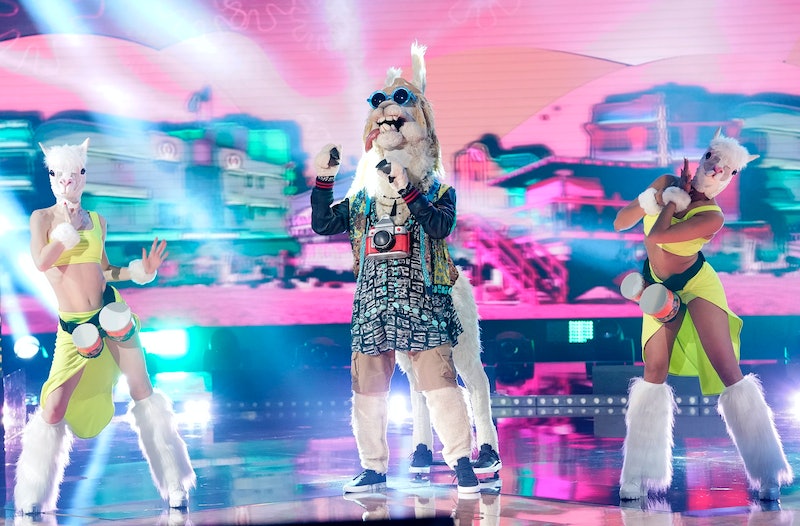 After a brief one-month break, The Masked Singer has returned, and so have theories about its Season 3 celebs. Premiering after the Super Bowl on Feb. 2, the show promises big names, challenging clues, and a few new twists. Executive producer Izzie Pick Ibarra told Variety that they realized fans were getting savvier about piecing together the evidence in Season 2, so this time around, they had to up the difficulty level.

"Some of those rabid followers were taking off our voice modulation. It gets that serious," she said. "We've realized how people work things out faster than other clues, which clues are ones that maybe get too definitive answers, so we're trying a slightly different approach for how we do our clue packages."

Still, that hasn't intimidated The Masked Singer's viewers. Though there's very little information about Season 3's 18 costumes (a few haven't yet been revealed), guesses about who could be hiding inside them are already impressively detailed — and this is only the start.

In the Season 3 trailer, Masked Singer host Nick Cannon delivers the Mouse costume to a Beverly Hills home with a 3340 house number on its gold and silver buzzer box. Accompanied by a tutu-clad Chihuahua, a person wearing pink sweatpants and furry boots signs for the delivery.

In the comments below the video, fans are already convinced this means it's Paris Hilton. She reportedly has a 3340 house number in Beverly Hills, and all of the signs point to her pink and glittery early 2000s aesthetic. There's also a guess that, for similar reasons, it's her former Simple Life partner in crime, Nicole Richie.

In the Season 3 trailer, the face of the mysterious man who accepts the Robot mask is hidden by a large cowboy hat. The whole scene is very Western-themed, which made fans think the secret celebrity could be a country music artist. Without much else to go off of, Billy Ray Cyrus and Darius Rucker are the top guesses in the YouTube comments. Lots of people also speculated Lil Nas X ("Cowboys and robots? Old town road and panini?" one user wrote), but considering how busy the 20-year-old has been lately, it's not likely he has time for the show.

O.G. Masked Singer fans will recall that Season 1 winner T-Pain wore a blue monster costume, which is why many believe that Miss Monster is his wife, Amber Najm. Another theory is based off of a line Cannon says in the trailer ("Season 3 is about to be lit!"), which could be a reference to Alicia Keys and her hit song "Girl on Fire." Others are hopeful that it's the mother monster herself, Lady Gaga. Again, not likely.

Because she famously spelled b-a-n-a-n-a-s in in her 2004 hit "Hollaback Girl," Gwen Stefani is a popular guess here (maybe this is the real reason she left The Voice). Others say the person in the costume is too tall to be Stefani, and that the comedic undertones instead point to someone like Al Yankovic.

Masked Singer costume designer Marina Toybina revealed to Entertainment Weekly that the gilded White Tiger's costume is Egyptian-inspired. "He's just fun, outgoing, incredible, and loves his costume," she said of the celebrity inside. "It is somebody that enjoys his performance and is definitely larger than life on stage." Running with that description, fans have theorized it's either Jack Black, Dwayne Johnson, or Dan Aykroyd.

In another preview, Kangaroo is introduced in an outback setting, which makes people think the singer is Australian. Considering the Kangaroo has a pouch, they also think it's someone who is a mother. Australian actress Rose Byrne checks all of those boxes, and she also starred in a movie The Boxer and The Bombshell, which could have inspired Kangaroo's boxing gear.

A preview clip from Ken Jeong's appearance on The Tonight Show with Jimmy Fallon revealed two clues from the Llama's clue package: an album called The Sounds of Seattle and a call sign for 23.3 The Wool. With that, one Reddit user guessed the person behind the four-legged character is Drew Carey. "Drew is co-owner of the Seattle Sounders football team," Alkali13 wrote. "There were 233 episodes of The Drew Carey Show according to IMDb. Also, Drew was in radio in the military."

The Llama also wears a camera around its neck, which could allude to the fact that Carey has dabbled in sports photojournalism. Not to mention, his former Whose Line Is It Anyway? co-star Wayne Brady won Season 2.

Theories are split on this one. Some think the Frog costume gives off major The Mask vibes that point to Jim Carrey. "I won't be forgotten," is one hint the show has shared on Instagram, which could be a reference to Carrey's movie Eternal Sunshine of the Spotless Mind, in which his significant other erases him from her mind. However, an extended version of the Season 3 trailer shows Cannon delivering the Frog costume to someone (presumably a woman) running on a treadmill, where a platinum record is hanging on the wall nearby. This has led some to believe Frog could be Kesha or Demi Lovato.

The Turtle's scene in a Season 3 preview appears to take place in a school, where a Chicago sports jersey is hanging on the wall. This has prompted some to speculate that the Turtle is a Chicago Bears player. Others think the Turtle's rock 'n roll-themed attire and guitar prop suggests a rock artist, but no one has honed in on a specific person.

There's not much out there on the Astronaut yet, but some early guesses include *NSYNC's Lance Bass because he won an MTV Award (hence the Moon Man), and has publicly spoken about his plans to undergo space travel. There are also quite a few guesses for Bill Nye, because science?

Guesses are all over the place for this one. Comments under the Swan's Instagram reveal say it could be a dancer, but quite a few Redditors are leaning toward Alex Borstein, who's known for her MADtv character Ms. Swan.

So far, Kitty has two noteworthy features: her eyes are two different colors, and she's dressed in a showgirl-like costume. As such, a good guess is that it's Saved by the Bell's Elizabeth Berkley, who has heterochromia and starred in the 1995 film Showgirls.

The Taco is one of the show's most recent reveals, so there aren't a lot of guesses yet. Mostly, fans are just underwhelmed by the costume.

Masked Singer fans are loving the Bear's tie-dye, cotton candy-colored aesthetic, but they're not quite sure who's inside the costume. Theories range from Anna Kendrick to Melanie Martinez to a possible drag queen or YouTube star.

There's not much info out on The Rhino either, but its retro aviation-themed outfit along with its savanna-set photos are giving fans on Reddit major Jumanji vibes. There are lots of guesses for Nick Jonas and Jack Black, but those are just first impressions. Once The Masked Singer premieres, things will really start to ramp up.

More like this
Kathy Hilton May Not Return To 'RHOBH' — At Least Not Full Time
By Jake Viswanath
Kanye West Apologizes To Kim K "For Any Stress I Have Caused" In Rare Interview
By Jake Viswanath
Jason Derulo Is Launching A New Singing Show In The UK
By Maxine Harrison
20 Years Later, Kelly Clarkson & 'American Idol' Judges Reunite For Her Hollywood Walk Of Fame Star
By Radhika Menon
Get Even More From Bustle — Sign Up For The Newsletter