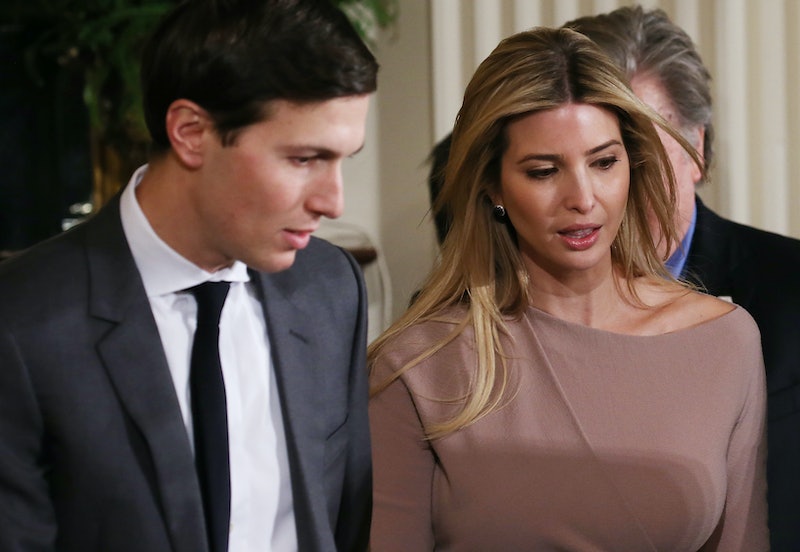 Over the weekend, Ivanka Trump and Jared Kushner made headlines for attending the late Sen. John McCain's funeral, despite the fact that President Trump was intentionally not invited. While reports circulated that their invites were cleared by the family, Abby Huntsman says Ivanka and Kushner attending McCain's funeral was much more awkward than initially believed.

"I spoke to Meghan about this,” Huntsman said during her first episode as a co-host of The View. "And the family — look, I’m sure they had final approval of everything, if they had it their way — as was evident in the tone of the funeral — they probably would rather not have had anyone from the Trump family present."

Huntsman, whose father is the U.S. ambassador to Russia, has said she is very close with Meghan McCain, describing her recently as a "sister."

"They still showed up, and I gotta say there were a number of moments that were awkward, I'm sure, for them to be sitting there," Huntsman said of Ivanka and Kushner. "And there were a number of shots, whether they mentioned it by name or not, about Make America Great Again, about how the country has seemed to change in a way, and getting back to this 'love of country' that was directed, mainly, at what's going on."

Since President Trump was not included in funeral services, many were surprised to see Ivanka and Kushner present. Initially, reports suggested that Sen. Lindsey Graham invited the couple, though the senator has rebuffed such claims. Either way, Huntsman was correct when she said that some of those who spoke at the services appeared to take swipes at the current administration, for whom both Ivanka and Kushner currently work. Among those to do so was Meghan.

"The America of John McCain has no need to be made great again, because America was always great," Meghan said, according to The Washington Post, in a reference to Trump's campaign slogan, "Make America Great Again."

During her eulogy, Meghan also said her father had represented "American greatness." To her, she said, her father was "the real thing, not cheap rhetoric from men who will never come near the sacrifice he gave so willingly, nor the opportunistic appropriation of those who lived lives of comfort and privilege while he suffered and served."

Meghan appeared to be referencing her father's service in the military during Vietnam, something Trump reportedly avoided.

As for Tuesday's episode of The View, when asked whether or not Cindy McCain approved the invitation for Ivanka and Kushner, Huntsman didn't respond. Instead, she discussed what it must be like to be Meghan, whose father is a veteran, and whose father's military career has been criticized by President Trump.

Whether or not Ivanka and her husband should have attended the funeral will likely remain a contentious topic for years to come. But for now, the impetus behind their invitation remains a mystery, and it's not clear whether that will ever change.