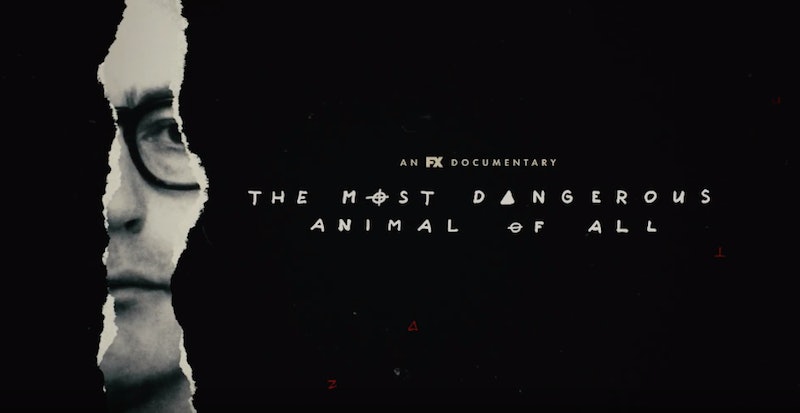 The mystery surrounding the identity of the Zodiac Killer has existed for several decades, but how many people have been so consumed by the case that they think the man responsible could be their dad? The trailer for FX's true crime docuseries The Most Dangerous Animal of All asks this very question. Based on The New York Times best-selling book by the same name, the four-episode series dives headfirst into the research of Gary L. Stewart, a man who attempted to track down the father he never knew, which ultimately leads him to a shocking realization.

The Zodiac Killer is an infamous serial killer who terrorized the northern part of California from the late '60s through the early '70s. (He's linked to at least five murders, though he claims to have killed 37 people total.) Apart from his murders, he was known for his calling card, letters sent to the police detailing his crimes, all of which were signed with the Zodiac symbol. In fact, some of the notes included cryptograms and ciphers, which supposedly were supposed to provide clues to his true identity. No one was ever able to determine for sure who exactly the Zodiac Killer was, but Stewart is convinced that the man in question is his biological father, Earl Van Best, Jr., and he claims to have some pretty compelling evidence to back it up.

In the footage, Stewart remarks how he immediately saw his father's name in one of the Zodiac Killer's cyphers. The two men also appear to have the same exact hand-writing, the same fingerprint scar, and a 99 percent probability of their DNA matching. That's just the starting point of Stewart's research, which took him a total of 12 years to collect. It's also worth noting that Van Best, Jr.'s name is one of the three main suspects that have dominated most of the theories surrounding the Zodiac Killer's identity, lending further support to Stewart's compelling claim.

The official description of the docuseries called the project "an honest depiction of true life and true crime unexpectedly merging to upend one man’s understanding of his own identity." Whether or not Stewart's findings prove to be true remains to be seen, but it would be nice to finally see this infamous criminal get unmasked once and for all.

More like this
What Is 'Pretty Wild' Star Tess Taylor Up To Now?
By Morgan Leigh Davies
Where Is Armie Hammer’s Ex-Wife Elizabeth Chambers Now After 'House Of Hammer'?
By Grace Wehniainen and Radhika Menon
What’s New On Netflix: Ana De Armas’ 'Blonde' & A Nick Kroll Special
By Arya Roshanian
Here’s Everything Coming To & Leaving Netflix In October
By Jake Viswanath
Get Even More From Bustle — Sign Up For The Newsletter