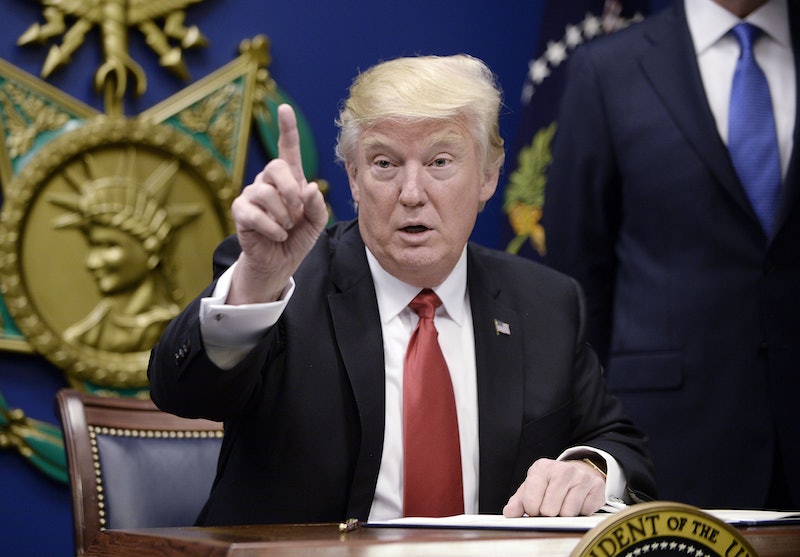 President Trump's first batch of executive orders address everything from construction of a border wall to abortion funding, and they've outraged many on the left. In truth, this outrage may be a bit misplaced. The actual text of Trump's orders isn't nearly as substantive as he or his opponents are making them out to, and the most dangerous executive orders in history went far beyond anything Trump did in his first week.

In recent history, executive orders have become a favorite punching bag of whichever party doesn't currently control the White House. Many Republicans who expressed horror at Barack Obama's use of executive order have been perfectly fine with Trump employing the same tool, for instance. But while executive orders often draw criticism, they're rarely quite as nefarious as their critics make them out to be.

But there are exceptions. A couple of executive orders have had truly disastrous effects on the country. These only represent a minority of all such orders that presidents have signed, but even so, these ones were so catastrophic that we should, at the very least, scrutinize all executive orders and keep close track of what precisely comes of them.

Signed by Franklin Roosevelt in 1942, Executive Order 9066 authorized the extrajudicial imprisonment of Japanese-Americans on the West Coast, under the guise of "protection against espionage and against sabotage." This ultimately led to the forcible internment of 110,000 American citizens, an indelible stain on both Roosevelt's record and the country itself. Even J. Edgar Hoover thought it was unconstitutional.

Roosevelt also signed Executive Order 8807, which created the Office of Scientific Research and Development. That may sound innocuous, but it ultimately morphed into the Manhattan Project, which went on to create atomic bombs. In 1945, Roosevelt's successor Harry Truman dropped those bombs on non-military targets in Hiroshima and Nagasaki, killing over 200,000 Japanese civilians.

President Gerald Ford pardoned his predecessor Richard Nixon for any crimes Nixon may have committed while in office in conjunction with the Watergate scandal. Ford was widely criticized for this, as Nixon was loathed at the time. More importantly, this set a precedent for presidents giving their predecessors leniency for legally-questionable behavior, a precedent that's been followed several times since.

Technically, this wasn't an executive order; it was a functionally-similar tool called a presidential proclamation, which presidents can also use to force change unilaterally.

However, Obama rescinded that order on his second day in office. He did so via an executive order of his own — a reminder that, for all of the criticism they get, executive orders can be used for good as well as evil.