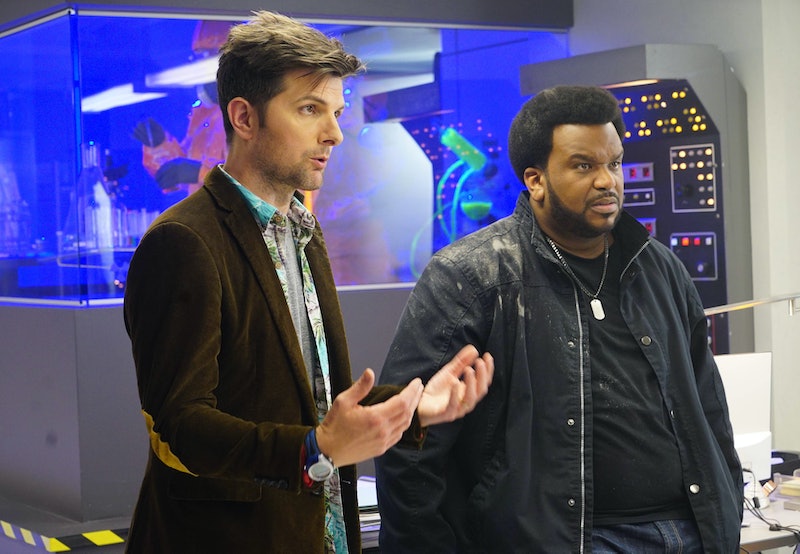 While the attraction of FOX's new show Ghosted, which premiered Oct. 1, is the chemistry between stars Adam Scott and Craig Robinson, you may want to acquaint yourself with a different type of science — astrophysics, to be exact — after watching its debut. Spoilers for the premiere of Ghosted follow. Scott's character, Dr. Max Jennifer, becomes an agent for the Bureau Underground due to his study of the multiverse. What is the multiverse, you ask? Well, that's a fair question and not one easily answered just yet when it comes to how Ghosted will handle it. But even if you had no clue that real theories about the multiverse exist (they do), the multiverse is very real on Ghosted and it's worth acquainting yourself with this parallel universe theory if you want to make the most of this new comedy.

Throughout sci-fi entertainment, multiverses have been explored — most recently in Marvel's Doctor Strange and Stephen King's The Dark Tower — and simply put, the multiverse is the theory that other universes that humans cannot perceive are real. Ghosted takes no time jumping right into the fact that the paranormal is real on the show, so viewers need to get on board with the unexplained right away. And if you were feeling that Ghosted is like a buddy comedy version of another FOX show, Fringe (how I miss thee!), that assessment is actually incredibly spot-on, as proven by Ghosted focusing on the truth behind parallel universes.

In an interview with Den Of Geek, Ghosted creator Tom Gormican said, "The multiverse plays into the overarching mythology of the show," while admitting that tackling multiverses and mythologies is rare for a half-hour comedy. Yet, if the premiere episode is any proof, the multiverse is essential to the story of Ghosted. After all, it's the catalyst for why Scott's Max and Robinson's Leroy Wright join the secret government agency, the Bureau Underground. After Agent Checker presumably gets sucked into the multiverse by aliens, Max and Leroy are brought in to help investigate.

While Leroy is an expert in missing persons cases, Max was a professor at Stanford University in astrophysics before he was fired for his radical ideas. He says he wrote "the book" on the multiverse and he means that literally since Checker was reading Max's book, The Multiverse Equation, before he was abducted. All within the first episode, Max and Leroy discover that these beings from another universe are using magnetic coils to siphon electricity in order to transport humans into their universe.

Max's theory is that the red light that appears during these paranormal moments must be a multidimensional life force. And based on the experience of the Huge Dude (that's actually how he's listed in the credits), this life force can temporarily take over a human's mind and body and leave them with no memory of the incident. Interestingly enough, Max has his own red light experience when Leroy traps him in their car. Max is picked up by the red light energy, but is dropped before being transported anywhere. Is that because Max is special? As one of the only people who even believes in the multiverse, there may be a reason why he isn't brought to another universe.

Regardless, Leroy and Max decide to stay on with the Bureau Underground to continue investigating Checker's disappearance and the multiverse. And that's even before Max discovers that his wife, whom he claimed was abducted by aliens, is being monitored by the Bureau for having a similar abduction experience as the Huge Dude. That means that the title of this show (at least for now) has less to do with actual ghosts and more to do with the act of "ghosting" — or disappearing without a trace. And now it's up to Max and Leroy to find the universe where these people are being abducted to.