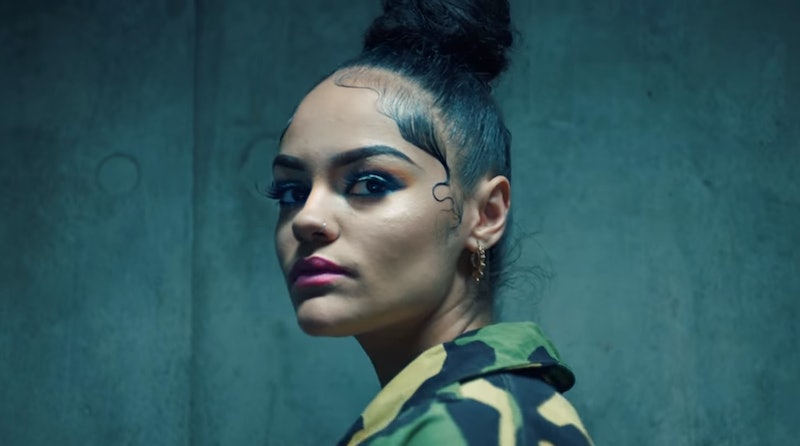 If you've ever wanted to rock a magenta eyeshadow in the middle of the workday but wiped it off because you were scared of the looks you were going to get, you're not alone. That's where Sleek MakeUP's 'My Face My Rules' campaign comes in, created by the UK-based cosmetics brand in an effort to encourage people to express themselves however they want, societal judgments be damned.

In the ad, Sleek MakeUP celebrates people's right to self-expression, individuality, and creativity. Featuring a beautifully diverse cast, the brand reached out to customers rather than models to star in their ad. The campaign also highlighted people of diverse ethnicities, genders, sexualities, body types, and life stages (shout out to the mom!).

The opening scenes show a different array of people waking up and sitting in front of their mirror to glow up. They express themselves through colors, glitter, fake eyelashes, lippies, and highlighters, and walk into the world feeling secure even as strangers gawk at them as they pass. Arguably, the best part is the fact that people gawk, and those featured just turn away smiling, rocking that magenta eyeshadow like it's NBD.

According to a new survey conducted by Sleek MakeUP and Ditch the Label, an anti-bullying charity, one in three people have felt judged for the makeup they wear. This means there are plenty of people out there leaving the neon eyeliner and blue lipstick in the back of the drawer, even if they really, really want to play with it.

But the most eccentric colors in your palette aside, makeup shaming doesn't only happen to avant garde beauty trends. It also happens to mothers who don't want to play respectability politics, men who want to break gender norms, members of the LGBTQ community that want to stand out rather than blend in, and people of all races who might not be playing by the rules of society's beauty standards.

There have been viral campaigns in the past that have pushed back against this knee-jerk societal reaction to judge anyone who wears more than the approved-upon amount of eyeliner. For example, in 2015 beauty vlogger NikkieTutorials created a campaign that encouraged people to only paint half of their face as a way to show that people wear makeup because they love it, not because we're hiding or trying to trick people with a "false" appearance. Then in 2017. CoverGirl launched Project PDA to encourage people to put their cosmetics on in public as a way to push back against the stigma of wearing makeup.

And while some might feel like these judgments might be inconsequential, when you look at the statistics, the reality seems pretty problematic. A survey by YouGov found that 55 percent of U.S. adults feel that women mainly wear makeup in order to trick people into thinking they’re more attractive. Even more specific, 63 percent of men feel this way.

On top of that, 43 percent of Americans think that women wear too much makeup. When such a significant amount of the population is trying to control individuals that want to express themselves in a way the status quo might not necessarily approve of, it's important to have a campaign that gives people the strength be brave and be themselves.

In addition to the ad spot, the brand also asked real customers what makeup meant to them, and what they had to say to the people judging their passion and expression. The brand then asked people to use the #MyFaceMyRules hashtag to spread acceptance and self-expression throughout the makeup community. Nearly 2,000 people have showed their amazing makeup looks on Instagram already.

Never forget there's beauty in expressing yourself, no matter what the haters say.