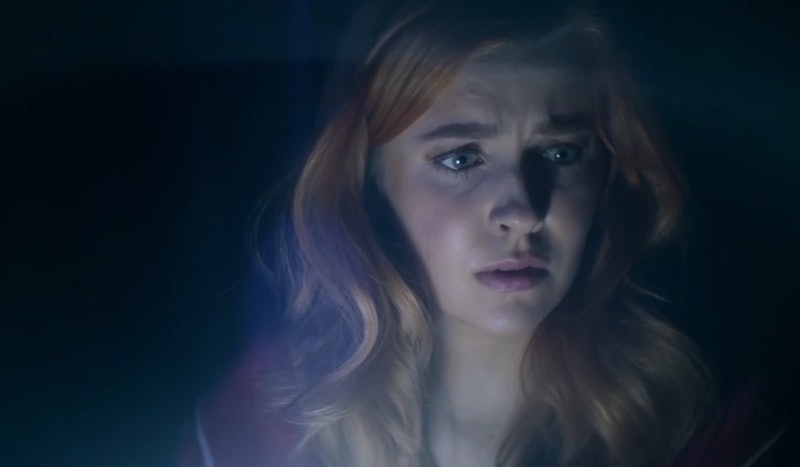 This one's sure to be killer. The CW's Nancy Drew TV show trailer opens telling the story of Dead Lucy, Horseshoe Bay's "most infamous Sea Queen" who "wore her crown for only one night." Cue some dark nighttime imagery of a young girl plunging from a cliff into the water below. This ghost isn't from a bygone era, as these things tend to go, however. A glimpse of Lucy Sable's gravestone reveals that she died in 2000 at just 17 years old. Immediately, it's evident to viewers that this incarnation of the beloved teen crime mysteries will be much darker and spookier than the ones you read in Carolyn Keene's beloved YA novels, which kicked off all the way back in 1930.

Sure to complicate matters: Nancy Drew (played by Kennedy McMann in the forthcoming Fall 2019 Riverdale-esque series) explains in the new clip that, though the locals are convinced that Dead Lucy still haunts the town, she doesn't believe in ghosts. How much do you want to bet that her views soon change?

For context, a press release from The CW notes that the devastation from her mother's untimely death derails the brilliant teenage detective's college plans, causing her to remain in her Maine hometown. What's more: Devastated by her mom's passing, Nancy swears off crime solving.

That is, of course, until a local socialite winds up dead. As seen in the trailer, Nancy and a group of her friends seem to find her dead body lying in the street beside a car, and — gasp — somehow become the prime suspects in the murder.

When the crew is yanked from the diner where Nancy works as a waitress into the police station, a contemptuous cop gives the crew the following descriptors. There's George Fan (Leah Lewis), the "town screw-up"; Ned “Nick” Nickerson (Tunji Kasim), an "ex con"; and Bess Marvin (Maddison Jaizani), the "city girl." Although he's not in the station for some reason, The CW describes the group's fifth member, Ace (Alex Saxon), as an "amiable burnout."

This police officer clearly has it out for Nancy, too, saying she "used to complicate my job." Fires back to protagonist, "You mean, do it for you."

Oh, and what would a CW show be without a little teen romance, too? When Nancy's sleuthing to clear her name began by break into the late socialite husband's house (because, of course you have to suspect the husband), Nick appears to help her escape. As the trailer soon reveals, the pair becomes romantically involved, showing them kissing and Nancy taking off her top.

But back to the ghost thing. The skeptical Nancy soon seems to become a believer in the supernatural, as she stares at her reflection in a storefront window (at nighttime, natch) and Dead Lucy's crown seems to appear on her head.

What follows are arguably the trailer's creepiest moments. While in a dark house — armed only with a flashlight — a solo Nancy is lead to an attic when a ceiling door mysteriously falls open. As she begins to tear away at the wallpaper, there's a hidden message about Lucy's murder scrawled across the wall, ending with a cryptic "hope" that "the killer doesn't get you." Sure to send shivers down your spine, a child's voice can be heard delivering the same line.

Add in a chest containing a bloody white dress, a haunting voice whispering, and finally the appearance of a ghostly figure directly behind Nancy in the dark attic, and the spookfest is officially on.

The trailer may end there, but it's surely only the beginning for Nancy — though fans will have to wait until Wednesdays this fall to find out more.

More like this
'Fate: The Winx Saga’s Cliffhanger All But Begs For A Season 3 Renewal
By Brad Witter
A New 'And Just Like That' Table Read Pic Confirms A Key Character's Return
By Jack Irvin and Grace Wehniainen
HSMTMTS Season 4 Will Include A Major Nod To The Original 'High School Musical' Movies
By Brad Witter
The First 'Percy Jackson & The Olympians' Teaser Comes With An Ominous Warning
By Grace Wehniainen
Get Even More From Bustle — Sign Up For The Newsletter