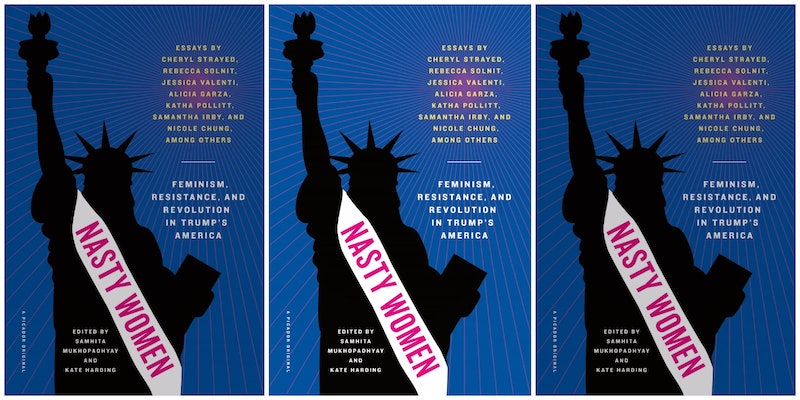 It's almost unbelievable that it's been over a year since the phrase "nasty woman" was introduced into our collective lexicon. In those months — months in which Hillary Clinton lost the presidency, months in which Donald Trump took office, months in which the new president announced rollbacks on the fundamental rights of Americans — that phrase has undergone a dramatic shift in connotation. It began as an insult; it almost immediately transformed into a rallying cry; and now, eight months into the Donald Trump presidency, it exists as a symbol of the resistance. In Kate Harding and Samhita Mukhopadhyay's new anthology Nasty Women: Feminism, Resistance, and Revolution in Trump's America, 23 feminist writers share their thoughts on what it means to be a nasty woman.

Harding, the author of Asking for It: The Alarming Rise of Rape Culture and What We Can Do About It, and Mukhopadhyay, the Senior Editorial Director of Culture and Identities at Mic, were inspired to compile these essays in the days after Hillary Clinton lost the election, when, as many women likely remember, a wave of grief, doubt, and shock fogged over many Americans. Before election night, both writers had been working on stories about the first female president.

But then there wasn't a female president. There was just Donald Trump.

In her essay, "I'm A Woman, Vote For Me," Mukhopadhyay describes the moment when she realized Clinton had lost and that she must return to the Mic office. She had gathered at Javits Center in New York City for the celebration victory that was supposed to take place under the gleaming convention center's sky-high glass ceilings. "By now, small groups of women were sitting on the ground crying; hundreds left the building in droves," she writes. "Amid the chaos, I realized I had to make my way back to the office. We had to rewrite everything. Donald Trump was going to be president."

"It was very difficult," she tells Bustle in an email. "I was personally devastated but had to put my personal feelings to the side to report out what was happening. Additionally, the newsroom I was working in was really diverse, I had queer writers, young writers, women, people of color who were all struggling with the night’s outcomes, but as journalists we had to put that to the side and write out what happened and reflect on how and what the next year would look so different."

A few days later, when the fog of confusion and grief had cleared a bit, the two decided to do something about all those pieces they had prepared. "Within a day or two of the election, we were lamenting the essays we wrote but didn’t get to publish about the importance of having elected our first woman president," Harding tells Bustle. "I said, 'Haha, we should do an anthology,' and Samhita was like, 'No, really, we should!'"

The two began to assemble a team of prominent feminist writers, eventually securing Cheryl Strayed, Rebecca Solnit, Nicole Chung, and Jessica Valenti to write essays for the anthology. "At the individual level, I wanted not just strong voices, but strong writers," Harding says. "There are a lot of people who can write powerful opinion pieces, but not fully realized essays. I didn’t want to collect a bunch of hot takes we could have run on a pop-up website three days after the election. I wanted to give readers the pleasure of a beautifully written book."

Both women also understood the importance of representing a wide variety of American experiences. The editors were particularly careful about making space in the book for the voices of marginalized women, like Asian-American writer Nicole Chung, African-American writer Samantha Irby, queer Muslim writer Randa Jarrar, and trans writer Meredith Talusan, among others. "Diversity mattered a lot because we were fighting back against a growing narrative that identity politics (or voting for Hillary because she is a woman or against Trump because of racism) was somehow a bad thing for the left to embrace," Mukhopadhyay says. "We wanted to show the diversity of opinions (often disagreeing) but that as the left we have to be able to hold all these voices and, in fact, centralize the most marginalized."

However, it isn't only the marginalized women who write about deconstructing systems of racism, classism, and other forms of oppression. It's clear that this book is also a call-to-action for white women to do their part to secure the livelihood and equality of those with less privilege. "I think every woman has a different role to play, according to her own lived experience and priorities," Harding says. "White women have a responsibility to use our privilege to advocate for those who don’t share it — to challenge the status quo, stand up to racist relatives, and always be asking why there aren’t more people of color at the table, even if it sometimes means giving up our own seats to make room."

Ultimately, however, the anthology is intended to stress the "collective struggle of women" and provide a road map for what comes next. Harding says, "Ideally, we can come together as a group and talk about the different challenges we face, and disagree with each other and get upset with each other, while recognizing that whatever different boots we have (or don’t) on our necks, we all have this one in common."

This idea is laid out most starkly in the last essay, Nicole Chung's "All American." In it, Chung writes of the uniquely painful experience of being a marginalized woman adopted and raised by white parents with family members who voted for Donald Trump. The pain is compounded by the fact that Chung's child is autistic, and their rights and their education will come under attack under the Trump administration. Chung writes of her struggle to confront her family about their beliefs.

"For all our political battles over the years — as I have crept further to the left of anyone the Democratic Party would actually nominate, and my relatives have moved in the opposite direction — 2016 was the first year I even attempted to sway my parents’ presidential votes. In my otherwise brutally honest, filterless family, one’s vote is still seen as a private, almost hallowed decision, and some residual conditioning from childhood had always prompted me to stop just short of saying, “This is who you should vote for,” or “Please don’t vote for that person.” But this election felt different. I knew I had to try and convince them not to vote for Trump, even if they resented me for it.

The essay ends with a small victory. In an email, Chung's mother reveals that she has contacted her representative to ask them to support the education of "our special needs children."

"It’s a short email. She doesn’t ask me for any more action items. Maybe she even hopes I won’t respond. In my head, though, I’m already composing my response. Thanks, Mom. That’s great. Here’s what you can do next."

"Nicole strikes such a nice balance in the essay and I think brings home how much of the change we seek will happen in our everyday interactions," Mukhopadhyay says. "Her final sentence really brings it home, even after that small win with her mother, she knows her follow-up will be another action. To me that’s a metaphor for how we will move forward from this moment."

"I hope [readers] feel both hopeful and are humbled by the task ahead," Mukhopadhyay says. "I hope they are more open to hearing the nuances within the left: we have our work cut out for us but I think understanding where different perspectives are coming from is a step in the right direction."