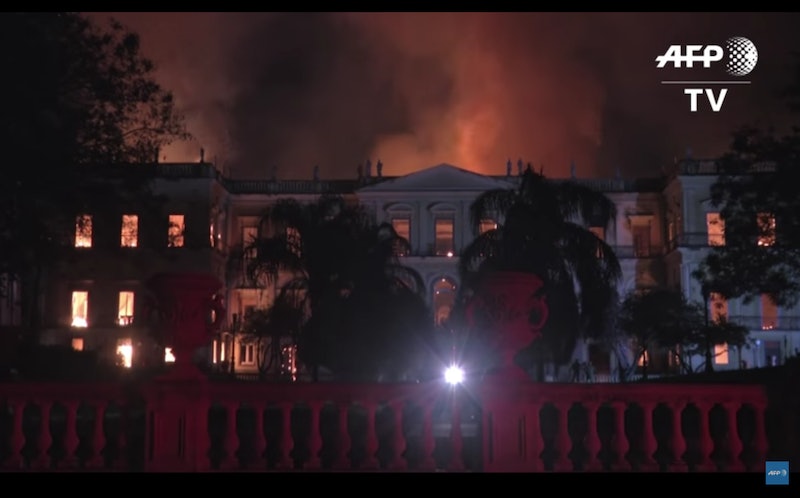 Tragedy struck in South America on Sunday evening, as the National Museum of Brazil caught on fire after visiting hours had concluded for the day. The damage from the fire is expected to be quite profound, with some estimating that the museum's entire collection may be destroyed. As Deutsche Welle (DW) reported, firefighters are currently still in the process of completely extinguishing the blaze.

DW added that, after five hours of battling the fire, Brazilian firefighters were finally able to control the blaze, with CNN noting that firefighters from seven different stations were on the scene throughout Sunday evening. However, parts of the building were still burning and continuing to be extinguished at the time of publication.

Rio’s fire chief Colonel Roberto Robaday suggested to The Guardian that lack of accesible water caused problems for firefighters as they sought to battle the flames. “The two nearest hydrants had no supplies ... Water trucks were brought in and water used from a nearby lake," he told the paper. "This is an old building ... with a lot of flammable material, lots of wood and the documents and the archive itself," he added.

Brazil's National Museum is home to over 20 million artifacts and, as the BBC reported, it's feared that the museum's entire collection may have been destroyed by Sunday's blaze. The museum was created in 1818 and holds relics from Brazil as well as ancient Rome, Egypt, and Greece, as noted by DW. As CNET reported, some of its most famous artifacts include the 12,000-year-old remains of "Luzia," Brazil's oldest human fossil, and 5.5-ton meteorite that was found in Brazil in the 1700's.

According to DW, Brazil's National Museum is one of the oldest museums in South America. The building also previously served as a home for Portugal's royal family and Brazil's imperial family. However, as the outlet noted, in recent years, the museum had suffered from funding issues.

Following news of the fire, The Guardian reported that Brazil's president, Michel Temer, lamented the potential staggering loss of historical items on Sunday. As Temer tweeted, "Today is a tragic day for the museology of our country ... Two hundred years of work research and knowledge were lost.”

Museum employees also expressed their devastation about the fire and the presumed profound loss of artifacts. Marco Aurelio Caldas, a museologist who has been employed at the museum for over nine years, told Agencia Brasil, "This is 200 years of work of a scientific institution, the most important one in Latin America. Everything is finished. Our work, our life was all in there."

Brazilian officials should have a full sense of the extent of the damage once the fire is completely extinguished. However, based on the observations of many from Sunday evening, the historical losses stemming from the fire are likely quite staggering — and constitute a national tragedy.