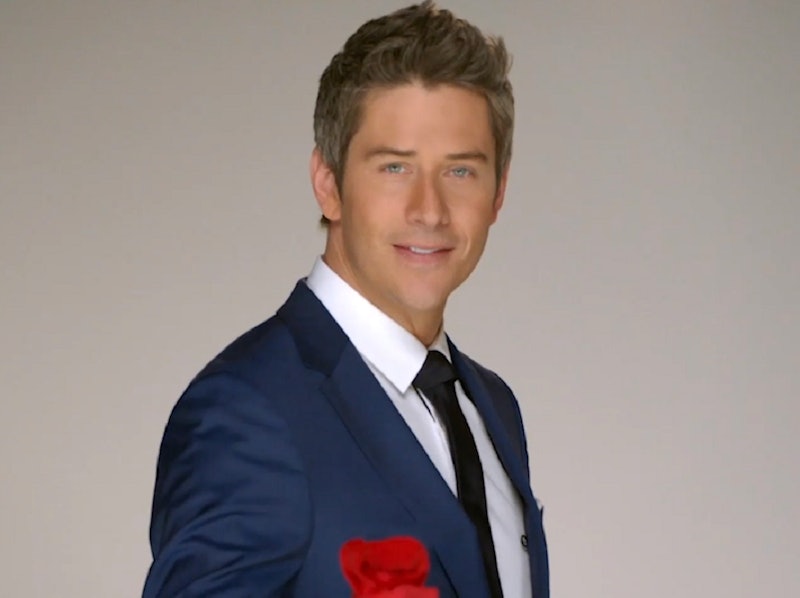 There are some crushes that your heart never quite loses grip of, and a new Bachelor promo featuring Arie Luyendyk Jr. is sure to remind you of his crushing yet swoon-worthy stint on The Bachelorette. The promo, which provides plenty of gratuitous shots of the Dutch dreamboat looking ludicrously handsome, also offers a handy reminder of his heartbreaking split from Emily Maynard in The Bachelorette five years ago. And guys, the promo dredges up some serious feelings from that time. In fact, it's impossible to be reminded of that moment in reality TV history without clutching at your chest with sadness and thinking, my goodness, that glorious man deserves to find happiness. You can watch the clip here.

Highlighting the tentative romance between Maynard and Luyendyk from "their first one-on-one to the blindsiding breakup," the promo reminds viewers just how heart-shattering that season was. Particularly in seeing Maynard tell Luyendyk, "It was going to be me and you, and I don't know anymore," followed by droves of tears from both parties. Five years might seem like a long time, but it's clearly not so long that our hearts aren't still melting for this man. Especially if you can remember just how hard you may have been rooting for him during Maynard's Bachelorette season. But just in case you can't remember, let's do a little recap.

Firstly, Luyendyk's first date with Maynard was incredible. In fact, incredible doesn't even do it justice. Their outing was nothing short of being the textbook definition of dream date. For starters, they went to Dollywood, which is exactly the sort of place that true love is forged. They enjoyed some serious smooching beside a carousel in a scene that looked like something from a Disney movie. And then Dolly Parton showed up like the Fairy Godmother of love and blessed the romantic union with a private show. It was perfection.

Of course, while there was clearly a magical connection between the two, it wasn't completely smooth sailing. The two wandered the romantic streets of Prague in a highly coveted one-on-one date, dotted with numerous kisses throughout the city streets. However, Maynard also voiced her concerns about a secret that Luyendyk was keeping from her involving a Bachelorette producer that he'd dated. Suffice to say, there was drama.

All drama aside, however, Luyendyk would continue to sneak kisses from Maynard, and romance her with those sweet lips of his. So much so that he earned the nickname of The Kissing Bandit. Everything seemed to be going well to the point that it seemed pretty obvious that Luyendyk was probably going to win Maynard's final rose and live happily ever after her — except that didn't happen. Instead, the Season 8 Bachelorette chose Jef Holm (the two sadly broke up in 2012), leaving Luyendyk as the runner-up.

If you're eager to relive the romance and devastation of that season, or if you didn't get to enjoy it the first time around, then as this latest Bachelor promo urges, you can always marathon watch season eight of The Bachelorette on the ABC app.

Admittedly, most Bachelor fans were a little shocked when Luyendyk was announced as the next suitor we'll all be pining for when the show premieres in January 2018. But in retrospect, he's actually completely perfect. For those of us who saw his Bachelorette season, we might have struggled to remember just how great he was. And for those who didn't see it, the race car driver and real estate agent remained something of a mystery.

But, mystery solved: This guy is no enigma. And he's definitely not forgettable. Here's hoping he puts his kissing skills to good use in finding a fantastic woman to share in an epic and lasting romance with him when his Bachelor season finally airs. And if Dollywood wants to leave their doors open to him so he can rekindle some of that past magic, then that wouldn't be altogether unpleasant either.