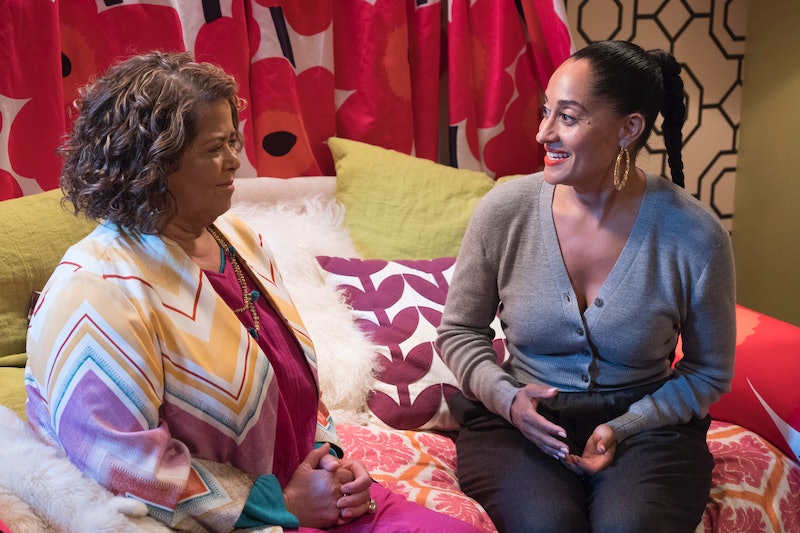 Here's some news that black-ish fans are really going to love. On Friday, May 3, The Hollywood Reporter revealed that the hit ABC series is receiving another offshoot guaranteed to resonate with fans in a brand new way. The new black-ish spinoff, titled mixed-ish, will revolve around a younger version of Tracee Ellis Ross' character, Dr. Rainbow Johnson and her experience growing up in a mixed-race family during the '80s.

According to The Hollywood Reporter, the show will focus on the issues Bow and her siblings face when her parents, Paul and Alicia, decide to move the family from a hippie commune to the suburbs. The storyline will follow Bow and her younger brother and sister as they are plagued with identity crisis, attempting to navigate their new life, all while not being fully perceived as either black or white.

Although details surrounding the series remain relatively scarce, Entertainment Weekly noted that the role of Rainbow will be played by Arica Himmell, while Tika Sumpter, Christina Anthony, Mykal-Michelle Harris, and Ethan Childress round out the remainder of the cast.

Earlier this year, Variety reported that Anders Holm had signed on to play Paul, Rainbow’s father, while Sumpter would play her mother, Alicia. However, THR reported that Holm's role is in the process of recast because producers have opted to move in a different direction. The older versions of Bow’s parents, Paul and Alicia, are played on black-ish by Anna Deavere Smith and Beau Bridges.

At the moment, it's unclear whether or not Tracee Ellis Ross, Anthony Anderson (Bow's husband, Andre Johnson), or any other members of the black-ish cast will make appearances on the series, especially given the nearly three decade time differential between the two series. There's also potential for Rashida Jones and Daveed Diggs, who played Bow's adult siblings on black-ish, to appear on the new show.

An airdate for the new series has not been announced just yet, although it seems that it will likely debut sometime next fall. ABC had initially intended to air a “Becoming Bow” episode of black-ish on May 7 as a potential backdoor pilot for the prequel. However, now it seems that the episode will be held for next season, according to Deadline.

Everything about this announcement is just so exciting, making next season's premiere feel that much further away. When it debuts, mixed-ish will become the second show to come from the black-ish universe, joining its first spinoff grown-ish, which is now in its second season at the ABC adjacent network, Freeform. If the popularity of that series, featuring Yara Shahidi as Zoey Johnson, is any indication, mixed-ish is sure to be another bonafide hit for the franchise.

The show will also have a familiar team in place to keep all of the Johnson family narratives on track. Black-ish executive producer Peter Saji and creator Kenya Barris co-created the series and jointly wrote the show's script. The duo will also produce the series alongside black-ish stars, Tracee Ellis Ross, Anthony Anderson, and Laurence Fishburne, as well as Randall Winston and Brian Dobbins.

Fans will have to wait a little longer for mixed-ish, but just knowing that we'll get to see what exactly helped shape Rainbow into the amazing mother, wife, doctor, and person we've all come to love on black-ish is more than enough for now.

More like this
Nicola Coughlan Shared A Lady Whistledown Excerpt From ‘Bridgerton’ Season 3
By Grace Wehniainen, Alyssa Lapid and Sam Ramsden
The 'Bachelor In Paradise' Schedule Shifts To 4 Hours Every Week After The Season 8 Premiere
By Brad Witter
The New Bachelor Will Be Announced Next Week & Here Are The Top Contenders
By Grace Wehniainen
The 'Andor' Timeline, Explained
By Gretchen Smail
Get Even More From Bustle — Sign Up For The Newsletter