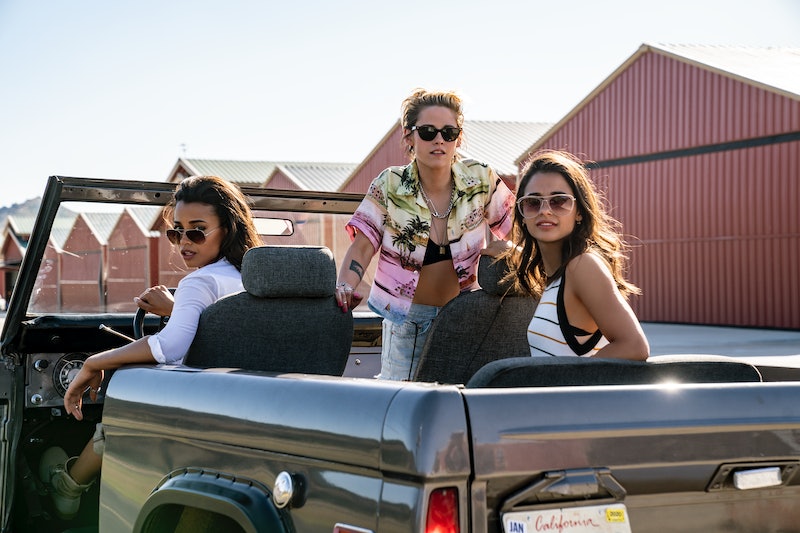 Charlie's Angels are back once again. Or, rather, they're still going. The new Charlie's Angels movie isn't a reboot but an extension of a world that already exists. This means that the Angels in the Nov. 15 release aren't meant to replace the previous sets of crime fighters from the '70s or the 2000s, but just join their ranks. Rest assured that Farrah Fawcett, Lucy Liu, and Destiny's Child singing about "all the honeys, who making money" still exist in this reality.

Charlie's Angels will show what happens when the security and investigative agency started by the elusive Charles Townsend way back when goes international. According to the film's official description, "With the world’s smartest, bravest, and most highly trained women all over the globe, there are now teams of Angels guided by multiple Bosleys taking on the toughest jobs everywhere."

This means that the previous groups of Angels from the original television series and from the 2000 and 2003 films are part of the history of the agency, with this movie just focusing on one particular, newly formed group that consists of Sabina (Kristen Stewart), Jane (Ella Balinska), and Elena (Naomi Scott). "Bosley" is a rank in this era of the agency; the team leaders featured in the new movie are played by Djimon Hounsou, Patrick Stewart, and the film's writer and director Elizabeth Banks.

"All of the Angels have been played by different women and have had different names, but the Bosley character was always named Bosley no matter who played him," Banks told Entertainment Weekly in April 2019. "We thought, 'Well, that must mean it's more than a name.'"

Also, as producer Max Handelman explained to reporters during a set visit, Banks' character is the first Angel to have become a Bosley.

Banks decided to go the route that she did — not altering the reality of the existing Charlie's Angels media — in part, because she was a fan of the original series. "I'm not old enough to have watched the first run of the television show, but my two sisters and I did watch reruns," she told The Hollywood Reporter. "The three of us getting to pretend we were Charlie's Angels was so inspirational. It's a show about women doing a job that very few women had ever done before, which was detective work, whether on television or in real life."

She also told THR that she wasn't worried about the idea that Hollywood does too many "reboots" when it came to this film, for one, because it's a "continuation of a story ... that has really great DNA", but also because it will expand the franchise to younger viewers. As she put it, "It's the next generation's turn to have Angels."

More like this
Gerard Butler Insisted On Adding This Pivotal Scene To 'Plane'
By Catharina Cheung
Jemima Khan Used Her Own Life As Inspo For 'What’s Love Got To Do With It?'
By Darshita Goyal
Vanessa Hudgens Is Reportedly Engaged To Cole Tucker
By Jake Viswanath
Alicia Silverstone Revives Her 'Clueless' Character In This Super Bowl Commercial
By Jake Viswanath
Get Even More From Bustle — Sign Up For The Newsletter
From hair trends to relationship advice, our daily newsletter has everything you need to sound like a person who’s on TikTok, even if you aren’t.