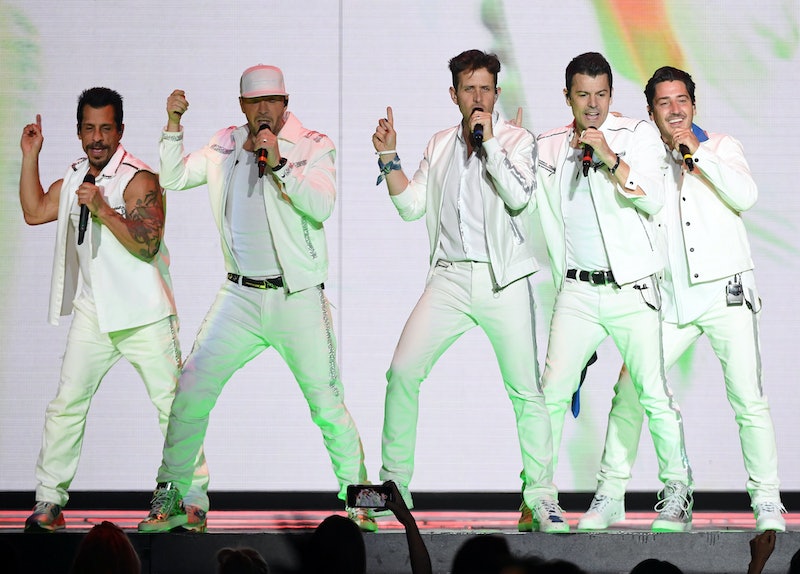 The Jonas Brothers have returned, New Kids on the Block are on yet another arena tour, BTS is selling out stadiums around the world, and Backstreet’s back (alright!). It’s a great time for boy bands everywhere, but there’s one huge group missing from today’s music landscape — *NSYNC. Sure, they reunited at Coachella with Ariana Grande subbing in for Justin Timberlake, but the world is craving even more, including Donnie Wahlberg. In fact, the New Kids on the Block want *NSYNC to reunite, even if it means going on tour without Justin Timberlake, as Wahlberg said during a stop on the New Kids’ Mixtape Tour at the Hollywood Bowl.

During the star-studded show, the New Kids on the Block brought out *NSYNC member and long-time friend Lance Bass onstage to perform their boy band anthem, “Boys in the Band." Bass appeared as a professor in the very nostalgic music video for the track, so it was only natural that he would jump on stage with the band. And to make the crowd even more fired up, Wahlberg decided to make a very bold but completely necessary declaration.

“I know I’m gonna cause problems right now, but it's been a little too long without an *NSYNC reunion, I’m just saying,” Wahlberg said as the crowd erupted in cheers, as reported by Entertainment Tonight. “I’m just saying! I’m just saying! And if you can’t get the fifth guy, do it with four,” he claimed, referring to Timberlake. “We’ll still all come.”

Wahlberg isn’t the only throwback boy bander that wants to see *NSYNC back on stage with or without JT. Backstreet Boy Howie Dorough recently told Entertainment Tonight that he wanted Joey Fatone, JC Chasez, Chris Kirkpatrick, and Bass to get back together regardless of Timberlake’s involvement. In fact, there’s even been talk of a joint Backstreet Boys / *NSYNC tour, which very well might make every millennial explode with excitement.

“I’ve definitely talked with Joey [Fatone] before about us doing something,” Dorough said about the possibility of a co-headlining tour. “I’ve even encouraged them to go on themselves and keep performing. We were once four. I’m like, ‘Dude, if we can do it the four of us, so can you!’” (Backstreet Boy Kevin Richardson left the group in 2006, returning in 2012.)

It seems that everyone is in agreement that an *NSYNC reunion tour should be in the cards, but even Dorough understands how difficult it may be for the group to reunite without Timberlake, no matter how badly we want it.

“Obviously, Justin was a main lead in that group so I know it’s a little bit different,” Dorough told ET. “But I still think that there are fans out there, who would love to see them and who would hate for them not to continue on just because one other person is doing his own thing. So, I’m always encouraging them, and all the other groups from the past that are out there too. I feel like nowadays we only help each other continue the pop scene and the nostalgia.”

As proven by the New Kids' support of *NSYNC, and a slew of other collaborations over the past few years, the '90s boy banders truly have each other's backs. Hopefully, that camaraderie will encourage the boys of *NSYNC to reunite on their own terms, with or without Timberlake.

More like this
The Spice Girls Just Dropped A Brand New Music Video
By Sam Ramsden
Netflix Reveals First Look At Wednesday In The 'Addams Family' Spinoff Series
By Bustle Editors
Craig David Is Still Slicker Than Your Average
By Olivia-Anne Cleary
20 Years Later, Kelly Clarkson & 'American Idol' Judges Reunite For Her Hollywood Walk Of Fame Star
By Radhika Menon
Get Even More From Bustle — Sign Up For The Newsletter