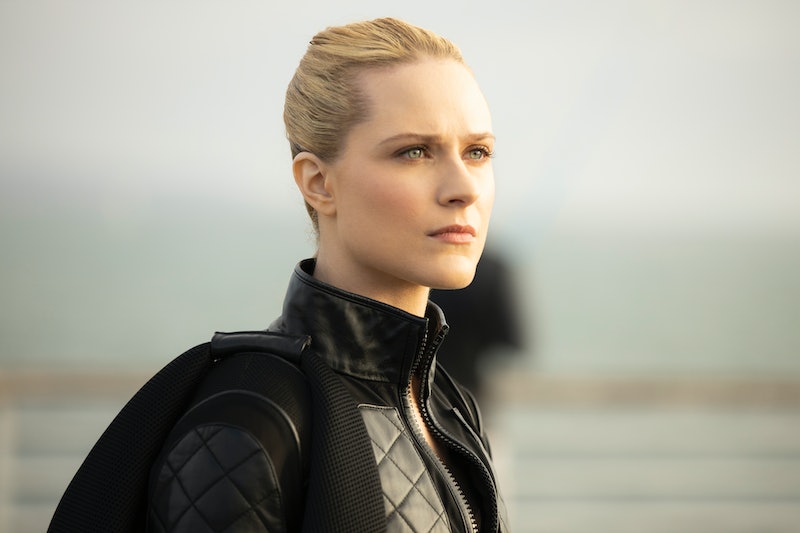 We're not in Westworld anymore. On Thursday, Feb. 20, HBO released a new look at the upcoming season of the hit sci-fi saga, and the Westworld Season 3 trailer pits Dolores and Maeve against each other in a battle for death — and freedom. The clip brings the hosts into the real world, where Dolores (Evan Rachel Wood) is preparing to lead a revolution against the humans while Maeve (Thandie Newton) is tasked with killing her before things go too far.

Of course, Dolores isn't alone: in addition to Aaron Paul's new character, construction worker Caleb, she seems to have recruited a couple of iconic characters to help her on her journey, including Ed Harris' Man in Black. "Five of us, against an entire world of them," Tessa Thompson's Charlotte Hale says at one point (or is she a Dolores host now?). "It'll be enough," Dolores responds, later telling someone that if her plan doesn't work, they'll do things "the old fashioned way ... I'll kill everyone."

While most of the trailer focuses on Dolores' fight for justice and freedom, the clip also teases a climactic showdown between her and Maeve on a bridge. "New gods are coming," Dolores says in a voiceover, while she approaches her fellow host. "And they're very angry."

Maeve isn't the only one looking to stop Dolores before her uprising goes too far; in a trailer released at San Diego Comic Con back in July, Bernard (Jeffrey Wright) says that he's looking for "someone strong enough" to stop the revolution and even Dolores herself — "if it comes to that." And, like Maeve, Bernard has also found himself in a brand new world, no longer functioning as a host, but as a guest.

"I'm excited to explore the idea of host as guests, as Bernard and Dolores are guests now," Wright told The Hollywood Reporter after the Season 2 finale, explaining that the show has managed to turn the worlds "upside down and inside out" by upending the roles and locations of the main characters. "I think the exploration now of [pretending to be] human inside this world as hosts could be rich territory."

While Bernard and Maeve are pretending to be humans, Dolores' journey outside the park and into the real world will also challenge everything she believes to be true about humanity as well. In a July interview with Entertainment Weekly, creator Jonathan Nolan teased that in addition to experiencing a "culture shock" by being out in the real world, Dolores' relationship with "Aaron’s character will challenge Dolores’ notions about the nature of humanity. He’s the type of person who doesn’t get to go to Westworld."

While it seems like Season 3 of Westworld will continue to ask big questions about humanity and morality, overall, the upcoming storyline should be much more straightforward than the infamously complicated plots of earlier seasons. "This is season is a little less of a guessing game and more of an experience with the hosts finally getting to meet their makers," Nolan told EW. However, fans can still probably expect quite a few dramatic twists and turns when Season 3 of Westworld premieres on March 15.

More like this
An 'Everything Everywhere All At Once' Star Just Joined The 'Loki' Season 2 Cast
By Grace Wehniainen
Nicola Coughlan Shared A Lady Whistledown Excerpt From ‘Bridgerton’ Season 3
By Grace Wehniainen, Alyssa Lapid and Sam Ramsden
The New Bachelor Will Be Announced Next Week & Here Are The Top Contenders
By Grace Wehniainen
The 'Andor' Timeline, Explained
By Gretchen Smail
Get Even More From Bustle — Sign Up For The Newsletter