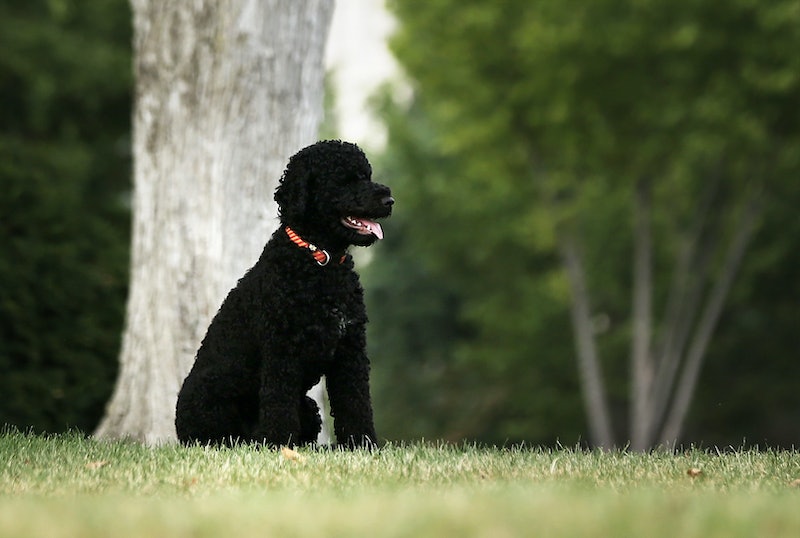 In her final days as a first family pet, Sunny Obama has generated some negative headlines. The 4-year-old female Portuguese Water Dog reportedly bit a White House guest on Monday. Described as a "family friend," the victim is an 18-year-old female who posted pictures on Instagram of her injury, a nasty-looking gash on one cheek.

This is not the first time Sunny's been in the news for her behavior. Back in 2013, shortly after she'd become an Obama pet, Sunny inadvertently knocked over a toddler during a Christmas decoration ceremony. But being a young dog of large size, that kind of mishap is not uncommon. No one was hurt, and the incident was clearly an accident.

According to PetMD.com, the personality of a Portuguese Water Dog is "gregarious" and "fun-loving." They are also described as enjoying human companionship, and being prone to good behavior around other dogs, as well as children. Since reports do not indicate that the injured White House guest was provoking Sunny in any way, it remains a mystery why the young dog attacked her.

Sunny isn't the first White House pet in history to bite a stranger. In the closing weeks of President George W. Bush's final term, his pet terrier Barney bit two White House visitors. One of his victims was John Decker, a TV reporter for Reuters. Decker said he tried to pet little Barney and got a quick bite on his finger as thanks. Barney's second target was Heather Walker, the PR Director for the Boston Celtics. She had come to the White House for an official ceremony in honor of the team's recent NBA Championship. Like Decker, she attempted to pet Barney. He bit her on the wrist, hard enough to cause bleeding.

Given more distant history involving presidents and their various animals, it is a wonder no one has ever been seriously harmed by White House pets. Presidential Pet Museum keeps a log of all past first pets, and some of the entries are hair-raising. Calvin Coolidge, for instance, had no less than 25 personal pets — 13 dogs, six birds, two cats, two raccoons (!), one donkey, and one bobcat. Yes, Coolidge had a bobcat, those wild felines not known for their friendliness. Add to that gifts Coolidge received in the form of animal specimens — two lion cubs, a wallaby, a pygmy hippo, and a black bear. Here's what I want to know: where exactly did all these creatures stay? Maybe Coolidge's staff didn't mind that he ended up a one-term president.

President Theodore Roosevelt is in contention with Coolidge for the most absurd number and range of White House animals. In his pet family were multiple snakes, two kangaroo rats, a flying squirrel, a badger, guinea pigs, and several horses and dogs. Wild animals included the following: lion, hyena, wildcat, coyote, bears, and a zebra. Perhaps they should have created a visitor zoo area.

At any rate, Sunny Obama is certainly not the first White House pet to generate controversy. Hopefully her recent bite won't cause serious damage to the victim, or the first family.